Are Our Parents Related (to each other)?

Jewish endogamy - the notion that all European Jews share the same ancestors multiple times - means more than that we are all related. It also means we are related to ourselves, probably multiple times. We cannot test that directly, but we can get a handle on whether our parents are related to one another. 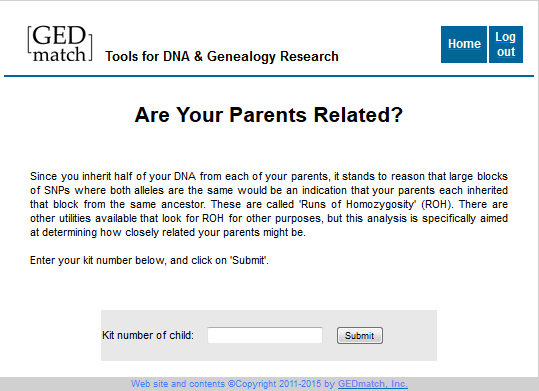 GEDmatch has a tool to do just that. It's probably the simplest tool they offer. No choices or options, just enter the kit number, click "submit" and the results appear in seconds.

As a control, we can look at six family members with one fully Jewisih parent and one fully non-Jewish parent. We would expect there to be no relationship at all between the parents in these six cases.

In fact, for all six, GEDmatch returned:


Largest segment = 0.0 cM
Total of segments > 7 cM = 0.0 cM
No shared DNA segments found
No indication that your parents are related.

We must note the words "No...found" and "No indication." That does not mean that they are definitely not related. Esther's father is from Rozdol and her mother is from nearby Drohobycz and I would expect them to show up as reasonably close. But Esther's kit produced the same negative results as the six. The same thing shows up for Dalia, whose parents are both from Buczacz.

As we know, DNA is diluted by half every generation and after five or six generations a person does not always carry traces of every ancestor. Some disappear, while others persist for many more generations. I do not know enough about Esther and Dalia's mothers' sides to say anything further.

Herb's parents' families, on the other hand, are from Skalat and Zalosce and I would expect a fairly close connection. His results show four segments shared by his parents.

A bit over 50 centiMorgans and a most recent common ancestor about four generations before them. That is, of course, an estimate. Instead of fourth cousins, they could be sixth cousins four times over, with each of the four matching segments representing a separate cousinhood.

On the other hand, if we could test Herb's late brother and sister - or his parents themselves - we might find additional matching segments.

So let's look at two cases where we have full siblings who tested.

Uncle Bob's kit shows a slightly larger segment, starting about three million earlier and ending in the same place as Aunt Betty's. His 12.4 cM shows my grandparents to be about halfway between fifth and sixth cousins.  If we had an actual test from my father, we might see them even closer.

My own test shows that my parents have a matching segment of 7.6 cM on chromosome 9.

I am waiting for results of two other sisters, so the relationship between my parents might be closer. Or as I suggested with Herb's parents, each segment might represent a different seventh cousin.

Just for fun, let's look at a few others:

Pinchas, my third cousin on the Kwoczka side, has a segment on chromosome 8 that's about seventh cousin.

Charlie's parents are also about seventh cousins, with 8 cM on chromosome 6.

Bonnnie's parents have two matching segments on chromosomes 2 and 8, which may show them to be seventh cousins twice but may indicate a somewhat closer relationship.

Miriam's parents have a large matching segment (18.1 cM) on chromosome 2.

There are more in the seventh cousin range, so for now, Herb has the honor, such as it is, of the most closely related parents, and Miriam for the largest single segment. But we have about twenty more new kits in process.

In fact, Esther and Dalia are not the ony ones who show no indication that their parents are related. Quite a few other do not either. But this is in each case one child who must receive the same segment from both parents. Perhaps it is more unusual that Herb has four large matching segments, that Aunt Betty and Uncle Bob have the same matching segment or that my sisters and I each have a different matching segment.

Email ThisBlogThis!Share to TwitterShare to FacebookShare to Pinterest
Labels: GEDmatch