After three consecutive weeks of blogging about Pikholz DNA, I planned to change the subject to something else - anything else.

Then I heard from Marla.

I had tweeted about having been accepted for the GRIPitt course in Practical Genetic Genealogy and Marla congratulated me on that. Having recently looked at the MtDNA matches for Pikholz descendant Amos (of the only Pikholz line that is all female) and seen Marla's name there, I decided to see whom she matched within our group.

Marla matches fifteen out of the twenty-six Pikholz who tested, but oddly enough Amos is not one of them.

The most interesting of those matches was with my father's cousin Herb, my father's sister Aunt Betty and me. Using Herb as the base, Marla matches all three of us on chromosomes 1, 16 and 22 (5.46 cM, 5.47 cM and 7.68 cM) and has another match with just Herb and Aunt Betty on chromosome 11 (5.78 cM). She did not match my second cousin Terry.

I reported this to Marla and she told me that her brother, her mother and her mother's brother also tested. Marla's brother also has fifteen matches - eleven of them are the same as Marla's and each has four that the other does not. So that's nineteen between them. Marla's mother has seventeen matches with us and the uncle has sixteen. All four have now joined our group.

Here is how Marla's group of four lines up with our three. Considering that we are defined as "remote" and cannot be closer than six generations, those seem to be very nice matches. 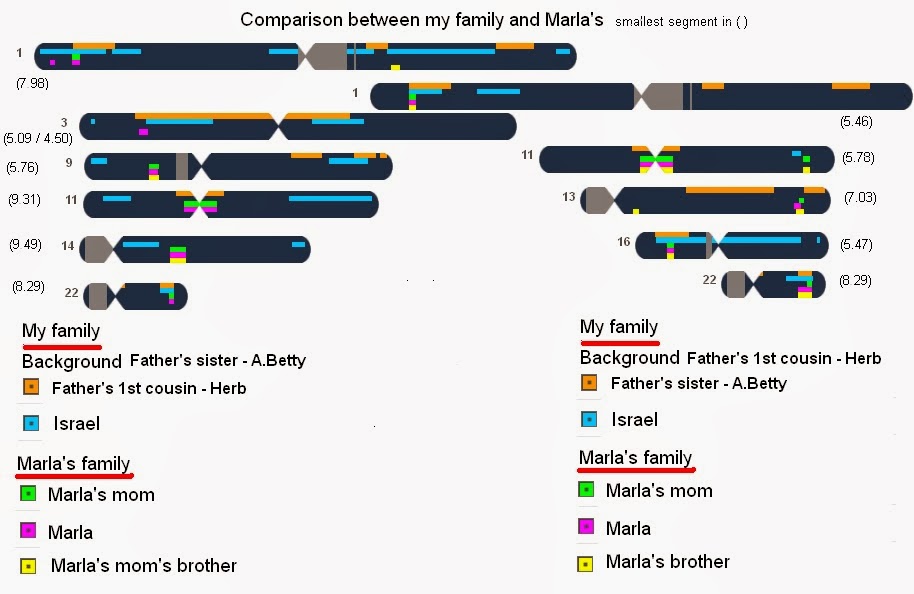 So I am guessing that Marla's family and mine have their Most Recent Common Ancestor (MRCA) six-seven generations ago. Her family surnames on her mother's side do not appear in our family.Those names would be Uszerowicz, Lewkowicz, Organek (previously Organkiewicz), Herszkowicz, Szlamowicz, Lichtman, Szapsiowicz, Baltman, Baran, Rubinow, Abramahow. (Note to self - clarify with Marla that all these "...wicz" names are documented surnames, not just patronymics.)

Lloyd has the same match on chromosome 11 with Marla's mother, but not with Aunt Betty. Dalia - who is Lloyd's third cousin on that same Pikholz side - does not.

Jacob also has the chromosome 11 match with Marla's mother, but not with Aunt Betty. The other three from Jacob's group do not.

I did not discern anything significant between Marla's group and the other Pikholz matches.

What characterizes all the Pikholz who match Marla's family on chromosome 11 is that they are Skalaters and that they all come from our matching Y-DNA group. Perhaps a Y-DNA test of Marla's uncle would help here, though a negative finding would not prove or disprove anything.

I do think that of all the non-Pikholz families who match a large number of Pikholz descendants, Marla's family is the one which appears a match within six-seven generations to a particular set of Pikholz families. So with that, I'd like to extend a tentative but hearty welcome to Marla and the other members of her mother's family. You really appear to be cousins, nearly in reach.

For next week, you'll be pleased to know that I already have another topic that has nothing to do with either Pikholz or DNA.

Housekeeping notes
The left hand that appears in the right-hand column under the "followers" means that I am now registered on the Geneabloggers website. The fellow who runs it is a well-known genealogist and lecturer.

The first of the four books I need to read in preparation for the GRIPitt course has arrived.