There were four Pikholz listed (actually, one Pikholz and three Picholz) and because it was a microfiche, I do not have a photograph, only my notes.

In 1923, Eliezer changed his surname to Haniel. He lived in Jaffa and listed no nationality. (You can see more about him here.)

In 1939, Chaim and Malka changed their surname to Etzyoni. This married couple lived in Tel Aviv and were of Palestinian nationality, as was typical of the Jews at the time.

In 1937, Hinde Renke Pikholz changed her given name to Shulamit. She lived in the Sheinkin neighborhood of Tel Aviv and was of Rumanian nationality.

In preparation for the IAJGS Conference in Jerusalem nine years ago, the Israel Genealogical Society (IGS) put this database online.

In today's version, the search button leads to something called Eretz Israel Records Indexing (EIRI), which is meant to search any number of databases on the IGS website.

So in order to reproduce the results for this post, I did a search. First in Latin letters. Using "Pikholz" or "Pickholz" as soundex produced no results at all Exactly "Picholz" did as well. Exactly "Pikholz" produced two name changes - Shulamit above and Ilan. But for neither was the original name listed.

Ilan is an odd story because his name was changed to Pikholz. It seems his mother entered the country using false papers which showed her as married to someone else, so Ilan's original surname was that of the fake "husband."

Starts with "Pik" gave me those two again, plus a few others from the 1922 census.

Is exacty "Pickholz" gave me two entries for someone I have never heard of.

These are reports of a pharmacist license (#571) for a woman in Tel Aviv. Her maiden name, Hilsenrath, is listed in the 1946 record and I haven't clue who she is. When I am next at the library, I'll check directories for those years and see who else lived at the two addresses.

Then I checked again using the Hebrew letters in the windows on the right. There is no "sounds like" function in the Hebrew search.

None of those Hebrew look-ups shows any of the name changes nor, for that matter, Betti the pharmacist. All I found there were two Haifa directory entries and four entries from the 1922 census.

So much for that.

After the establishment of the State 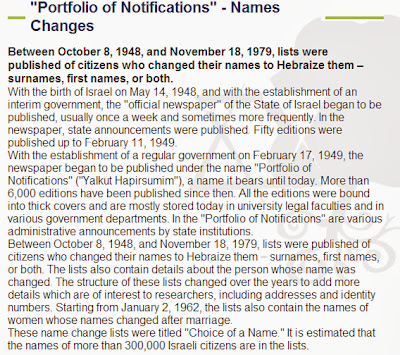 The IGS website also has name changes after the establishment of the state, until 1979.  You can see the details here on the right. Interesting is that from 1962, they say that records include women who changed their names as a result of marriage, but in fact I do not see any. My sisters, for instance..
So I had a look at Pikholz and found quite a few name changes of people I know. Some with addresses, some with ID numbers, some with both and some - towards the end - with neither. There was also a legal notice of a probate case.

There were, however, two people I had never heard of.
Elisheva Pickholz changed her name to Elisheva Reiter in 1950. Her address was Bet Simani, Romema, Jerusalem. I found listings for Elisheva Reiter in 1965 and 1970 Tel Aviv phone books and a 1992 tel Aviv burial, but I have not been able to get a handle on this, including from government sources. There is no ID number listed.

Housekeeping notes
1. Family Tree DNA just made some significant changes in the display of their Family Finder matches page. There has been discussion among the researchers and some are pleased because there are new things they can do or existing things which are now easier. Some researchers are simply frustrated that things are not as they were and don't want to spend time and effort getting used to something new.

Other researchers - and I am in this group - are unhappy because information that we used regularly is no longer available. It will take time and patience to figure out how to deal with this and I am in short supply of both.

The fact that there was no warning makes it worse.

2. On Wednesday, 9 October, I plan to go to Haifa to hear Dana Michaelovici speak on DNA analysis for the Israel Genealogical Society.
Posted by IsraelP at 7:30 AM