This week, I am posting Friday rather than early Sunday, because I want to get this up before Yom Kippur. On the other hand, I will likely have what to say afterwards, so please tune back again Sunday for my additional comments.

Last year, after the holidays, I was having a conversation with Dan, a younger fellow (maybe forty-two?) in my shul, about the holiday service. He often serves as hazzan for musaf on one of the two days of Rosh Hashanah and I generally read the Torah.

On Rosh Hashanah, we crown Hashem as King and I always liked that as a powerful service, fitting for a Divine Coronation. It has been awhile since I have participated in a service in that spirit, as the folks in our shul seem to prefer a soft and sweet service, arms waving in the air, etc etc.

And I said to Dan that one of my great regrets is that none of my sons has ever heard what I always considered the really great High Holiday service that I first heard forty-five years previous. Bits and pieces of that service.used to show up here and there and from time to time, but it was usually as a poor imitation - due both to the limits of the hazzan and the limits of the smaller congregations.

Dan asked me  what great service I was referring to and I told him that it was at the yeshiva in Kerem beYavne. I was not a student there, but the first year I was here, I was on a work-study program on neighboring Kevutzat Yavne. 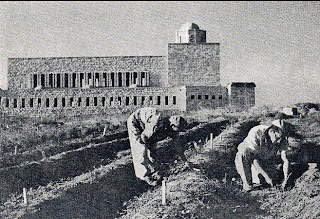 The afternoon of the first day of Rosh Hashanah, one of my friends in the yeshiva came over and told me that I really must come the next day, as the service there was remarkable. So I did.

And I went again for Yom Kippur and again the next year for both holidays.

The hazzan was only a few years older than I, but he had a remarkable set of melodies, designed for a large,  participating congregation, which came across as extremely powerful. The hazzan himself never repeated any words, but the rest of he yeshiva seemed well rehearsed and provided a wonderful background. There were parts when it felt like the roof would lift up.

And Dan said "Do you know who that hazzan is?" When I said I didn't he continued "That's Emanuel's father and he is still there every year." Emanuel is a thirty-ish fellow in our shul and I  asked him if his father is really the hazzan I had heard so many years before. I did a few of his
tunes and he shook his head in recognition. Yes, his father, who lives here in Jerusalem, goes 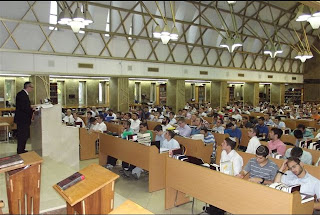 back to Kerem beYavne every year for the holidays and it's just like it always was.

"So is there a way I can go for Yom Kippur next year" I asked him, "with Devir?" Emanuel said this was probably easy enough to arrange - I mean it's not like we need to be fed or anything.  (My wife does not fast well and stays in bed the whole day, so she doesn't really care where we are. Not like Rosh Hashanah, which might be a problem if Devir and I were to go away.)

So it's set. Forty-six years later, we are going. It's less than an hour's drive and we haven't decided if we will eat here or there, but we are actually going ahead with it. They'll give us couple of beds in the dormitory, which will be fine, as long as both are not top bunks. (I have never done "top bunk" and do not care to start now.)

Check back here Sunday, as I plan to add a section about what actually happens.

In the meantime, I want to thank all my readers for looking in over the past year - even if no one comments. And please forgive me if anything in this blog warrants it. I have probably gotten a fact wrong here or there, misspelled a few names, misquoted or perhaps even given more serious offense. 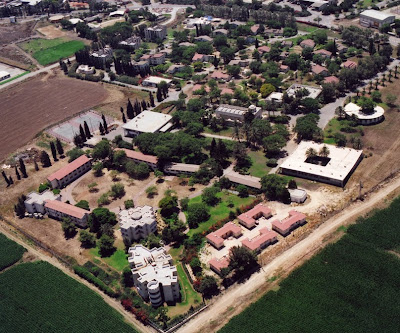 So, you ask, what actually happened?
Forty-five years later, the actual facility is pretty much what it was. The iron beds, which were old then, are still there, in the same rooms. Yes, the rooms have air conditioning, but you still have to go outside to get to the bathrooms.

We ate at home, but that was more than an hour earlier, so we had a bit more in the dining room. The kind of institutional setting that even the army no longer has.

To be sure, I say all this with the greatest respect, both for the institution which values simplicity and the largely overseas student body which finds it adequate.

In the evening we went from six-something until about ten-thirty, with a talk by the Rosh Yeshiva for the better part of an hour. We started at 6:45 in the morning and went until 2:45, then reconvened at 4:15 until probably a quarter to eight.

The service was, of course, not exactly as it was then. There are melodies that hadn't been written back then which were incorporated into the service – even a bit of Carlebach. And even in this old, traditional place, there were some melodies whose chief value was that people knew them from some other traditional use. But these were used just once, not over and over.

Speaking of "over and over," we were reminded that even though some prayers appear multiple times in the course of the day, there are some melodies which belong in certain places but not in others. So many places do too much homogenization for my taste.

It was a pleasure to hear certain things done right after so often hearing them done wrong.

The whole congregation, the several hundred voices, all know how it is supposed to be done and everyone unabashedly plays his part. That's where the power comes from.

The high points that I remembered were all there, pretty much as I have remembered them. I had a bit of a scare on "vechol maaminim," a long piece which is often done with a series of tunes. The one I specifically remembered only showed up at the very end, after Devir had decided that it wasn't going to come.

He has a really nice bit of "vechol maaminim" on the words "Hamamlich melachim velo hameluch" (He crowns kings but retains sovereignty) where he (with the whole congregation) quite suddenly switches briefly to the high part of Hatikvah, to make the point that our own government must remember at whose pleasure it serves.

Am I glad we went? Absolutely. Will I go again? I don't know. The itch has been scratched.
Posted by IsraelP at 10:00 AM