SEVENTY YEARS WITH NO JEWS. 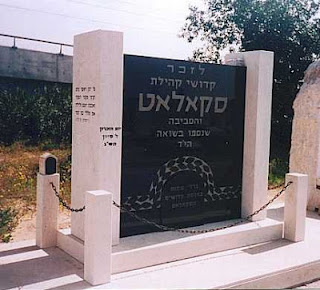 Last week was the annual memorial meeting of Skalat survivors and descendants at the cemetery in Holon. See last year's posts here and here.

This year is seventy years since the murder of the last Jews of Skalat.

Shammai's family was to go on to Shammai's grave in Rehovot, for his yahrzeit was the day before.

Yocheved's brother Motel Weissman was missing for the first time as age has begun catching up to him. His closing kaddish was taken up by the whole group.

There were people who had never been there before, not just from the third generation. Henie Winter was not able to accompany her mother Tonia, but her brother came instead. He told me he wasn't sure what the point of the meeting was, but by the time we left, I think he had begun to understand.

Zvika Sarid spoke about two pieces of news. Their family project to locate the body of their brother and uncle Herschel Weissman is proceeding and they hope to go to Siberia this summer - at least to find his grave and perhaps to bring him to Israel.

The other news is that the town of Skalat is planning a celebration in August of five hundred years since the founding of the town. The mayor has said that they would be pleased to have Jewish former residents and their descendants as "honored guests." Zvika said that they were considering scheduling their Siberia trip to allow them to allend the celebration. Bronia objected to the idea that Jews should want to take part in a celebration of this sort. Everyone acknowledged that both attitudes were legitmate and that anyone who chose to attend would not be representating anyone but themselves.

A cousin of Bronia - whose name I didn't catch, but who is a Birnboim from Grzmalow - told of her own family's experience in the first two aktiot. The family had been in hiding and escaped the first aktzia, but her baby sister cried too much and the family that was hiding them on the roof, turned out the mother and two younger sisters, so only she and the father survived the second aktzia.

As we dispersed, I had a personal word with Zvika and some of his family. They live on Kevutzat Yavne, where I spent a year after the Six Day War. At the time I knew nothing of my own family history. The name Skalat meant nothing to me, nor did Zalosce, wher my grandfather was born. I do remember that Yitzhak Sarid, Zvika's father, spoke to us about his Holocaust experience and surely mentioned both those towns at that time. And I lamented the missed opportunity. There were people alive at the time who could have answered so many of the genealogy questions that I have today.
Posted by IsraelP at 7:30 AM