First a word of prayer for our people in the south, for those who fight to protect them and for wisdom.for those making the decisions.

The first was Avraham's servant (traditionally identified as Eliezer) who was called Beruch Hashem by Lavan the Aramean in the Torah portion which we read the Shabbat before last.

The second was Yitzhak, who was called Beruch Hashem by the Philistine king Avimelech in the Torah portion which we read just this past week. 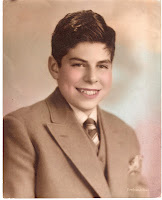 Eliezer Yitzhak is my father's name and his yahrzeit follows those two readings, falling on Monday this week - 5 Kislev. It has been thirty-two years; he was in his fifty-eighth year.

He was named for the younger brother of his maternal grandmother, Lajos Bauer, who was a high-level government official and almost certainly still alive at the time. It is quite possible that only the "Eliezer" came from Lajos Bauer, whose birth record has only the one name. If that is the case, the "Yitzhak" may be from Isak Fischel Pikholz, my father's great-grandfather. But I am speculating.

When my father was in his early forties, my parents began speaking of aliya, though they had never even spoken to us of wanting to visit Israel. Nothing came of it at the time and a few years later, at forty-six, he had his first heart attack.

Two years after that, they made the move, together with the five girls. (I was planning on coming a year later, but it ended up being two. My brother stayed in the US.) He got a good job with Motorola in Tel-Aviv, working in English, but he never felt he fit in among the Israelis. In particular he struggled with the language, especially at work, where his co-workers insisted on practicing their English when speaking to him.

After three years, they took the two younger girls and went back. My parents rented out their apartment and continued paying their Israeli medical insurance, figuring that after my father retired, they'd come back.


They lived in Skokie Illinois and my father went to work for Motorola, at their headquarters in Schaumberg, eventually becoming a liaison between Schaumberg and the Tel-Aviv office. So we would see him a few times a year, whenever he came to accompany someone from Motorola Israel on a visit to an African or Iranian customer. And there were a couple of additional heart attacks.

During his recuperation from one of them, he grew a beard.

One summer he was here, in order to go to Africa with someone from Motorola, but he spent the time in hospital in Petah-Tikva. I visited him there and took the opportunity to pin him down on the matter of cemeteries, a subject he had refused to discuss before.

He insisted on going back to Pittsburgh for Rosh Hashanah that year. He knew the end was coming. They were to be in Pittsburgh in November for my cousin Ellen's wedding and he decided to make a kiddush in our shul - no reason, just because. Then he died. My mother called to cancel the kiddush and to arrange for a memorial service there instead.

It was Wednesday night when my father died and the logistics were such that the burial in Petah-Tikva would not be until early afternoon Monday. There was a service in Pittsburgh on Sunday and those in the US sat shiva from then. We sat here after the funeral Monday.

My mother asked that my army friend Rabbi Chaim Tabasky do the funeral. He spoke of Yaakov Avinu who came and then left and was brought back by his children. Thirty days later, R' Simon Kantarof did the unveiling. There may be a tape recording of that someplace.

Nana visited Israel twice after that. On one of those two visits, she asked me to say kaddish for my grandfather, and eventually for her when the time came. My grandmother outlived my father by fifteen years.

She died 28 Heshvan - that was Tuesday of last week. It was her ninety-second birthday. They got up from shiva on my father's yahrzeit.
Posted by IsraelP at 7:30 AM