ARE THERE TWO MORDECAI KWOCZKA? - DNA PROVIDES AN ANSWER

My father's paternal grandmother, Jutte Lea Kwoczka, was born in Zalosce (east Galicia) about 1855 to Mordecai Meir Kwoczka and his wife Basie Pollak of nearby Jezierna. Basie died in 1889 and Mordecai Meir probably died during the period 1862-1876, for which there are no death records available.

Jutte Lea and her husband Hersch Pickholz named their first son Mordecai Mayer. That was 1877. He died a year later and the name Mordecai was reused for their second son.

Hersch and Jutte Lea went to the US in 1903-1904 and four of their children travelled with them. The other three children went a bit earlier, on their own. The whole family lived in Pittsburgh.

Jutte Lea had a brother who apparently never left Zalosce and two of his daughters settled in Pittsburgh. In the course of my research, I learned that the brother's name was Pinkas and that he named his first son Mayer - or perhaps Mordecai Mayer. This son died in his second year, about the same time as Jutte Lea's son.

One of Pinkas' two daughters in Pittsburgh also had a son Mordecai Meir, known as Max.

When limited Zalosce records became available on JRI-Poland, I made an inventory of the Kwoczkas. There was not enough information to put all of them into a tree, but it appeared that the initial couple was Josel (~1794-1849) and Jutte Leah (~1795-1855). Since we have just that one couple in that period and since my great-grandmother Jutte Leah was born the same year that the older Jutte Lea died, I have been assuming that my great-great-grandfather Mordecai Meir is a son of the older couple Josel and Jutte Leah. 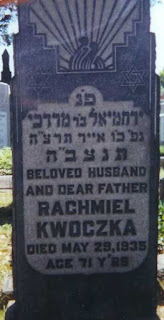 In the course of my inquiries and research, I found a Rachmiel Kwoczka of Zalosce, born about 1864. He and his wife Feige Franzos had seven children 1889-1907, some in Zalosce and some in New York. I met a few of their descendants, but none knew much about the family history. My natural assumption was that Rachmiel was another brother of my great-grandmother Jutte Lea.

When I did a round of New York cemetery visits with my son Eliezer, six years ago, I saw the grave of Rachmiel Kwoczka in Mt. Hebron Cemetery. His father's name appears as Mordecai, without the Meir.

That's a problem. It is certainly a possibility that a father's name on a gravestone is incomplete. Rachmiel's wife Feige predeceased him, but one would think that his children would know his father's full name - at least from hearing him called to the Torah. Maybe it was just a space problem on the stone, but I'd think that unusual.

So I decided to record Rachmiel as the brother of Jutte Lea (and Pinkas), with a very large asterisk.

Rachmiel's grandchildren would, therefore, be my father's second cousins. I have become quite close with the youngest of those (who lives in New Jersey) and I freely refer to him as my father's probably second cousin, though he is a few years younger than I. (I'll call him "B" here.)

More recently, I asked B if he would test, as well. I thought that might resolve the question of the two Mordecais and also hoped it might show us some additional Kwoczka or Pollak connections. It took me awhile to put this proposal to him in a convincing manner, but he did the tests and we now have preliminary results.

So now we know. There is one Mordecai and his name is Mordecai Meir - no asterisk needed. Rachmiel's stone is incomplete. B is indeed my second cousin once removed. (I really have to introduce him to Pinkas' descendants in Pittsburgh and Baltimore.) And I can point to a DNA victory. 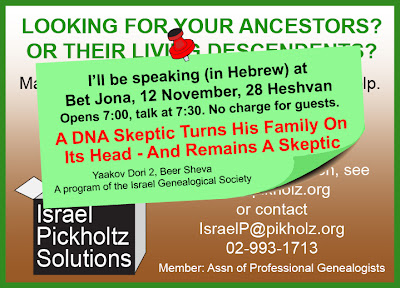