BE VERY CAREFUL WITH INDEXED RECORDS

Probably a dozen years ago, the Belarus Special Interest Group (SIG) indexed the 1874 revision lists for Borisov, the place where my mother's mother was born. (Revision lists are similar to census records.) I looked up the Rosenblooms and was pleased to find a reference for Srul Rozenblum, age 22, son of Jankel (=Jakob), living with his widowed mother Shayna Liba. Srul was listed as head of the household.

There was no question in my mind that this was my great-grandfather (and namesake) Israel David Rosenbloom, whom we knew was born somewhere around 1850 and whose first child was born about 1880. I didn't know his parents' names, but his first grandson was Jakob and his youngest daughter was Shayna Liba, so it all made sense.

For some reason I never made a screenshot of the search results, nor did I ever get around to ordering the record, but I did record the information, including both parents' names.

The Belarus database also had a list of names from Borisov, which included both Srul Rozenblum born 1852 and Jakob Rozenblum born 1827. I inquired about the source for this information, particularly Jakob's age, and was told that it was all based on the 1874 revision list.


Well, I could see how they got to 1852 for Srul - he was twenty-two in 1874, so 1851-2 would be right. And Srul's patronymic Yankelovitch would mean his father was Jakob, even if it didn't say outright. But Jakob was dead in 1874 (his wife was listed as "widow"), so there was no age for him, nor did I see anything in the revision list index.

I inquired about Jakob's age and it was explained to me that since there is a  basic assumption of Jewish genealogy that men had their first child at twenty-five and women at twenty-two, if Srul (Jakob's only known son) was born in 1852, then Jakob would have been born in 1827.

That made no sense to me whatever. The 25/22 indicator is a fine rule of thumb, but it is certainly not dispositive. Perhaps Srul was not his first child. Perhaps he was twenty-one or thirty-one when Srul was born. And in any case, it seemed wrong to me that the database should list "1827" without some indication that this was based on a rule of thumb calculation rather than an actual document.

But they told me that this was the way they had decided to present the data. I preferred not to list a birth year for Jakob in my own database.


A few months ago, I did that same search again and the revision list came up differently. 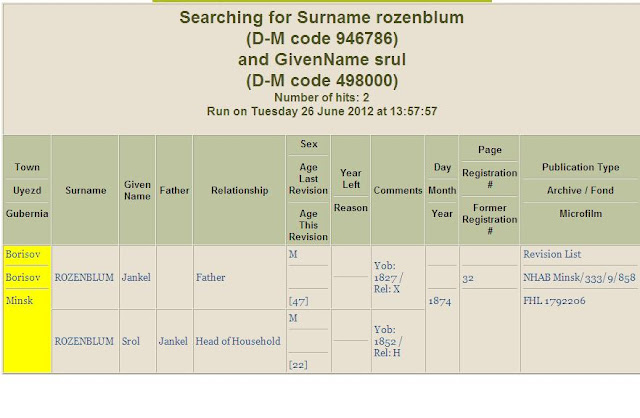 Here we see Srul listed as head of the household, as before, but instead of his widowed mother Shayna Liba, we see his father Jankel, whom we thought was already dead! I could not imagine where I had gotten the earlier version, if not here, but this new version seemed pretty unambiguous.

So I ordered the record from Salt Lake City, which I should have done years ago. And here it is, with the empty parts trimmed off. 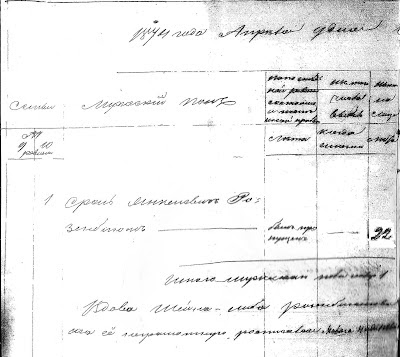 A Russian-born fellow in my shul had a look and told me that it shows Srul Yankelovitch Rozenbloom, age twenty-two and his widowed mother Shayna Liba. This is of course what I had seen a dozen years ago and not what appears currently in the database.

LET ME CLARIFY
This is not meant to be a criticism of the Belarus SIG database, though I question the listing of birth years without any kind of documentation. Every database has errors and their current database coordinator is investigating the specific issues, particularly the matter of Jakob's purported birth year.

My point here is to show readers that errors exist and that we should get the originals where possible and take sensible precautions. Remember, if you are the family genealogist, once you write it down, everyone will accept it as fact.

WHILE I AM DISCUSSING THE ROSENBLOOMS...
Srul had a daughter "Mary" from his second marriage who was a physician in Moscow. (This would be my grandmother's half-sister.) Our last news of her was in about 1930, when she gave her brother Hymen her address - in a letter that cited her last name, Goldin.

I recently inquired of a Russian researcher about finding more about her. I heard from him about two weeks ago and he confirmed finding a listing that appears to be her. He quoted more for the full research than I am willing to pay at this time, so we'll see if we get back to it later. There may be living descendants.