THE GRANDPARENTS OF HERSCH PICKHOLTZ

(Part one of three) 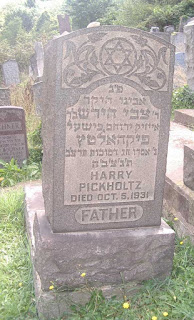 Isak Fischel
My father's grandparents are all buried in Pittsburgh. I first visited them properly forty years ago and have been there maybe five times since. That first visit was the first time I learned that the father of my great-grandfather Hersch (Harry in the US) Pickholtz was called Isak Yeroham Fischel. That's what it says on his grave. Hersch's sister Leah Braun is also buried in Pittsburgh and his name appears there the same way. The other sister, Bessie Franzos (aka Frankel and Francis) has him as Yitzhak Fischel.

Fischel is the Yiddish equivalent of two different Biblical names - Efraim and Yeroham - so including "Yeroham" on some of the graves provides us with clarification, although he probably rarely used it. He appears in documents as Isak Fischel, occasionally Fischel Isak.

My grandmother told me that his wife's name was Rivka Feige, though I learned later that it sometimes it appears reversed in old documents.


In addition to Leah, Bassie and Hersch, there was a brother Yehiel who never left Europe. I first learned of him from my father, who died back when any genealogy work I was doing could best be described as "puttering." My father himself knew very little of the family history, but he gave me two pieces of information which I have never heard from any one else. My father wrote me a note that his grandfather Harry Pickholtz had a brother Yehiel with three children and had an uncle Selig Pickholtz. I can only speculate why my father would have known that his grandfather had an uncle Selig. That speculation is for another time, but the information is relevant here. 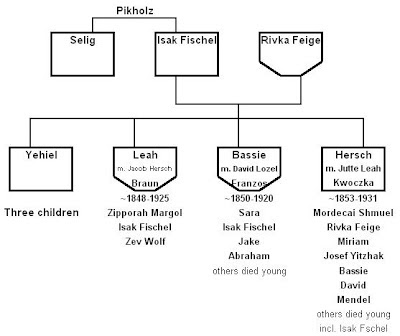 As I got further into my research and records became available through JRI-Poland, I was able to put together the basic structure of the family of Isak Fischel and Rivka Feige. (See to the left.) The approximate birth years of their children are based on their death records. (I also began using the Galician spelling "Pikholz" more frequently.)

I put Yehiel as the eldest because I learned later that two of his children were born in 1874 and 1876. He may, in fact, be younger than the sisters.

Josef and Rojse and Motie and Taube
The Jews of Galicia did not always record their marriages with the civil authorities, but occasionally a registration will show up many years after the actual Jewish marriage date. One such record is the 1887 marriage in Skalat of Berl, age 71, son of Josef and Rojse Pikholz and Dwojre, age 50, daughter of Motie (=Mordecai) and Taube Pikholz.

This couple had ten children and there are a few living descendants.

I got the idea into my head that this was a close-cousin marriage or perhaps an uncle-niece, but although I made notes to that effect, I did not record a relationship between them since I had no evidence.

If Josef was in fact twenty-one years older than Motie, they could have been father and son, or brothers or uncle and nephew, who knows. Perhaps they were not closely related at all - just two Pikholz from Skalat whose children (also twenty-one years apart) married one another.

Motie had two other daughters and some sons, but I found no other children for Josef. Among Berl's descendants there were some Isak Josefs, whom everyone called Josef, as well as younger ones who were called Josef without the Isak.

It was then that I found the only Selig Pikholz in my database. (Remember, my great-grandfather's uncle?) Selig had a son Itzik Joseph, born in 1862, several months after the death of Isak Josef. This indicated to me that Selig was very likely a son or grandson of Isak Josef. I later found that Selig had an older son Markus (= Mordecai, almost certainly) and the same as Selig's father-in-law. That precluded the possibility that Selig was a son of Motie, who was still alive when Markus was born.

My grandfather had an older brother Yosef Yitzhak, but when we found his birth record, it turned out that he too was originally Isak Josef. So Uncle Joe fit the pattern of those named after Isak Josef, that they were named Isak Josef, but called Josef.

So that sets up Isak Josef as the father or grandfather of the brothers Selig and Isak Fischel. But wait. There is no way that ISAK Fischel has a living father or grandfather named ISAK Josef. That seemed to leave the possibility that our Pikholz name did not come from Isak Fischel, but from Rivke Feige and she was the sister of Selig. (I have written before about the fact that many Jewish couples did not register their marriages with the civil authorities, so the children received the mother's surname.)

That sets up this structure: 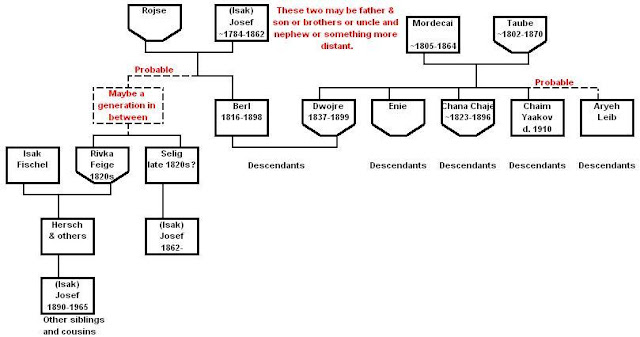 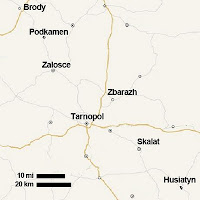 Everyone in this structure was born in Skalat, except the children of Isak Fischel and Rivka Feige, who were born in Podkamen, quite a ways away. Why, who knows, but my best guess is that Isak Fischel comes from Podkamen or somewhere nearby. Of course, he is not Pikholz, so he could have come from anywhere. Of their four children, three married into families from nearby Zalosce and lived there. Rivka Feige sent her daughter Bassie back to Skalat and she married someone from there. Bassie's children were born in Skalat.

And what was the surname of Isak Fischel? The surname that should have been ours? Who knows. My very first blog post in this series discusses this at length. I have even ordered every record I could find in east Galicia for people named Isak Fischel, hoping one would lead me someplace.

I may never know the answer to this question, just as I will probably never be able to pin down the relationship between Isak Josef and Mordecai. I am largely resigned to this, but I plod on.

The thing is, although my grandfather died when I was nine, I knew his three older brothers, who died when I was seventeen and twenty-one so I surely could have asked them about their grandfather. The middle sister Miriam (Aunt Mary Braun) lived another nine years and we had some correspondence, so the answer to that particular question was almost certainly available.

I did one thing, however. About sixteen months ago, I ordered a Y-chromosome test, hoping to find someone else with the same father-to-son DNA. You can never tell with these things. Maybe I can identify Isak Fischel's family after all.

To be continued﻿
Posted by IsraelP at 7:30 AM