THE 17th DAY OF THE OMER - תפארת שבתפארת

Computers in the Corporate Office

﻿I had been working there for about a dozen years, this large, well-known (in Israeli terms) industrial corporation with maybe fifteen hundred employees. This was sixteen years ago and the Internet was just beginning to be used in companies such as ours. That's "such as," not ours itself. The head of the computer department had said in no uncertain terms that no one in the company needed Internet and no one would have it.

He had been terribly wrong before, as when he insisted in 1984-85 that no one would ever need a PC and that the two of us who shared one would soon be shown the folly of our ways.

But I did the budget and cost accounting of the mining division for several years on Visicalc and Lotus 1-2-3 1A, while the processing plant economists kept working with pencil and paper, waiting for the expensive new central system to kick in. (It never did.)

I had learned a bit about email and the world wide web when I was in the US for my first-born son Yerachmiel's wedding a few months earlier and I was really interested in bringing those tools into my office. Such confidence that I had was really what you would call today "faith-based."

For some reason, someone overruled the computer guy, and I was told that I would be given my own Internet connection. Perhaps that spreadsheet work had given me some credibility with someone.

Counting the Omer - No Computers Needed

So we count the Omer for forty-nine days, counting each day and each week, from the second night of Pesach ending the night before Shavuot.

Kabbalah assigns one of seven Divine qualities to each of the seven days of the week and then to each of the seven weeks. First is חסד (hessed) kindness, then גבורה (gevurah) strength or fortitude, followed by תפארת (tif'eret) glory or beauty, נצח (netzach) eternity, הוד (hod) majesty, יסוד (yesod) foundation and finally  מלכות (malchut) kingdom. So the first week is hessed and the days of that week are hessed in hessed, gevurah in hessed, tif'eret in hessed etc. That pattern follows throughout the seven weeks and in saying this much, I have reached the outer limits of my understanding of the subject.

Yerachmiel was born around noon Friday, the second day of Iyyar, thirty-nine years ago, in Chicago. My parents had made aliyah two years earlier and it was already Shabbat for them, so I could not call them with the news. Most of my other close family lived in Pittsburgh, but they were all on the way to Silver Spring Maryland for my cousin Marshal's bar mitzvah. So aside from my then-wife's Chicago family, the only call I could make that day was to Marshal's parents, who reported the news of the first grandson and first great-grandson to the Pittsburghers, including my grandmother. 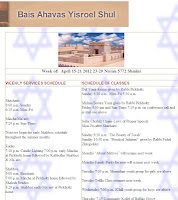 Today, he and his wonderful wife of sixteen+ years, live in suburban Chicago with their sons. He has been ordained in traditional Jewish jurisprudence ("yadin yadin") which he continues to study and serves as the rabbi of a small, but vibrant shul.

But that is now and I was telling you about sixteen years ago.

So.  Where Is This Leading?

A few days after Pesach sixteen years ago, I was told that the company had ordered me an Internet line, from a soon-to-be-defunct provider called shani.net. It was to be up and running the following Sunday. So Sunday morning, the day after Rosh Hodesh, I made my way to work as usual - driving to Beer Sheva, going to the 5:40 minyan, then getting the company bus for the half-hour ride to our offices. I would sleep during that ride, usually drifting off before we even left the city. 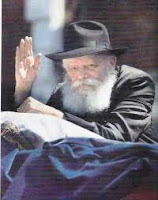 But that morning, I stayed awake another two or three minutes, enough to see the large billboad near the exit to the city. Some forgettable inspirational message with one of the iconic, ubiquitous pictures of the Lubavitcher Rebbe, who had died going on three years earlier.

And down at the bottom, it said http://www.chabad.org/.

And I figured that was as good a way as any to test out my new Internet connection. When I went into the site, I saw that they were offering a daily email called something like "Thought For The Day." I signed up.

They sent me their thought for that day - 2 Iyyar, the seventeenth day of the Omer. I no longer have what they sent, but it made an impression, so I will bring the story from another Habad publication.


When he was seven years old he was once tested in his studies by his father, the Tzemach Tzedek. My grandfather did so well in the test that his teacher was enormously impressed. Unable to restrain himself he said to the Tzemach Tzedek, "Well, what do you say? Hasn't he done marvelously?" The Tzemach Tzedek responded: "What is there to be surprised about when tiferet-within-tiferet does well?"

The Rebbe Maharash, properly known as Rabbi Shemuel, was the fourth leader of Chabad.

"Tiferet within tiferet." My son's birthday.

It was clear that this Internet thing and I were going to be good friends.
Posted by IsraelP at 8:00 PM