I have found that the Hevrot Kadisha (burial societies) here in Israel are among the most cooperative institutions with which I have dealt. Many have put information on line and all of them are very helpful with telephone inquiries. The website for the one serving Greater Tel-Aviv, for instance, not only tells you where to find the graves in its six cemeteries, but also tells you who is buried on each side of the grave in question. The one in Petah Tiqva has a computerized station at the entrance to the cemetery, which will give you a printout of the grave location with directions.

Jerusalem, however, poses special problems, particularly the ancient cemetery on the Mt. of Olives. The terrain is difficult, rows and sections are not well-marked and most importantly the Jordanians destroyed many of the tombstones during their nineteen-year occupation of the city. And many of the pre-State graves have no surnames. The Hevrot Kadisha - and I can speak only of the three Ashkenazic societies - do the best they can. Their maps are computerized. They will give you step-by-step directions over the phone in the manner of "go six rows to the east then ten paces towards the electric pole." They will also arrange for one of their guides/security people to meet you and show you to the grave. Which may or may not have a tombstone. Which may or may not be in its original place.﻿ ﻿

﻿﻿﻿﻿﻿The story I am about to tell illustrates a particular sort of problem that doesn't come up in most grave searches. But it is typical in the sense that everyone involved gave his best effort to solve a problem.

CHAPTER ONE - The Background
Michele is an American who was working in Tel-Aviv for several years. She contacted me back a few months after I first began accepting clients, about three and a years ago, to see if I could locate her great-grandfather's grave on the Mt. of Olives. Yedidyah Choper had been born in Volkovysk Poland (now Belarus), and had gone to New York before 1900. He came here to live his final years sometime after his third wife Alte died in 1923. Michele wasn't sure when he had died beyond "between 1945 and 1947."

Yedidyah had five sons. Three went to the US early on, one was killed in the Holocaust and one survived and went to the US afterwards. No one is quite sure which of the sons is from which of his first two wives.


He was a pilot in the Army Air Corps - had taken some generals to Cairo for a meeting in '44 (I think) and got leave to visit his Zayde in Palestine.

With a few phone calls, I determined that Yedidyah was buried in a section that was nominally under the jurisdiction of the Hassidim Burial Society, in row thirty-two, grave 11 in one of several sub-sections that belong to an organization called Agudat Achim that brings Americans for burial here in Jerusalem, occasionally burying Americans who lived here. Hassidim told us that he had died on 27 Adar 5705, sixty-seven years ago this week.
﻿﻿﻿

A few weeks later, I met Michele and we went up to the grave site, together with my eleven-year-old son Devir.
﻿
﻿The area was in poor condition - better than some sections, worse than others - and many of the stones were either illegible or missing altogether. Some graves had been rebuilt by relatives, after 1967. After we looked around unsuccessfully ourselves, Hassidim gave us phone directions and we located the spot of the unmarked grave. You can see from the photograph that the upper (horizontal) stone with the epitaph is missing and only the base remains. Michele took some pictures and on the way back to town we discussed what might be involved in having a new stone put in place. She decided to leave that for the time being.

CHAPTER TWO - The Challenge
About a year later, I heard from Michele again. She wanted to put up a stone on Yedidyah's grave. That would include designing the epitaph, since we had no idea what had been written on the original stone.

We started off discussing what kind of stone, what kind of lettering, how high to build it, the wording and of course her budget. I don't get involved in this kind of thing often, but I had had some contacts with local tombstone makers so I knew where to get quotes. In the meantime, I rechecked all the details with Hassidim and things got complicated.

I was at the cemetery yesterday to confirm the location of the grave, so that I could give specific directions to the stonemaker.

It turns out it is not as simple as we had thought.

According to your photo, your ggf's grave is in the row that starts with Chaim Shelomo Goloventzitz, and is adjacent to the grave of Chaim Alexander Ziskind.

I called the Burial Society and spoke with Natan, who is my usual connection there and who was not available the day we went together. Natan has your ggf's grave in the next row to the west, that begins with Yehoshua Zelik Tarshish. This row sort of splits into two due to the topography and Nathan says that your ggf is in the "half row" that leads from the Tarshish row.


When I tried to get more specific, intending to record the individual names in that half-row, he made a reference to the graves of Meir Philips and Gershon Gottesman as being eight graves apart. In fact, those two gravestones are side by side. So it is clear that either Natan's records are not correct or the new Gottesman stone was put in the wrong place.

Now this whole section is subcontracted to a burial society called Agudat Achim and Natan suggested that they would have more precise information. So I called the man there, presented the problem and he said that he would have a close look at this in the days after Yom Kippur. I shall, therefore, get back to him next Thursday.

I went back and forth with the man from Agudat Achim and soon it was March. Michele had family coming at the end of April after which she herself would be returning to the US, so we needed to be done by then.


I got both burial societies' versions of the rows in question and compared them with the actual graves on the ground. Some graves matched, some did not. In some instances, recent tombstones didn't match the names on the graves. I had long since "turned off the meter." This had become more a matter of principle than of simply doing a job for a client.

I spoke with the fellow from the burial society a few days ago. He says they have done everything they can using both maps and tools at the site.

He is fairly sure which is the grave site, but is not 100% positive, therefore he cannot permit the erection of a new monument

He is planning to put a plain slab on the spot and will show us where. This is not a satisfactory answer as far as I am concerned, but I am not sure what we can do about it. I will speak with some outside rabbis on the subject.

We settled on the inscription, on the types of stone, the height and the molten-lead lettering. I sent the stonemaker a Word file and he faxed me back the final design as it appeared on his computer. 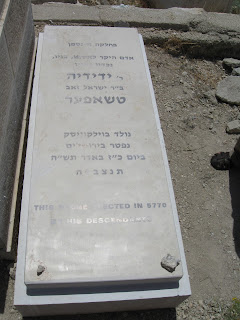 The full inscription was to read:

In this section lies buried

May his soul be bound in life.

This stone erected in 5770 by his descendants.

In Israeli terms, everything went well from that point. It was not completed - only partly because of changes in the stone that Michele wanted - until the very last minute, but that is considered normal around here. I hope that Yedidyah Choper would find this to his satisfaction. May his memory be for a blessing. 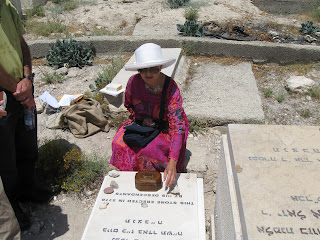