Named After A Living Grandfather?

Josef Pikholz was the estate manager in Klimkowce, a town a dozen miles from Skalat and 15 miles from Zbarazh. We know he was alive in 1910. We have no birth record for him, but we have a birth record for a son Wolf in 1874 so we assumed Josef was born around 1850.

Josef's daughter Roza, who was married to Markus/Mordecai Linden, had a son named Josef on 27 August 1911. We know that Jews in Galicia did not name after the living, so we assumed that Josef Pikholz had died by the time his grandson was born.

Most of the Klimkowce records are to be found in the Zbarazh collection, even though Skalat is a bit closer, but we did not see a death record for Josef in either place.

When we received new Skalat records four months ago as an Excel file, I saw thist.

I wrote at the time, in this space:


I was surprised to find a 1918 death for sixty-five year old Josef Pikholz in the village of Klimkowce. We had seen earlier that a grandson was named Josef in 1911, but we had not seen a death record for Josef. (We knew he was still alive in 1910.) So now it seems the grandson was given the name of his living grandfather - either after him or for someone else. Not totally unheard of, but unusual nonetheless.

Josef Pickholz, age 65, died in Klimkowce in 1918. Some seven years after his grandson Josef Linden was born. The age was about right and we had no other Pikholz family in Klimkowce. Jacob Laor was certain this was indeed his great-grandfather. How could he be anyone else?

My readers know I am hesitant to jump to comclusions, even though this seemed pretty straight-forward. I was concerned about the grandson who was named Josef in 1911. But it's Jacob's personal family and he is a senior member of our project team, so the best I could do was stall until we could see the record itself.

The record itself - showing the death in Klimkowce on 20 December 1918 and burial in Skalat the next day - was clear.

In the meantime, Jacob came up with another birth record for Markus and Roza - a son Benjamin, born in 1915. The sandak, the witness to his naming, was Josef Pickholz. Well that settles that. Grandson or no, Josef was alive in 1915.

But, nonetheless, I wanted an explanation. Perhaps they didn't hold to the tradition. My grandmother and her older brother were named for their paternal grandparents while they were still living - a fact she surely knew but never mentioned to me. I had come to the conclusion that this was my Slovakian great-grandfather showing that he was not superstitious like the Galizainers.

Or perhaps young Josef Linden was named after someone in his Linden family, perhaps his paternal grandfather. I knew a few cases like that. My father's first cousin Herb was given the same name as his grandfather Hersch Pickholz, who was alive for Herb's first twelve years. He was named, not for his grandfather, but for Hirsch Wachs, who is on Herb's father's side.

In another case I know, a woman whose parents are Chaim and Chaya named her third and final son Chaim while her father was living. It seems that her husband also had parents Chaim and Chaya. His father had died and since he is an only child, it was their only chance to name for his father. They asked her father's permission, which he granted.

That wouldn't work for the Lindens because the marriage record for Markus and Roza shows Markus' father to be Isak. Not Josef.

Not being in the mood to give up, I had a look at the records for the Lindens in Zbarazh. 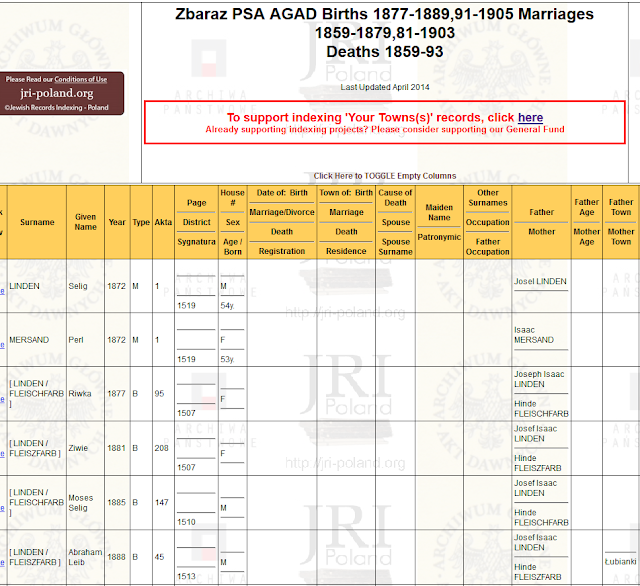 And here we see Riwka, Ziwie, Moses Selig and Abraham Leib, children of Josef Isaac Linden and Hinde Fleischfarb all born in the same decade as Markus. Markus' birth is not here, but I am ready to consider that his marriage record had only one of his father's names and that he was in fact Josef Isaac.

And I looked at one more document. Markus' son Leon/Aryeh submitted a Page of Testimony for his father to Yad Vashem. 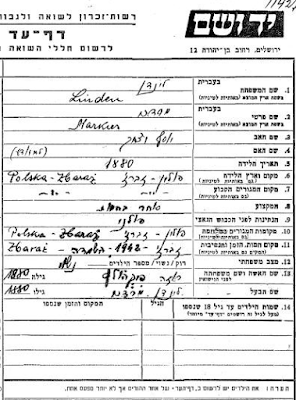