Reviewing Endogamy - What Does it Mean? 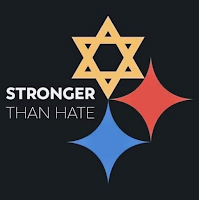 Yet, evenso, somehow we always come back to the yellow Star of David.

(When my parents brought me home from the hospital, we lived half a block down Shady Avenue. Later, from when I entered second grade, we lived fifteen years about two minutes walk away from the Tree of Life.) 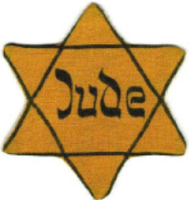 A few days ago, someone asked me what I thought of this match, which comes from the GEDmatch on-to-one search. 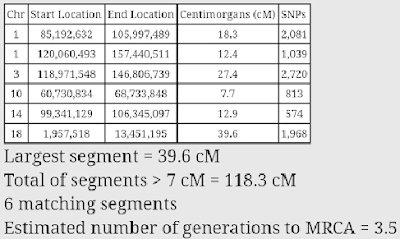 ...and says "This looks like Cluster #6 and the match is probably a half second cousin or a second cousin once removed." I have heard lecturers and read bloggers who say exactly that.

And I sit in the audience or at my desk and laugh at the simplicity of DNA in the non-Jewish world. This kind of thing is meaningless to Jews and Jews who use the Shared cM Project in this way, miss the point of the match.

If the first three segments all come from one ancestor and the last three all come from another, Shared cM would say the two testers are third cousins twice removed (or 2C2R, etc) as in Cluster #7.

But, of course, the six matching segments could come from four or five or six different ancestors, none as close as third cousins and most much further.

Matching Ed
Case in point, fresh in my memory. A couple of weeks ago, I received an inquiry from a woman named Michelle whose father matches my cousin Ed on four segments. She was asking me for information about his family.

GEDmatch said that they have 84.3 cM in common and that the estimated number of generations to the Most Recent Common Ancestor is 3.7. But that includes segments as small as 5 cM. Using segments over 7 cM produces only 58.9 cM and an estimated MRCA at 4.0 generations.

Ed's mother has tested and Michelle didn't mention matches with her, so it appeared that at least some of this match would have to be from Ed's father - who has no interest in any of this genealogy stuff.

It turns out that Michelle's father matches Ed's mother on only one of those four segments - the one on chromosome 9 - but she also has a nice segment of 15.3 cM on chromosome 1 with Ed's mother.

So about sixty-eight percent of Michelle's father with Ed is through his father. And since we have no testing for Ed's father's family, we cannot know how many ancestors are represented by the three segments with an (unimpressive!) total of 41 cM.

When I looked more deeply into the segments that Michelle's father has with Ed's mother on chromosomes 1 and 9, I see that both segments show multiple matches with descendants of my great-grandparents.

So both these segments came from one or the other of the parents of my great-grandmother Jute Leah Kwoczka of Zalosce. Are they from the same Kwoczka/Pollak ancestor? Who knows!

(The segment on chromosome 15 has several cousins, including one with >12 cM - but there are no descendants of the Kwoczka brothers, so this may be a Pikholz segment. Or it may be Kwoczka.)

In short, what appears to the non-endogamous eye to have been a third cousin match between Michelle's father and Ed is no such thing. It is composed of multiple common ancestors, more distant than four generations, one both his father's and mother's sides.

This is endogamy and this is its challenge.

While we are remembering
This evening, 20 Heshvan, is the twenty-sixth yahrzeit for my mother's sister, Aunt Sadie Gordon. This was her letter home, published in Pittsburgh's Jewish Criterion in 1943. 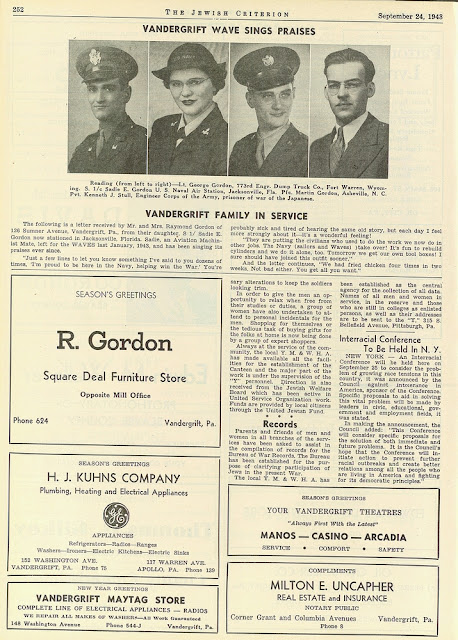