MyHeritage and George
Every Sunday, I receive a notice of up to ten matches from MyHeritage. I write to the matches and ask them if they have GEDmatch numbers, so I can do a proper comparison with my whole family set. Last Sunday, one of my matches was with George.

His daughter Lauren responded and gave me the GEDmatch numbers for her father and herself. I went to GEDmatch to see the match and to see who else in my family George matches - which parent, which grandparent, etc. I started with a one-to-one - just George and me.

Nothing at all over 7 cM. Certainly no longest segment of 21.2 cM.

This itself was no surprise. There are a few like this from MyHeritage every week. False match alerts.

Nonetheless I compared him to the rest of my family kits, using the one-to-many function. There were thirty-seven matches across my related families. But not my brother or my sisters. He matches my father's sister and her son but not my father's brother. Or any of my other first cousins. No second cousins on my father's side and four on my mother's side. And he matches a few more distant Pikholz descendants, both from Skalat and from Rozdol..

I ran the "new" one-to-one on Tier1 using the 5000-match threshold and it gave me the same thirty-seven matches.

GEDmatch and Lauren
While I was looking, I compared Lauren to my family kits on a GEDmatch one-to many. She has thirty-five matches with my group, including eleven matches that George does not have. Those eleven are three Pikholz descendants from Rozdol who are not particularly close to one another, my brother, my sisters Judith and Amy, Judith's son and her late twin's son and three other Skalat Pikholz descendants whose connection to me is unclear. 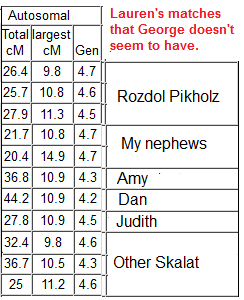 The >10 cM matches with my brother, sisters and one nephew are all on one segment, on the right side of chromosome 6. (My father's sister is on that same segment.) The others are all scattered. But the numbers for the group of eleven are not insignificant.

I figured that Lauren must have gotten those from her mother, so I looked at her mother's GEDmatch. There was one small, obscure match with someone who has nothng much to do with any of us. Lauren matches both of her own parents as expected, so where did she get these eleven matches?

One-to-one with George
I learned some time ago that occasionally a match with a single segment will not show up on the GEDmatch one-to many but will show up on the one-to-one.

So I looked at George's one-to-one matches with each of the eleven. 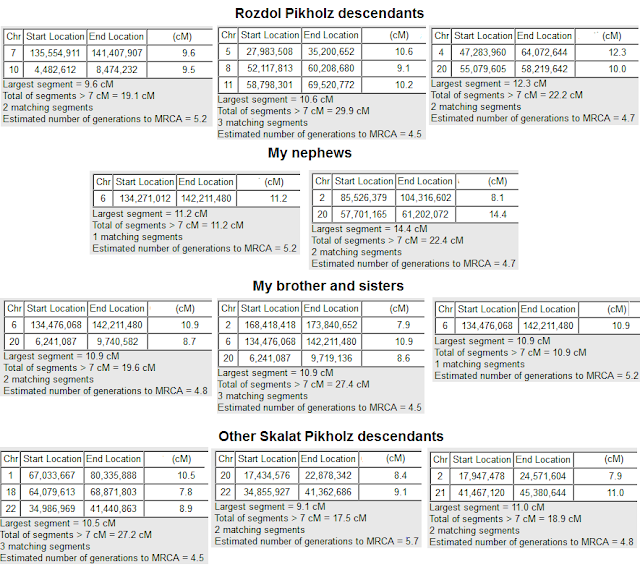 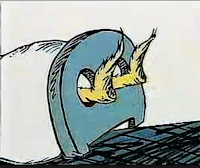 George - who has as expected, the same four matches on chromosome 6 as does Lauren - matches all eleven of Lauren's matches, even though GEDmatch does not show them on George's one-to-many.

On one level, it is a question that I would like GEDmatch to address. Quickly.

BEYOND A REASONABLE DOUBT
What We Know vs. What We Can Prove
Posted by IsraelP at 3:01 PM