For several years, we have seen the identical Y-DNA results for the three Pikholz descendants from Skalat. First at 37 markers and later at 67 markers. The three count back to known ancestors who were born around 1800. 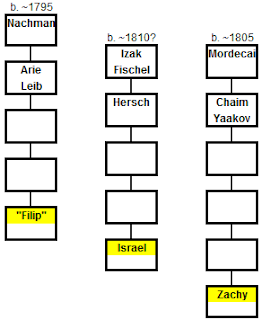 Zachy, who lives here in Israel and whom I have never actually met, counts back to his third great-grandfather Mordecai Pikholz. Mordecai's 1864 Skalat death record says he was fifty-nine years old, so I list him as having been born about 1805. "Filip" (not his real name) lives in Poland and counts back to his second great-grandfather Nachman Pikholz, whose 1865 Skalat death record says he was seventy years old.

My own second great-grandfather is Izak Fischel Pikholz and we are guessing he was born about 1810. Autosomal DNA and the relationships within the families have brought me to the tentative conclusion that Mordecai and Izak Fischel are brothers. These same considerations tell me that Nachman is not a brother - rather an uncle or perhaps a cousin.

At the same time, we saw that we also had a perfect match with two Spiras and a genetic distance of one with a Spiro. In the case of the Spiro and one of the Spiras, this was based on Y-67 tests. The second Spira, whom I refer to as "the Z-man," has only done a Y-37. That brought me to the clear conclusion that we were Spira before we were Pikholz. And probably not that long ago.

FTDNA said with 99.4% certainty that our most recent common ancestor (MRCA) was within the last nine generations. For reasons that are not clear to me, that 99.4% is the prediction both for the Spira with a perfect match and for the Spiro with a mutation built-in.

So I upgraded the other two Pikholz kits to Y-111, first Filip and then Zachy. Filip and I remained identical, so clearly the mutations happened before our common Pikholz ancestor. That gave me the clear feeling that our split from the Spira/Spiro family was several generations earlier than I had thought.

Now we have Zachy's Y-111 and he has a mutation, compared to Filip and me. This is clearly in the generations between Mordecai and Zachy because I do not have it. The mutation is at the marker called "DYS712" where Filip and I have a value of 21 while Zachy has 20.

The FTDNA probability chart shows a change in the expected MRCA due to Zachy's mutation, but of course we know for fact that this is not relevant.

I also ran the probability chart to compare my results (and Filip's) to each of Spira, Spiro and the Z-man. I used the same nine generations that I had assumed back in the days of the Y-67 results. 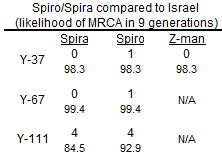 At 37 markers, all three show a 98.3% probability of a MRCA with us at nine generations, despite the fact that Spiro has a mutation that the others do not.

At 111 markers, the probability plummets to 84.5% for Spira and 92.9% for Spiro - despite the fact that in both cases there are four mutations. Apparently Spira's mutations are more significant than Spiro's. (Two of the four mutations are on the same markers and two are on different markers.)

Nine generations still looks good. Less certain, yet a reasonable guess. Perhaps even the early 1700s, if you believe that sort of thing.

Thanks to Igor Schein for his assistance in counting up the markers.