And Sometimes The Record Is Plain Wrong

We all know that records can be wrong. Census records are based on self-reporting and depend on proper recording by the census taker, not to mention transcription errors before they appear online where we can find them in an index. Passenger lists have much the same problem.

The informant on a death record may have given the wrong parents' names, birth place.or other information. Naturalization records often have errors.

Birth records are less likely to be wrong, but it happens. Marriage records should not be wrong - the bride and groom know their ages, birth places and parents' names - but generally no supporting documentation was necessary so there could be errors. Especially when the bride is older than the groom and takes off a few years. Draft cards should be right, but are not always.

So I am not breaking any new ground in the title of this blog. Nonetheless, it's a story worth telling.

Earlier this week, I received a note from the great Logan Kleinwaks who was looking at Sambor records and came across one of mine.  He wrote: 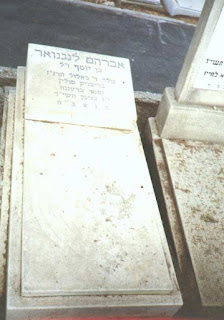 I know this couple. I received a large amount of information from the eldest daughter, Mahla, who died nearly four years ago. She also sent me a recording of her recollections of growing up in France and escaping Europe. I have met at least two of the other three daughters and I think they are all still living.

The father's grave lists him as Avraham, without the Chaim, though Mahla's grave has his full name. But on the grave, we see that Avraham's father is Yosef, not Yitzhak as in the marriage record.

The grave is correct. Yosef Pikholz was born in about 1865 to Yeroham Fischel ben Moshe Pikholz and Gittel Luftschein. He was named for father's mother's father's father Yosef Steg as were a whole set of Yosefs in that family. Yosef married Reisel Langenauer and the family used the Langenauer name. We know all this every which way.

The Sambor marriage record is plain wrong. Sambor is the bride's town but obviously the groom was there and knew his father's name! It happens. So by all means, find documents - but you cannot assume that any single document is precise. 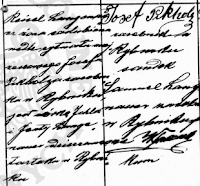 UPDATE:
Lia Landberg pointed out on Facebook that the second note in the far right column of the marriage record says that the birth record had been presented.

So let me show you that the birth record gives the father's name as Josef, and includes his signature.


I just heard from a known-but-missing branch of one of my mystery Pikholz families. This could be one of those where MtDNA may be very useful.

This is the family. More as it happens.
Posted by IsraelP at 9:23 AM