Stiff and Sore - Day One: Zilina

The cemetery visits began today, Monday. We met Pavel Frankl at the entrance to the cemetery in Zilina a few minutes walk from where we are staying. The cemetery has been in use since 1857 and still serves the local Jewish community. It is clearly identified, has a large chapel for funeral services and well-kept graves in numbered rows, with the locations listed in neatly organized books. It is a model of what we would like to find in any cemetery.

Pavel himself looks after all the Jewish cemeteries in the area, though the others have not been used for decades. He has also written a book (500 pages, small print, lots of photographs) about the Jewish community of Zilina and has written a book on the subject - in the Slovak language. Cyndi bought a copy.

We were not there for long because we wanted Pavel to take us to the Kotesova cemetery and knew we could come back to the one in Zilina at our leisure, though it is generally closed before noon. (The First of May is a holiday here, hence the morning hours.)


Pavel told us that students had cleared away much of the trees and branches a few weeks ago, but what with the hillside, a bit of mud, and the rest of the underbrush it appeared more than a bit treacherous. 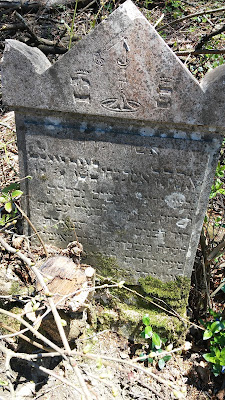 Cyndi expected to find loads of our Zelinkas here and some others from her part of the family. It was not so simple, starting with the fact that most of the tombstones do not have surnames. Many others are only partially legible or are broken or inaccessible. Many of the better quality stones were stolen by neighbors or local government.

Among the more interesting stones is Esther, the wife of Ber Meilech. Her father's name does not appear and there is a very nice inscription, but the interesting thing is at the top.

I had not seen this particular symbol before, but I have no doubt about its meaning - a married woman who died young. 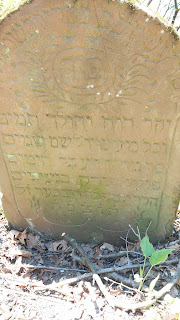 Another interesting stone is Yosef. There are certainly many stones where the deceased's name appears as an acrostic in a set of often rhyming lines.

This Yosef (on the left) is an example. We see his name Yosef the son of Dov Ber on the fifth line. We also see the four letters of Yosef at the beginning of the first four rhyming lines.

This is the oldest grave we saw. The year is off the top left edge of the photograph and shows 5590. This Yosef died in late 1839.

But it was a different Yosef whose stone was more interesting. The date of death is the twentieth of Av 5670 (1910) and it appears at the very top, outside the photograph below. 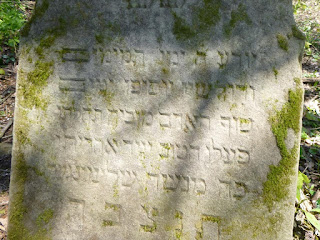 There are four rhyming lines and the fifth says "ben R' Menashe Schlesinger."

But no given name at all.

It took a few minutes until I realized that the four rhyming lines begin with the letters of Yosef. I don't recall seeing a grave where the only appearance of the deceased's name is in the acrostic. Certainly not when there is no emphasis of those letters. 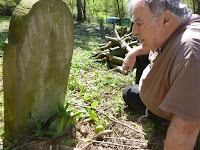 I spent a lot of time on the ground. Mostly awkwardly. Usually long enough each time for my knees and feet to become stiff. This is one of my better positions. And it's a Zelinka grave as well, though we don't know who she is.

I ended up on the ground for maybe eight graves, both for the photography and in order to decipher and copy the inscriptions. We have more days like this ahead of us, both here in Slovakia and in Hungary.

Late Tuesday afternoon, Lydia came to visit at our Airbnb apartment. I was introduced to Lydia by Miri Turcan - a DNA contact - who lives in Israel but who comes from Slovakia. Lydia was born in Zilina and now lives in Prague, so we have been talking about meeting up for some time. She speaks no English, but some Hebrew as she lived in Israel for two years. Neither Cyndi nor Linda is conversant in Hebrew.

The parents of Nathan and Mali are Isaak and Sari Zelinka and Lydia told us that she thinks Sari is a Polizer. Now that I think about it, Nana's half brother Uncle Fred had said there was a relationship with the Polizers but Nana thought it was on Uncle Fred''s mother's side, not on our side. Maybe not. Or maybe both. In any case, I am recording this with a question mark, because we have only Lydia's "I think" to go on. 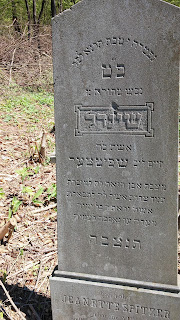 Lydia sketched out her family - her children and grandchildren, and the same for her brother and her three first cousins. One of those first cousins, Milan, was supposed to meet us in Prague, but we didn't connect properly. Linda will be returning to the US from Prague next week and will meet there with Lydia and Milan together. That should give me time to organize all this new information into a printout so that Lydia can check it and add appropriate details on dates, spouses etc.

Lydia's great-grandmother has a sister Jeanette Spitzer whose tombstone was one of those we visited in Kotesova earlier today. She died in 1891.

Lydia did a DNA test with MyHeritage and just sent it in. We'll get her on GEDmatch when she gets her results. She also has a tree on MyHeritage. She is also related on her other side to Dana Michailovici from Kiryat Hayyim and perhaps we will get together in Haifa next time Lydia is in Israel.

Lydia's mother has a sister who is married to a Rosenzweig. We'll have to find out exactly how he fits into our family too.

Tomorrow we look for Nana's grandparents.
Posted by IsraelP at 12:13 AM