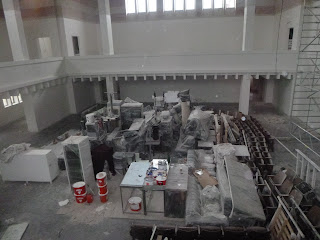 Actually we started our day in Zilina. Our Airbnb landlord Marek, not Jewish, is doing the restoration of the Zilina synagogue and we had a tour of the ongoing work.

Marek talks of being finished in two weeks.

The synagogue was built in 1931, so it did not fulfill its intended function for very long.  There are no photographs or drawings of the Ark, so they are only guessing on that.
Of course it is not intended as a house of prayer now either, but at least it has returned to the hands of the Jewish community after decades in the possession of the Communists and later the university. Its most recont use was as a movie theater.

Povazska Bystrica
My previous visit to ancestral towns in Europe was seventeen years ago in east Galicia and I had this picture in my head of dusty, dreary towns that looked like something out of the past. I knew in my mind that Slovakia is more modern, but had no idea how much so. (Said the fellow who hasn't had Internet for the past two days.) Povazska Bystrica is a modern city of some fifty thousand souls. I knew it by its Hungarian name Vag Besztercze which no one there seems to know now at all.

My (and Linda's) great-grandfather's parents are buried there - she died in 1905 and he in 1917. We do not have grave locations but it turns out that this would have been meaningless. 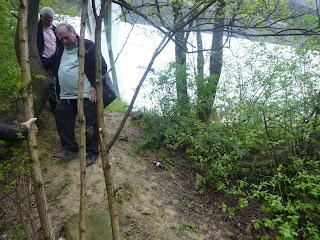 We met Peter Simecek, a local genealogist (non-Jewish) who had offered to help us out. He took us to the cemetery. It's on a hill, not as big a mess as Kotesova, but no simple visit. Oh and did I mentioned that it had rained all morning and that it was cold? Lots of mud, slipping and sliding.

Linda, Cyndi and I all took spills just getting into the cemetery. Oh and did I mention that the gate was locked so we had to take an alternate route? 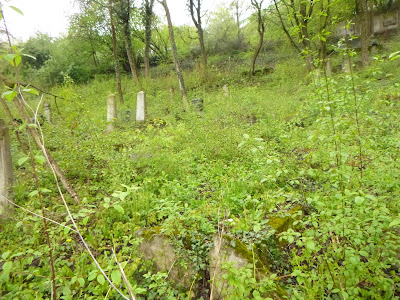 As expected, there are stones in good condition and others which were not legible. Most of the tombstones are on pedestals and many had fallen face down or had been stolen.


There are quite a few Politzers, a name of interest since our meeting with Cousin Lydia the previous evening. (It may be the maiden name of our third-great-grandmother.)

As the previous day, I spent quite a bit of time on the ground, this time in the mud. 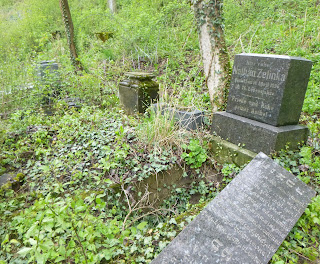 The biggest find was Nathan Zelinka, the brother of my great-great-grandmother. (Remember, it is her grave and her husband's that we really wanted to find.) Nathan Zelinka was a major community figure in Zilina, but is not buried there. So here he is fifteen miles away.

Nathan was born about 1821 - based on census records - and had eleven children with his wife Hani Kohn who died in 1882. (We do not know where her grave is.) A few months later he married Mari Milch, who was fifty years old and likely married before.

Nathan's daughter Jeanette (Scheindel) Spitzer was one of the graves we had seen in Kotesova the previous day.

Nathan's stone had toppled over at an angle, but it is face up and very clear, in Hebrew. The pedestal has some German writing which gives his date of death (April 11, 1896) and age (76).
Nathan's father's name does not appear anywhere, but this is obviously our uncle. 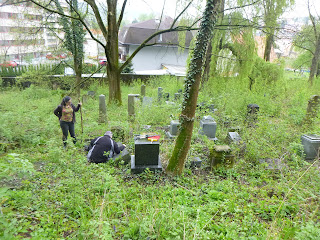 What interested me were the two graves to the left. The three are clearly together - a family group. The stones had fallen face down, but the one on the far left had an inscription on the large pedestal telling us that he was a man who lived to age ninety-two. Who is he and who is the one in the middle, with the smaller pedestal? Maybe Nathan's first wife Hani, but that emphasizes the question "who is the man?"

The two stones are face down and likely well preserved but we obviously were not going to lift or turn them. 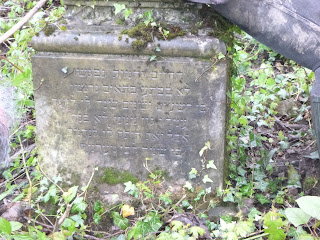 Mali (Miriam) Zelinka Rosenzweig, Nathan's sister is buried somewhere in this cemetery. My  great-great-grandmother. Almost certainly her husband Ignacz (Yitzhak Yehudah) Rosenzweig is as well. Perhaps she is next to her brother who had died less than nine years previous? Were they close, other than being adjacent in age order? Who knows!

Yitzhak Yehudah Rosenzweig did not die at age ninety-two. Nana always said he was ninety-six, which is why we "know" he died in 1917. Might the stone be in error? One son was in Pittsburgh, another had predeceased him. At least one of the other two was elsewhere, probably Budapest.

I want those stones turned over. I asked Peter if we could hire someone local to do that or perhaps we could get Pavel Frankl in Zilina to find someone to do this. After all, Nathan himself is an important Zilina personality.

I left stones on the three graves. Stones that I had brought from Jerusalem. 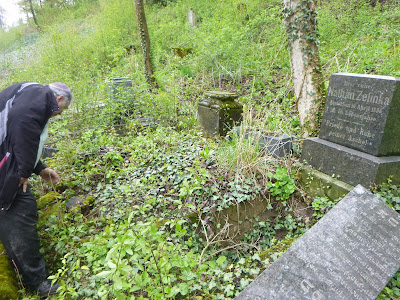 Puchov
I had a general interest in Puchov, a town of maybe 20,000 people. According to the census, my third-great-grandfather Simon (Shimshon) Rosenzweig had been born there. I figured it was worth a walk-around even though I had no specific expectations.

Peter took us there and left us in the hands of Michael, whose late father had been in charge of cemetery upkeep. 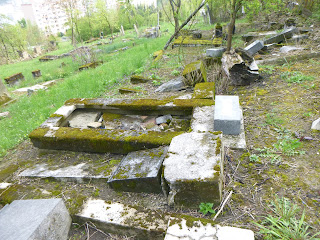 The cemetery is clean and mostly at the top of a hill. It's generally what we would call "good condition" but again, no so much the tombstones.

The surprise here was that we found some of Cyndi's Deutelbaums. There was a couple whom she knew from the records and an adult daughter who predeceased the mother.

Clearly most Jewish of the families were represented in most of the towns in the area. 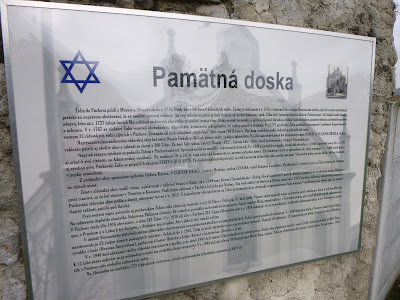 Next up, Rajec and Domaniza.
Posted by IsraelP at 10:14 AM