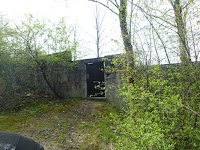 Wednesday we were on our own. First stop Rajec (pronounced Ra-yetz), about ten miles from Zilina. Not only were we on our own but we had no contact information for the person with the key. We did, however, have the precise location of the cemetery so off we went, hoping to find some Rosenzweigs and who knows what else. 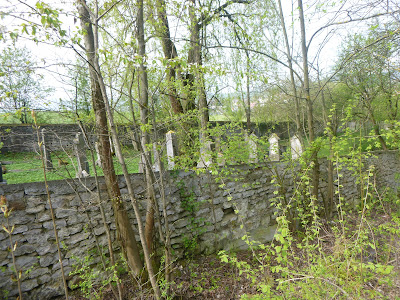 We were able to identify the cemetery from the road with no trouble. The door was locked and it was surrounded by a wall on three sides and a chain-linked fence topped with barbed wire at the top end.

Standing on a tree stump, I was able to see over the wall in a few places.

The cemetery seems to be in excellent condition and many tombstones appear, at a distance, to be legible. But we coudn't get inside.

In a group project of this sort, each person brings certain strengths. I am the one who reads Hebrew. Cyndi will pick a conversation with anyone, even though all she speaks is English. Linda? Linda is tall and climbs over walls.

And off she went, the non-genealogist, photographing all the graves in the cemetery from top to bottom. 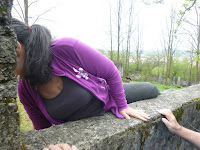 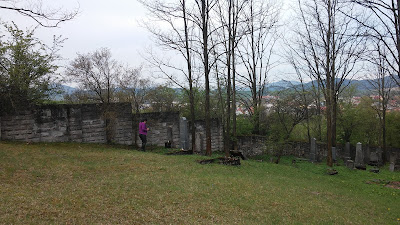 There were probably eight or ten Rosenzweigs, three of them Jakob. A few others I don't recognize off hand. The non-matching Jewish and secular names doesn't help.

There is a Rozalie (Rachel) Rosenzweig who died in the summer of 1926. She could be my great-grandfather's sister-in-law, but her grave calls her the wife of Yaakov, while my g-gf's brother was Simon. He still may be the same person. The staones are very hard to read and I'll have to work on them later. 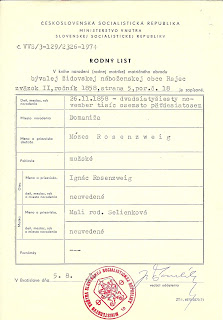 Next stop was Dominiza, a very small town not far away. That is where my great-grandfather was actually born in 1858. It was closer to the dusty village image I had from east Galicia, but even it showed some modernity.

Cyndi's directions sent us up to an empty field behind a row of houses - obviously the wrong place. So we followed Plan B, find city hall and ask.

Finding city hall was itself a project and we asked asked a woman named Melania for directions. She is a chemist in a lab in Povazska Bystrica and her English was quite good. She got into our car with her six year old Matthew and took us to city hall where we found someone who said she would search her records for Rosenzweigs and get back to me by email.

Then Melania found us a local historian named Josef, who speaks no English, but eventually he found us the remnants of the Jewish cemetery fenced in the back yard of locked house. On the way up, Josef told us that there were basically three Jewish families in town - the Rosenzweigs, the Zelinkas and the Spitzers. As we know, they married each other. As one might expect.

We got a look through the fence by going through the field where our search had started. The cemetery is right behind where the synagogue once stood and has very few stones. But the one we could see was Joseph Spitzer, the husband of Nathan Zelinka's daughter Jeanette, whose grave we had seen Monday in Kotesova.

Josef said he would contact Pavel Frankel in Zilina about fixing it up and would try to get in and send us some photographs.
Every person we met in Slovakia was helpful and friendly. More of both than we had any right to expect. As we prepared to wrap up that phase of our trip, we could only speak well of our Slovakian experience.

We were tattered and torn not so much physically (though I must replace my shoes when I get home), but by the experience of seeing these places where the various branches of our families lived for generations.

The Bytca Archives
We had one more stop Thursday morning, at the state archives in Bytca. It was across the street from the synagogue, which is undergoing some sort of renovation, or at least fund raising for that renovation. 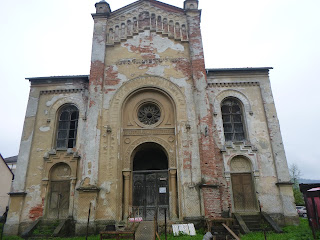 The archives are upstairs in a grand old courtyard that one could easily mistake for abandoned. Here again, a nice local woman led us to the place after we passed it by a couple of times. 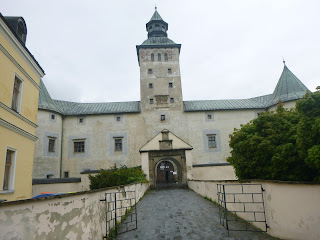 When we went in, we found a working archives with a few microfilm machines, some functioning. A couple of genealogists from Hungary were working with the actual documents, bare-handed. There were a few other researchers there as well. It was all in one small room, with the microfilms stored in other rooms. 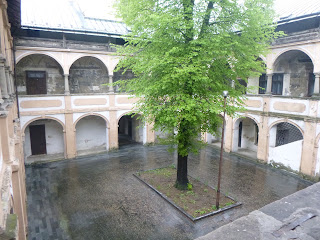 We spoke with one of the Hungarian genealogists and their translator Stephan, learning that they had done the genealogy work for former French president Sarkozy. We exchanged contact information and Cyndi will probably follow up with Stephan later on.

Cyndi worked her magic with the archivist and she permitted us to photograph their paper index showing all their microfilm holdings. We will make a list of the Jewish records and perhaps put together a funding project to get them transcribed. As we left, I thought about Marla and Jay Osborne who actually live in places like this in order to get the work done.

Next stop Budapest.
Posted by IsraelP at 2:31 PM