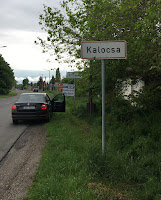 Linda and I arrived in Kalocsa early Sunday afternoon. We had been told that the old cemetery was unfenced and near the bus station and that the neolog cemtery was locked and we had an address. We wanted the old cemetery. I discussed our Sterns at some length here but a recap is in order. I have the 1862 marriage record for my great-great-grandparents, Fani (Feige) Stern and Simon (Shemaya) Bauer and it names her father Salamon Stern from Kalocsa. No mother's name.

There is a death for a Salamon Stern on 6 May 1862 but we are not sure it's the same man. Sure, the death record says he was born in Paks, not Kalocsa so there may not be multiple Sterns in town, but I was not prepared to

jump to that conclusion. Especially since there are no descendants named Salamon, or its Jewish equivalent Shelomo. Feige/Fani was twenty-one when she married and Kalocsa birth records are available only from 1851. There are births of two sons in 1851 and 1853 to Salamon Stern and his wife Betti Grunwald - but even if this is the same Salamon, who knows if this is the same mother. 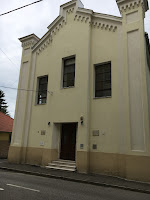 So I was fishing, playing "Let's see what happens."

After driving around a bit and finding nothing, we checked in at our hotel. It is small, simple, family-owned and run and inexpensive. And friendly. I'd recommend it to anyone looking for a hotel in the area. Linda went to talk to the owner about the cemeteries and his English-speaking son took her to both cemeteries and the synagogue.

The large sign below is outside the synagogue. There are names on both side, commemorating victims of the Holocaust and other Jewish "victims of Fascism." 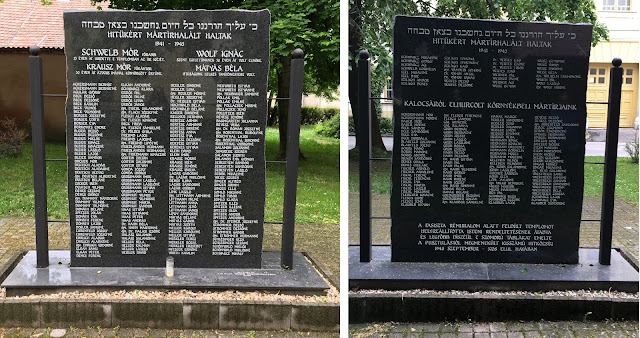 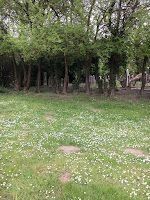 The old cemetery is on the main street about five minutes' walk from the bus station. It is clearly visible from the street,.Notice, no fence or wall, but it appears to be in good condition.

I wanted to photograph all the stones, but first we went to look for Sterns, particularly Salamon, who is probably our third great-grandfather. It took about five minutes until Linda called me over to see it. At the far end of maybe the fourth row from the front, standing tall with Hebrew on the front and Hungarian on the back. That is the style of many of the Hungarian Jewish graves. 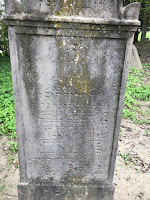 Linda took pictures of both sides, even before we started to clean it up. His secular name is Salamon, but his Jewish name is not Shelomo. His name is Zelig. As I wrote above, I was concerned because no descendant was named for him. In fact, we do have a Zelig - the elder son of my great-grandmother Regina Bauer, Sigmund Rosenzweig. Uncle Sig lived in Cleveland and died at age twenty-seven during the influenza epidemic in 1918. He left two children. My cousin Lee's middle name is Zelig in his memory.

The reverse side, in Hungarian, gives his yahrzeit as 16 Iyyar 5622, but this is incorrect. The yahrzeit on the Hebrew side is 6 Iyyar which corresponds to the death record (above). The stone also says he is fifty-six while the death record says fifty-seven. We shan't quibble.

Here is the full Hebrew inscription, with transation. His name "Zelig Stern" appears as an acrostic. The Stern tombstones that I saw later use the same style. (The word in red is not clear.) 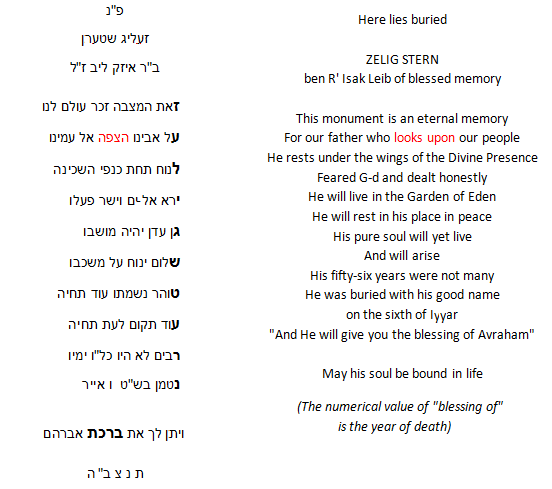 We found one other Stern on Sunday - a woman named Bluma, Borbola as a secular name. I was too excited to deal with anything further, so I decided to work on the above inscription Sunday evening and then go back to photograph the cemetery, cleaning stones as necessary, early Monday morning. 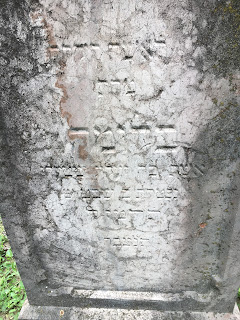 Monday morning I was in the cemetery (myself) at twenty past six. After filling in some of the unclear words on Salamon's stone, I went to Borbola. After cleaning, I saw that she is identified as "wife of Zelig Stern." She died on the second of Shevat 5647, 27 January 1887. It doesn't say how old she was.

Bluma's epitaph is in acrostic form and does not identify her parents or her maiden name.

I photographed the rest of the stones in the cemetery as best I could. I found two two other Sterns, both women and Stern is the maiden name for each.

One is Leah (Eleonora), married to Aharon Schiffer. She died at age seventy-six on 6 Nisan 5658 (1898). Her mother is Beila. She is buried next to her husband, both with acrostics.

The second is Mindel (Marie) Engel who died 6 December 1872 at age fifty-five. Her father is Shimon. I do not know who her husband is. Here too, the epitaph is an acrostic.

My Monday photographs are still in my phone and I may have more to say about them later.
Posted by IsraelP at 6:46 AM