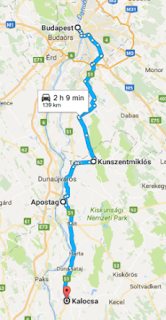 I reported on Days Six and Seven yesterday, but Kalocsa was bracketed by two visits to Kunszentmiklos on those same days. I have mentioned this Hungarian town before - it's where my great-grandmother's father's family lived. The town is full of Bauers, many of whom had lived previously in Apostag, a bit further south.

The plan was to visit the cemetery in Kunszentmiklos Sunday, then get to Kalocsa and perhaps stop in Apostag on the way up to Vienna Monday. I have a whole list of Bauer graves with locations, but the three I want specifically are my second-great-grandparents Simon and Fani (Stern) Bauer and their son Lajos, who is my father's namesake. I need to see those to clarify some things about my father's name.

But I also have a general interest in all the Bauers since they are almost certainly our relatives. I just have no idea how they fit together.

The Kalocsa stop I discussed yesterday and Apostag would be a general fishing expedition for whatever Bauers we could find. 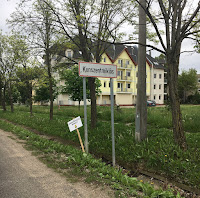 We were told that the cemetery in Kunszentmiklos is a) in very poor condition and b) locked. The person we had spoken to about accompanying us was not able to make it and left us with this bit of advice:


Have never been there, the word for Jewish cemetery is "zsidó temető" print this and show them this and then they will take you there. Don't talk or give money to gypsyes if you don't want to be robbed. People are usually very helpful. The Christian cemetery is on Bocskay utca. Behind it is the JEwish cemetery in trees and bushes. GPS coordinates are 47°01'03.5"N 19°06'25.3"E


I hope with this info in hand you can manage:) If not, call me.

The bit about the gypsies became our running joke whenever we had to interact with anyone.

I also reached out to a few other people, but did not get responses by the time we set out from Budapest Sunday. We arrived at Kunszentmiklos and found the cemetery. Unlike at Rajec, there was no easy climbing over the wall. We decided to go on to Kalocsa and come back to Kunszentmiklos on our way north Monday, perhaps after buyng a ladder.

I emailed all our contacts once again asking who might know how to get a key and this time they all responded with a phone number of Peter Tamas, the the Director of the Countryside Cemetery Office of the Federation of Jewish Communities of Hungary. We asked Nora, the daughter of the Kalocsa hotel owner, to make the call and she came back with the name and address of the man with a key. Of course Janos Fokics speaks no English and is "very old." She sent Linda a note in Hungarian she could show Janos, so he would understand what we need. And we heard once again that the cemetery is quite impossible due to the vegetation.

So we didn't buy a ladder. 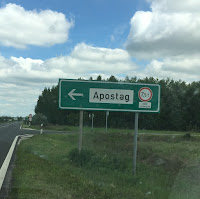 Monday we made the hour-long drive from Kalocsa to Kunszentmiklos, not stopping at Apostag along the way. With our trusty GPS, we arrived at Janos' house at about 12:30. We reached around the gate and let ourselves in. After trying several doors we found him. He isn't THAT OLD. He started to give us a key and a small crowbar, then we heard his mantra for the day: BEEG PROBLEMA.

The ladder didn't fit into our car due to our bags, so he and his wife unblocked their own car which was in the garage and we set out in two cars for the cemetery. This whole process had taken a good half hour. 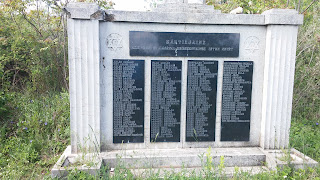 As we entered, we saw a monument in front of us with a list of local Holocaust victims. There was much vegetation on both sides but we could see a few tombstones. A very few. Linda and I split up and began looking for Bauer graves among the branches... and thorns... and trees... and the undergrowth that trapped our legs with every move. BEEG PROBLEMA.

It turns out most of the tombstones were behind the monument in the thickest part of the vegetation. Linda found what looked like a whole row - several in fact - of very nice legible tombstones, some of them Bauers, though not our three. She called me over and after getting to the first three or four, worked her way out and let me proceed. So long sunlight, hello forest cover.

I had small hedge clippers in my hand, my phone/camera in my one pocket and a plastic bag with my notebook, pen and glasses. It was very tough going but many of the stones were excellent. It was impossible to read the older ones, not necessarily because they were worn, but because I couldn't get at them properly. I decided to wear the glasses.

I pushed my way in deeper and deeper, cutting my arms on the thorns. (Yes, I was wearing a short-sleeved shirt!) At some point the plastic bag had enough and fell apart. The notebook, pen and my glasses case went into my pants pocket. Then I had enough and decided to try to work my way out, taking a slightly different route. My glasses case was no longer in my pocket. I was not going to try to retrace my steps to look for it.

Eventually I was out. Without my notebook. the notebook with all the inscriptions that I had written down in Kalocsa. I went back in, this time trying to retrace my steps exactly. The broken vegetation showed the way somewhat. I fought my way out again and mentioned to Linda that the notebook was way more important than the glasses case I had lost. She asked if the glasses were inside and I said no they are ... here... on... my... OH NO!

Back in once again, stepping very carefully so as not to crush my glasses by mistake.. After about ten minutes I found the case. The scratches on my arms really hurt. Stung mostly. There was blood on my scalp. Then I saw the glasses. they had fallen lenses up. I probably wouldn't have seen them any other way. After all, I wasn't - your know - wearing my glasses.

The whole adventure was about two and a half hours. Janos was very patient. Linda too. We hadn't found what we were looking for. But in the end, we hadn't lost anything either.

We all exited through the door. I gave Janos most of my remaining Hungarian money. He made a sound which meant either "thank you" or "cheap Americans!"

But this was not the mess that we had in Slovakian cemeteries or in the back of the cemetery in Budapest. The terrain is flat.The tombstones are by and large quite good.  And they are our family, hidden there under the jungle.

We just need some Agent Orange or a herd of goats. And someone to haul it all out. A few thousand dollars would probably do it. Once it is properly documented, maintenance would be optional. Maybe I should talk to someone in charge. If there is someone in charge.

Next stop Vienna. GPS said three and a half hours. GPS lied. I needed a shower and a change of clothes.
Posted by IsraelP at 7:34 AM