I have mentioned my great-grandmother's Bauer family a few times, including here. My 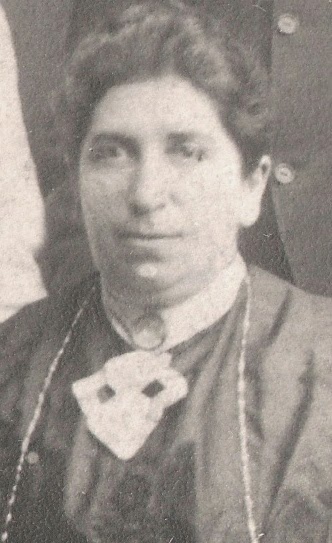 father's maternal grandmother, Regina (Rivka) Bauer (right) was born in Kunszentmiklos Hungary in 1870, the third of seven children of Simon (Shemaya) Bauer and Fani Stern. We know the names of their fathers - Lasar Bauer and Salomon Stern - from their 1862 marriage record and we may have the name of Fani Stern's mother as well. That marriage record gives the ages of Simon and Fani (28 & 21), so we know more or less when they were born.

As I wrote here, we have had a collection of Kunszentmiklos records for the last fifteen years and some time ago I put a summary of them online.

Before Kunszentmiklos, the Bauers lived in Apostag and I have a collection of those records as well, but have not done anything with them.

As many of you know, I work with Facebook open and occasionally something important shows up unannounced.

Regina Bauer's mother Fani Stern was from Kalocsa, so I went to have a look. There is not much there, but I also had a look at Apostag and Kunszentmiklos.

Apostag also has very little, but for Kunszentmiklos there is a list of two hundred thirteen burials.

Nearly forty of those are Bauer or Bauer-related, among them both Simon and Fani, my great-great grandparents. With birth years, death years and grave locations.

Also appearing is their son, Lajos Bauer, 1875-1917.
I know the birth year to be correct, but had no idea about the year of death.

My father was named for him.

Some weeks ago, I was ruminating here on my father's name, Eliezer Yitzhak, and speculated that the Yitzhak might be from someone other than Uncle Lajos. I wondered if we would ever be able to answer that question, but if there is a legible tombstone in Kunszentmiklos, perhaps we can.

The information on the cemetery site includes only name, years of birth and death and grave location, with women identified by their husbands' names. No precise dates, parents' names or cause of death. Nor was it clear if the information came from death records or from the tombstones themselves. (Are the stones even there anymore?)


I did not succeed in getting a reply from the folks at the website, so I contacted a researcher I know in Budapest. This is a real "I know" as we met on the way to Salt Lake City last summer. He reads Hebrew and is proficient at tombstone photography. We discussed his going to Kunszentmiklos to photograph all the Bauer graves. He told me that the later set of death records - 1896-1939 - which I did not see before, is available at the archives in Budapest. He thinks those records are the source for the cemetery website, but with the additional information I am looking for.

He has given me a quote for the photography in Kunszentmiklos and will give me one for the archives, as well. My family members should be on the lookout for a fundraising letter from me in the next few days.
Posted by IsraelP at 2:56 PM