Sam and Sarah, Ben and Sadie

My Denver third cousin Joe Pells was one of the last people to sign up for DNA testing during the big sale that FamilyTreeDNA had in December. Joe is the older brother of the late, great Betty Lee (Buzy) Hahn who introduced me to Skalat nearly fifteen years ago. I met Joe a few years back when one of his grandsons celebrated his bar mitzvah here in Israel. 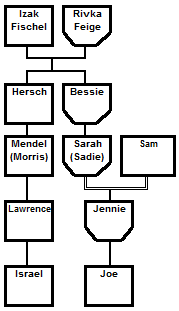 When I first asked him to test, he was not keen on the idea, but now he has both an MtDNA maternal line test and an autosomal Family Finder in process. Joe's mother is the only all-female descendant of our great-great-grandmother, Rivka Feige Pikholz. I have no idea where that test might lead, but at least it will soon be in the system, available for potential matches.

Joe is also the first Family Finder test we have for descendants of my great-grandfather's sister Bessie. (For his other sister, Leah, we have one test and a second on the way.)

But none of this is why I am telling you this story. Joe wants to learn something about the family of his maternal grandfather, Sam Francis who died in Denver in 1963.

Sarah (later Sadie) Frankel, was born to Bessie Pikholz and David Lozel Frankel in December 1872 in Skalat  and arrived in New York in September 1891, about three months shy of her nineteenth birthday. She travelled with Dwore Pikholz, a cousin of some sort, whom I may write about in a few days. It is not clear whether they travelled together because they were cousins or just because they were two teenage girls from the same town.

According to what Buzy Hahn told me years ago, Sarah married Max Hochman and they lived in Baltimore. Max died while Sarah was pregnant with their son, who was born in July 1894. According to the story, the family sent Sarah's cousin Sam to the United States to marry her and he arrived after the birth. Sam gave the child his surname and the family name became Francis. They later had a daughter Jennie (Joe and Buzy's mother) and a son Max who died as a baby. Joe confirms this story.

I had found no documentation when I did this a few years ago..

A word about the surnames. Frankel is of German origin, indicating that the bearer (or his ancestors) came from France. Francos (pronounced Frantzos) is the Polish equivalent. Franzos, best I can make out, is a Germanized spelling of the Polish version. We assume, but do not actually know, that since Sam and Sarah - now Sadie - are some sort of cousins, Sam was originally Frankel, like his wife.

Oh, and Sam is actually Szulim (=Shalom) according to his tombstone. His parents' names are unknown.

So I went to work on the documents. I still see nothing about Max Hochman - not his marriage, not his death and not the birth of a son. But Joe wanted to know about his grandfather, Sam, Sarah/Sadie's second husband..

I have not found them in the 1900 census, but I do see Jennie's 1901 Manhattan birth in which she is called Frankel. So at that point they have not yet become Francis. They had by 1910.

In the 1910 census, we see Sam, Sadie, Jesse and Jennie Francis in Denver. Jesse is not the name that we know for the older son, but perhaps that was changed at some point. Or perhaps the census entry is wrong. Or they reported his Jewish name and the census taker heard it wrong. Fischel can sound like Jesse. Can't it?

But I was looking at the census records for something else. Immigration. Or Sam's birth.

The son Jesse was listed as being born in New York, not Maryland. But I do not see him in New York City by any name. Sam's immigration is listed as 1892, which is earlier than in the family narrative. Sadie's immigration year -  1891 - is correct. Sadie is 37 years old (correct), Sam is 35 (no birth record found). They are listed as being married for seventeen years, which is incorrect and that Sadie has borne two children, both living, also incorrect.

In 1920, Sam Francis is 45 (consistent), Sadie is 44 (having aged seven years in the previous ten) and Jennie's birth has moved to Colorado. Sadie's immigration is 1894 and Sam's is 1895. Maybe no one was home and the census taker interviewed a neighbor.

In 1930, the household has grown to include Jennie's husband and her son Joseph. Jennie's birth has returned to New York. Sam is 55 and Sadie is 58, having made up the lost years. Both were twenty-one when first married. Both immigrated in 1894. Who answered those questions? Maybe Jennie.

The 1940 census does not include immigration or marriage information, but we may note that Sam is 65 and Sadie is 64.

None of this helped me turn up a passenger manifest or birth record for Sam/Szulim.

Then Joe remembered Uncle Ben. This is why I am telling you this story.

It seems that Joe's grandfather Sam had a younger brother Ben, who lived in New York or New Jersey. His wife was also Sadie. Maybe that would lead us somewhere.

In the 1920 census, Benjamin and Sadie Francis appear with their three children in New York. Benjamin is 32, Sadie 29. The eldest child is seven. Both immigrated in 1903. He had applied for citizenship, but the only candidate that seemed to fit was born in "Kief Russia."

I may have had better luck with passenger lists. Benjamin Franzos, age nineteen, arrived in New York in 1903. He had come from Zagorze, which is very close to Zalosce. We actually have a Franzos married to one of my Kwoczka uncles, also from Zalosce and it will be interesting to see if there is a DNA match between her grandson and Joe. There are no records for Zagorze and no one in the Zalosce records that might be Sam's brother Ben.

My last stop was New York marriages and this is why I am telling the story. On 22 January 1912, Sadie Stern married Benjamin Francis in Manhattan. Joe ordered the record. Since Sam and Ben were known to be brothers, at least we could find out Sam's parents names, even if that took us no further. 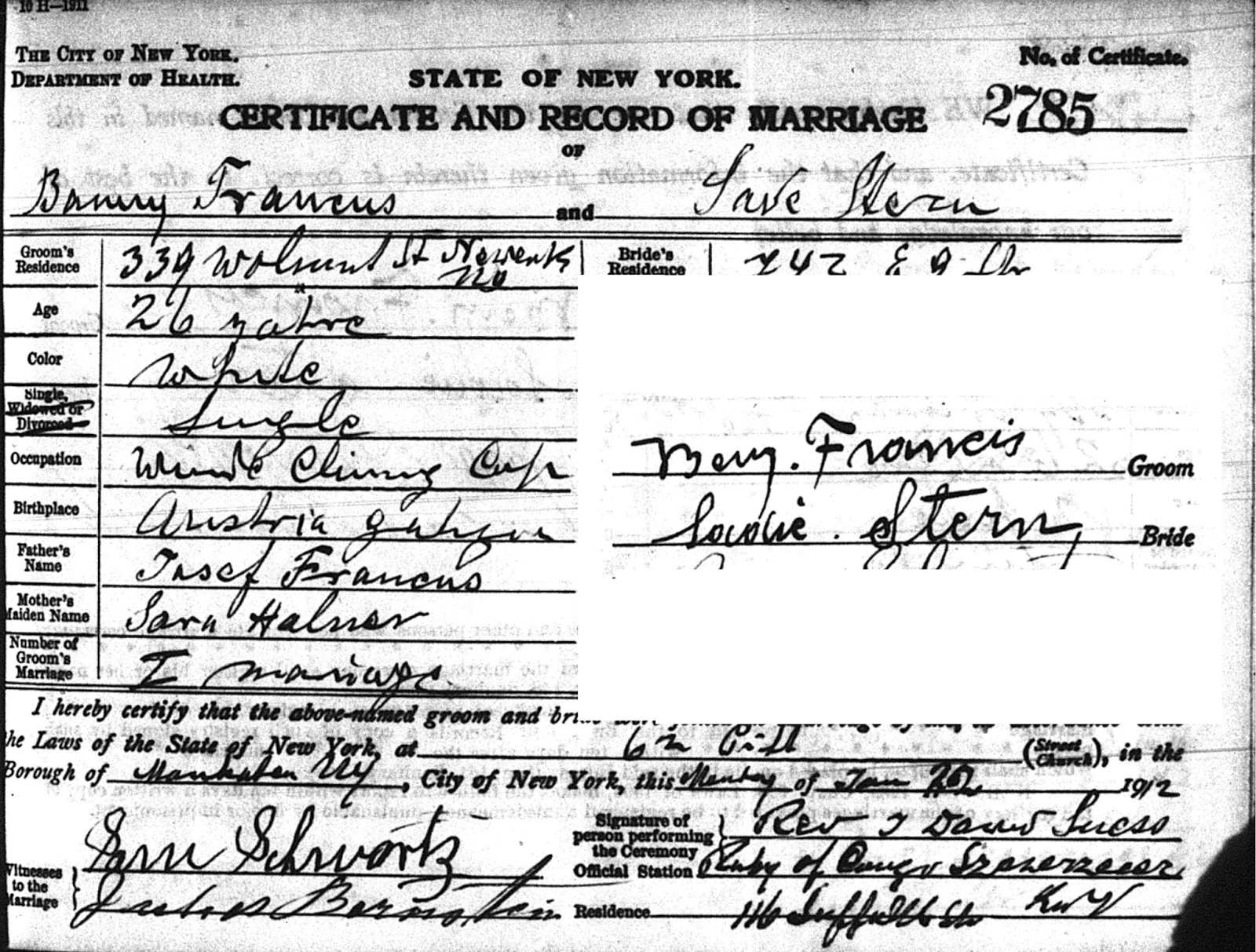 The record arrived and the groom's name seems to be "Barry Francus," but the signature (which appears on the back, but which I brought forward to show you) says "Benj. Francis." That must have been what the indexers used.

The bride's name, Sadie Stern, is also clearer in the signature.

So Ben's parents are Josef Francis and Sara Halner or maybe Halsner. I suppose Ben has already transferred his  American "Francis" to his father who was Franzos or Francos or Frankel. No town name, just "Austrian Galizia." So we have kind of dead-ended with the mission Joe sent me to do.

But that is not why I am telling you this story.

Look at the bride's information.

Sadie Stern, Ben's wife, was born in Skalat Austrian Galizia. She said she was twenty-one when she married in 1912.

Her father is Marcus Stern. There are fourteen Stern records in Skalat. No Marcus, no Sadie. 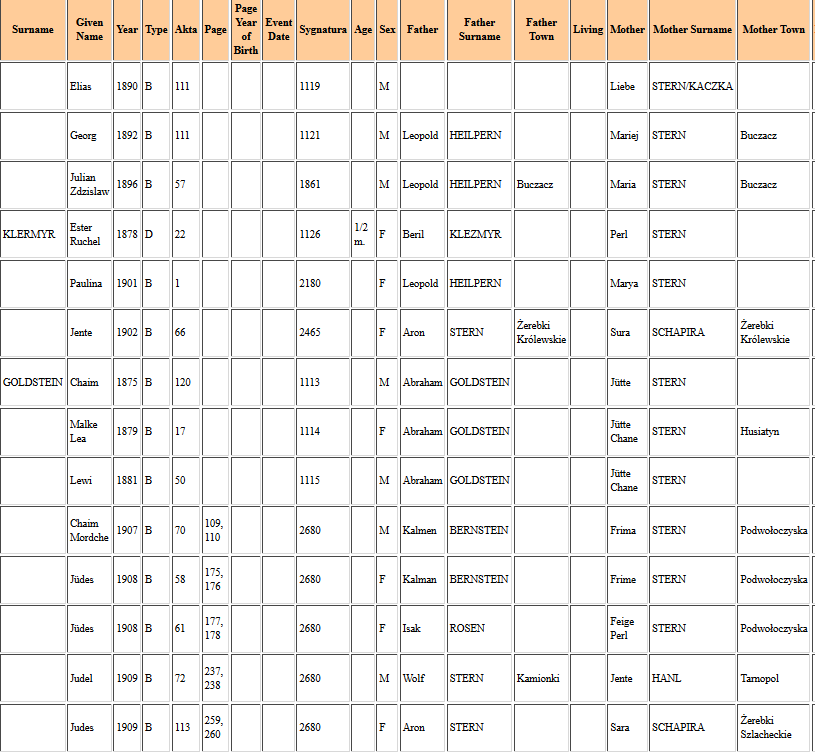 Most of the Sterns here are the mothers and almost all fourteen come from someplace else.

Maybe we can learn something from Sadie's mother. And who might that be? Well, knock me over with a feather. Sadie Stern, a bit player in this story, is the daughter of Ester Pickholz. And I haven't a clue who she is. We have nine Ester/Etie/Ettel Pikholz descendants from Skalat, born in the 1850-1877 range, but they are all accounted for. Either they died young or they are married to men who are not Marcus Stern.

Someone had a daughter Ester and didn't tell me! The genealogists' lament.

(I obviously need to find some grandchildren of Sadie who have some DNA to spare.)

I thought I was not going to turn up any more "new Pikholz descendants" from that period. What do I know?!

That's why I told you the story.

Housekeping notes
A friend of this blog, Roberta Estes, wrote an important blog a few days ago about small segments of DNA. It is long, but worth a read. I plan to dedicate a post to Roberta's thoughts, probably next Sunday. It's important and I need time to get my own thoughts organized.
Posted by IsraelP at 7:00 AM