Nine weeks ago, aftter we received my late brother's Family Finder results, I began a series called "Six Siblings." Part One was about FTDNA's "ancientOrigins" and "my Origins," neither of which I put much stock in. Parts Two and Three followed and dealt with comparisons among the siblings' matches. I intended Part Four to be about our second cousins and our matches with them, but we have a second cousin in a new line whose test results keep being postponed, so I have busied myself with other things.

In the meantime, FTDNA came out with a new version of myOrigins. An Enhanced Version. In their words:

This simple tool delivers both new and newly refined reference populations, including smaller trace-percentage results previously not available. These latest additions to our populations and the refinement of existing clusters ​provide a deeper look into your family history and what makes you…YOU.

Now the first thing everyone does is to look to see what has changed since the earlier version, both in the product and in our own results. If we happened to have saved our results. I wouldn't have saved mine, but as it happened I had just blogged about it in Six Siblings, so I had our results, though not those of other project members.

(Let me remind my readers that I do not take this analysis seriously and certainly do not give much credence to the precision, but as they say, it's for entertainment purposes.)

So what has changed? Well, here is how the results look. Mine, for instance. Can you spell B-O-R-I-N-G? It shows 91% Ashkenazi Jewish, 8% Asia Minor and <2% North African. 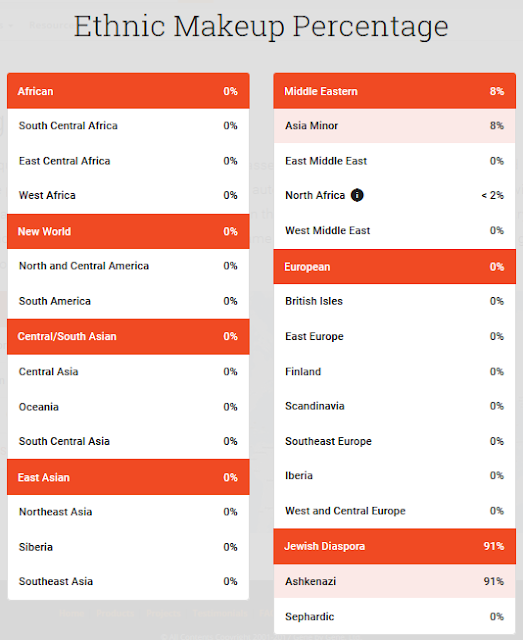 So 1% migrated from Western/Central Europe to Ashkenazi Jewish. No other changes.

But it is not quite so. Genetic genealogist Diahan Southard posted a chart explaining the differences in terminology and I shall assume she writes with authority.

"Not so" says Diahan's chart. What was previously Ashkenazi Diaspora was actually both Ashkenazi and Sephardic. (Why FTDNA spells only one has a "c" at the end? Who knows!) In any case, they think my 91% is all Ashkenazic and the Turkey-Azerbaijan and North Africa are meant to be just that.

FTDNA explains what the two Jewish groups are, but does not explain why they had previously been grouped together under the heading "Ashkenazi."

So here are the results for the six siblings, again omitting those categories where we have no representation at all. (We appear in birth order.) 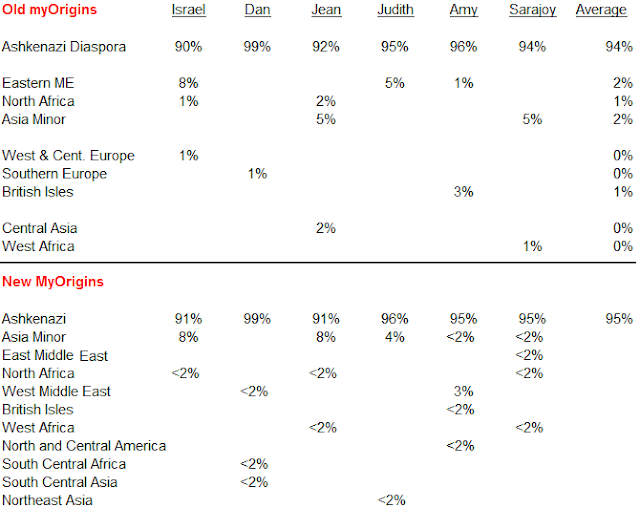 In short, BORING!
For comparison, I looked at the myOrigins for our two closest relatives, my father's sister and brother. Aunt Betty is 99% Ashkenazi and Uncle Bob is 97%, with a few fragments which are not attributed to Asia Minor.

I was not going to write about this at all, but it has been the subject of a lot of talk on genetic genealogy social media. Besides, there have been two other new developments that I have found even less interesting. (Not to disparage other population groups who may have results of significance.

One is the new MtDNA analysis. The company writes


We’re excited to announce the release of mtDNA Build 17, the most up-to-date scientific understanding of the human genome, haplogroups and branches of the mitochondrial DNA haplotree.

As a result of these updates and enhancements—the most advanced available for tracing your direct maternal lineage—some customers may see a change to their existing mtDNA haplogroup. This simply means that in applying the latest research, we are able to further refine your mtDNA haplogroup designation, giving you even more anthropological insight into your maternal genetic ancestry.

My MtDNA has nothing new.

The other is the Ancestry Genetic Communities which they describe as follows:
This new advancement is only possible through the millions of AncestryDNA members around the world who have chosen to participate in the Research Project as well as the massive collection of family trees, only available on Ancestry. The science behind this feature was recently published in one of the prominent scientific journals Nature Communications...
At launch there will be over 300 Genetic Communities all around the world to go and explore, with many more on the horizon. We will compare you to all of them and list the ones you have a connection to based on your DNA. These Genetic Communities dot the globe and are often more specific than what’s possible to discover with an ethnicity estimate, providing a more recent connection to your past.


What they told me? This.

Exactly what I expected? By no means. But interesting? No. About what I would expect from someone who is 91% Ashkenazi.

Housekeeping notes
Actually, as far as housekeeping goes, pre-Passover is nearly complete. Cooking and such remains to be done before the seder Monday evening. (Remember, we have only one here in Israel.)

My pre-holiday letters to the Hebrew-speaking Pikholz descendants have been mailed. The email summaries and holiday greetings will probably go out today (Sunday).