We do not know her place in the family structure
Only that she was one of at least 602 Pikholz descendants and spouses
murdered in the Holocaust by the Nazis
and their colllaborators from the other nations of Europe.
And that she was the only known daughter of

Gusta's letter was mailed in an envelope addressed simply "Sochnut Jerusalemme Palestina."
("Sochnut" means agency and refers to the Jewish Agency, which handles immigration to this day.) 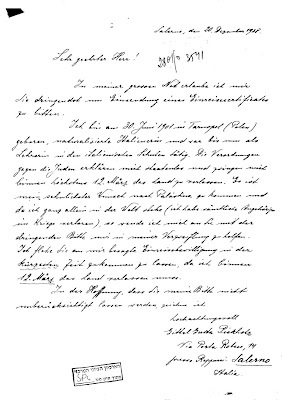 In my great need, permit me to urgently request the sending of a entry certificate.

I was born in Tarnopol, Poland on June 30, 1901, naturalized Italian and was until now a teacher in the Italian city of Satiz. The decress against Jews has declared me homeless and force me to leave the country by March 12 at the latest. It is my greatest wish to go to Palestine and because I am alone in the world ( I have lost all my relatives in the war), so I turn to you with the urgent request to help me in my despair. I implore you to allow me to come in a short time for the aforementioned entry certificate, because I must leave the country no later than March 12.

In the hope that you will consider my request, I sign
yours respectfully 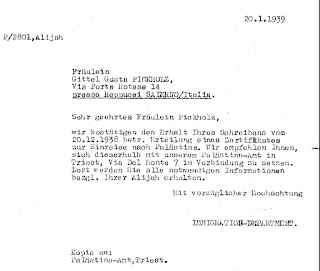 Dear much honored Miss Pickholz,
We acknowledge your writings of Dec 20 1938 regarding obtaining a certificate for traveling into Palestine.

Therefore, we suggest that you contact our Palestine Office in Trieste, Via Del Monte 7.

There you will obtain the important information regarding your Aliya.


There is no further correspondence in the file and we have no idea what transpired in Gusta's life until late 1943.

However, one of our US family members found a website with a description in Italian of the deportation of sixty-four Jews from Sondrio, in northern Italy to Auschwitz.  This site includes the name of Augusta Pickholz, who is the same as Gusta / Gittel.  This websire (http://www.shalom.it/2.01/Q.html) is no longer active.)

Following is a translation from Italian (translated by Miriam Maimouni) of parts of a letter I received from Ferrucio Scala, who witnessed the deportation from Sondrio and is responsible for the information in the above website.

"Dear Israel,
thank you for having written me. However, I don't know the English language. My son Andrea translated it for me. I am answering you in Italian. If you want to avoid looking around for a translator, get in touch with Herman Marek. You can reach him through GHETTO FIGHTERS' HOUSE MUSEUM - Lohamei Haghetaot M.P. Western Galilee 25220 - Israel. He knows Italian very well and also writes it. He takes care of the Museum to the Memory of the Children. In order to answer adequately to your straight questions, my response will have to be a bit more lengthy. And that's good. The Jews in Valtellina? There were two periods. The first from Sept 29, 1941 to Oct 25, 1943. It is in this period that, due to the laws on race of 1938, the Italian army (as far as the APRICA in Valtellina is concerned) takes numerous families in the Balkan region away from the Germans and the Croatian Ustasha. On March 3, 1943, the Jews in APRICA count about 300 altogether. This is what a note of the Interior Ministry, Head of Police, to the Interior Ministry, says. Subject: The Jews interned in APRICA. The number, starting with 144 in 1941, reached 215, and then 272, and finally approached 300 in 1943. The above-mentioned letter reveals that it was almost impossible to get the number in Aprica reduced.  All other places in Italy did not admit any more arrivals. It says: "In the province of SONDRIO, and to be exact, in the town of APRICA, about 300 Jews of Balcan origin have been interned for some time. Part of them have been permitted officially to reside in Sondrio because they had problems with the mountain climate. It is pointed out that the afore-mentioned Jews urgently need to be interned somewhere else, for the following reasons:

(basically, it was feared that there would be some contact of the antifascist ideas of the Jews with the natives or villagers or refugees [evacuated persons] in the plains of Lombardy. Also eventual contacts with "the community of Aprica [which is] too close to Switzerland and therefore it is not commendable to leave the Jews there who at any moment may take up contacts with elements beyond the border, possibly through third
parties." Fear of the intelligence, and finally: "The Jews in Aprica stir the miscontent of the local population because they acquire the rationed goods at exorbitant prices." (sic!) We know that among the 272 Jews in Aprica, 218 were considered poor. The administrative department of the local police headquarters of Sondrio, paid out 8 Lire daily to the head of family, 4 for the wife, and 3 for every child, so they were living in abundance! Plus 50 Lire monthly for rent or lodging. The Jews were lodged in private houses or in guesthouses/hotels: the Mirafiori, the San Pietro, the Aprica, and a co-operative kitchen in the Albergo Posta in the neighborhood of MAVIGNA. Salomon Mosic was the elected representative of those interned in Aprica. Riccardo Kohn was the president of the Palestine Office of Zagabria, and then, in Switzerland, the director of administration of an institution for young Zionists at Bex near the valley of Rodano. These two and a third [person] were the elected heads, and they dealt with the authorities of Sondrio in whatever problems there were. Who watched over the Jews of Aprica? Two officers of the carabinieri: Luigi Tosetti, who became head of the partisan detachment in Valle Camonica. He died March 19, 1945 through the explosion of a hand grenade. The other, Bruno Pilat, finished in Mauthausen. Friendly guardians. Let us not forget that some Jews in Sondrio were put up in rented houses. Aprica is situated at 1170 meters above sea-level. This does not cause any problem to those suffering from high-altitude syndrom. It is a large former pasture in the shape of a half-curve, vast and airy. It is the passage from the province of Sondrio to that of Brescia. If one continues from there, one arrives at the Tonale Pass, and finally in Trentino. From Aprica one can walk on non-dangerous paths  through the shrubbery to arrive there, one crosses the national road and can climb up further, either by Villa di Tirano (Lughina Pass) or, slightly to the south, through Bianzone-La Bratte-Baita Campione, the Anzana Pass (2200 m), and descend to the Salent valley which leads to Campascio in the Poschavio valley. Sept 9, 1943 - Mosic and Khon write a plea to the Police headquarters of Sondrio. They are asking for all of them to be permitted to leave Aprica. A nice good-bye letter. The Police writes to the Interior Ministry and submits the request (absolutely no negative implication by the Police president). The evening of Sept 8."

...................... ISRAEL, THIS IS A LENGTHY ACCOUNT OF ALL THAT HAPPENED DURING THIS TIME BUT NO NAMES ARE MENTIONED. THIS MAN HAS GONE
THRU GREAT TROUBLE + EFFORT TO PUT IT ALL TOGETHER FOR YOU. IT IS PROBABLY A SUMMARY OF HIS BOOK (THIS IS MY ASSUMPTION) BUT WITH PAINSTAKING DETAIL.

I SHALL LEAVE OUT MOST OF PAGE 4 AND ALL OF PAGE 5 PLUS HALF OF PAGE 6.
THERE HE WRITES:

"That is the story of what followed. And the Jews? Shadows. Legends. I wanted to bring the shadows to light and finish with the legends. I am very sorry, but I know nothing much about Augusta Pickholz. The Memory Book of Liliana Picciotto Fargion mentions her on page 474: 'Pickholz Augusta, born in Tarnopol in Poland on 30-6-1901. Last residence recorded: SONDRIO. Imprisoned in the prison of Milan. Deported from Milan to Auschwitz on 30-1-1944. Number doubtful. Died there and date unknown: Document 1a Transport 06. (Augusta Pickholz, judging by the characteristics of Transport 06, must have been arrested while trying to get to Switzerland.)"

PAGE SEVEN:
"Dear Israel, I am rich in time and patience. My relations with the Jews started in November 1942 when I was in hospital for lethal diphtheria. Chances were I would not survive. When I came to, I saw a young woman who stood by the door. She wore a beautiful blue night-gown, had black hair, and she smiled at me. My mother told me: 'She is Jewish". Indeed. 59 years have passed, but after researching like mad I know today that her name was Amendola Giuseppina, born in Kenosha (Wisconsin, USA) on March 17, 1917 - the daughter of Salvatore and Larancio Maria. She was  described as North-American Aryan in the list of refugees of Sept 10, 1943. She was confined to Aprica. That sight was real. But the register of the hospital gave three entries and three discharges. First as born in Aprica, and resident of Aprica. Then born in Canoscia Wiri, then born in Canoscia
[Kenosha - IP] Viscaya [Basque region]. I got bogged down in vain researches in the region of Bilbao in the Basque region. All this as a consequence of errors in the entries, of the malcomprehension of languages and lack of knowledge. Probably Guiseppina was the daughter of Italian emigrants, in a town famous for its canned food, and 150 km from Chicago. How come she was together with Kroats, Serbs and Jews from the Balkans? We shall never know. I have engaged in a long voyage into the past. This is why I remain watchful so it will not happen again. Best regards, Ferruccio Scala "

Miriam writes:
THIS MUST BE A VERY NICE MAN. HE SURE DESERVES A WARM THANKYOU... ( I
apologize immediately for meddling! but I feel very touched by the way, and what, he writes) ON THE LAST PAGE HE DESCRIBES THE PHOTOGRAPHS, AND ASKS YOU TO MAKE THEM KNOWN/HAND THEM TO THE APPROPRIATE PLACES IN ISRAEL AND AMERICA SAYING "WHO KNOWS..." THE PHOTOS ARE ALL FROM THE MEMORIAL
CEREMONY - ON PHOTOS 2 and 6 YOU SEE FERRUCCIO SCALA (THE ONE WITH THE YELLOW JACKETT). PHOTO 7 SHOWS A GUY AGED 86 NOW WHO WROTE A DIARY IN THE PERIOD IN QUESTION.
Posted by IsraelP at 5:59 PM