Last summer at the IAJGS Conference in Seattle, I gave a new presentation called GEDmatch.com’s Lazarus Tool As It Applies to Two Kinds of Endogamy. It was well-received but I felt it needed some changes. I also received a few more kits that I had to add. I am beginning to work on those for the Orlando Conference in July. This is the summary I submitted with my proposal.


Lazarus is a tool offered by GEDmatch.com, which can create a partial genome of a person based on autosomal test results of descendants on one hand and non-descendant relatives on the other. This recreated kit can be compared to other kits in order to help determine and clarify relationships.
But for endogamous families, this is more complicated, especially when you consider that there are two distinct types of endogamy.
This presentation will address the two types of endogamy and the way to best use Lazarus while reducing "contaminated" input inadvertently introduced due to multiple relationships. It will also address the use of Lazarus as a tool for DNA analysis.
The presentation – much of which is based on the speaker's recently published book "ENDOGAMY: One Family, One People" – will use examples from the single-surname Pikholz Project.

The talk will take place on Tuesday 25 July at 2 PM in a room called "Osprey 2" and will be introduced by Mindie Kaplan. The handouts are mostly tree charts so people will be able to follow the family structure.

The kit I am most interested in recreating in this presentation is my great-grandfather Hersch Pikholz (~1853-1931), but along the way, I shall recreate kits for my father, my great-grandmother and Hersch's mother Rivka Feige, with a nod to my grandfather as well.

It is the kit of my great-grandmother, Jutte Leah Kwoczka (~1855-1926), Hersch Pikholz' wife, which I wish to comment upon here. We have Family Finder tests for fifteen of her descendants - three grandchildren and twelve great-grandchildren.

Those fifteen descendants should be fine as Group 1*. (Actually we have two more great-grandchildren, but I am not using their tests as their parents are already included.) 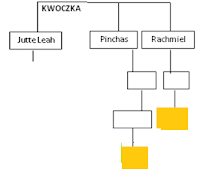 For Group 2*, I used the grandson of one of Jutte Leah's brothers and a great-grandson of the other. That gave me a Lazarus kit for Jutte Leah of 1490 cM, not quite enough for GEDmatch to make it useful for one-to-many comparisons to other people. 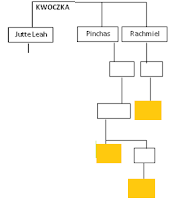 I figured I should be able to make up the missing 10 cM and then some by testing a great-great-grandson of Jutte Leah's brother Pinchas.

The "and then some" turned out to be more than one hundred cM and the new kit was 1816 cM, more than enough for batching.

Finally - well not quite finally - this week I received Family Finder results for a sister of the great-great-grandson that I had added previously, giving me a fourth person in Group 2. The total cM went up by another 16 cM, for a total of 1833 cM. Not very much gained there. 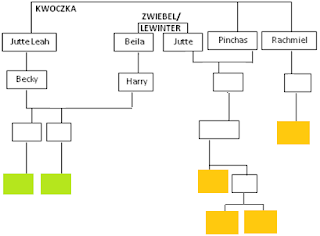 But there are definitely false matches in that total. Aunt Becky's husband, Uncle Harry, is the son of Pinchas Kwoczka's wife's sister.

That means that Aunt Becky's two granddaughters share Zwiebel/Lewinter DNA with the three descendants of Pinchas - DNA which has nothing at all to do with Jutte Leah Kwoczka and should not (MUST NOT) be included in her Lazarus kit.

So I had no choice but to remove the granddaughters of Aunt Becky and Uncle Harry, leaving thirteen members of Group 1*. This reduced the size of Jutte Leah's kit to 1644 cM. The irrelevant Zwiebel/Lewinter DNA was 189 cM, a very significant amount.

Please note that the last day of Passover begins this evening (Sunday) - the last two days if you are still in exile. I'll not be reacting to comments made during the holiday until my Wednesday morning.

* In fact, GEDmatch gives you only slots for ten kits in Group 1. But I have more than that in this case, so I had to reverse Group1 1 and Group 2. That doesn't matter to the computation.
Posted by IsraelP at 5:58 AM