Less than three months ago we found the descendants of my mother's mother's missing sister Alta Rosenbloom Kaplan, who had remained in Russia when the others went to America. I wrote about this here, then again here when I met my second cousin Lydia in Columbus Ohio. 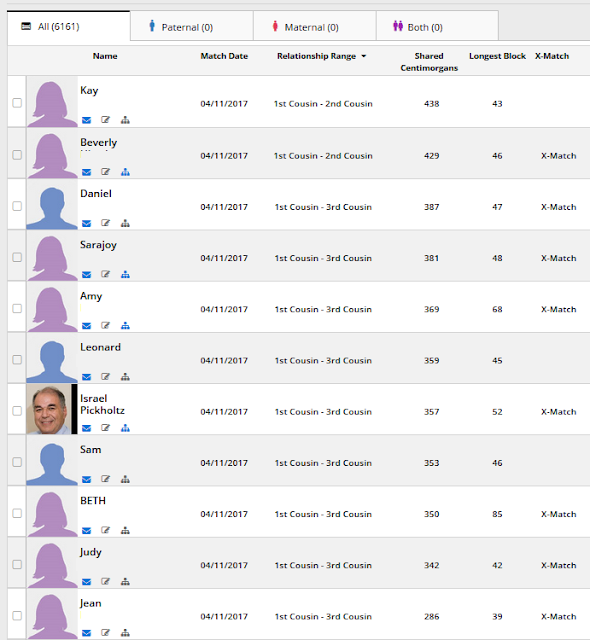 The ISOGG table says that second cousins should share about 212.5 cM and Blaine Bettinger's Shared cM Project (at that same link) has that about ten percent higher, so Lydia's numbers are very high. With one exception, all her second cousin matches are upwards of 342 cM and two are over 420 cM. It's worth noting that those two are not from just one of Alta's siblings - Kay is from my grandmother and Beverly is from Uncle Hymen.

Here is the whole set of matches for the twelve second cousins.

It is very tempting to say that this is a normal result of structural endogamy, the kind that affects all Jewish families, especially those who come from the same areas. But that would be wrong. 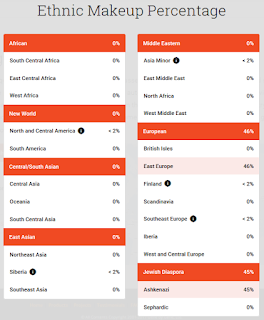 Lydia's mother is not Jewish. Her matches with her second cousins should not be this large. They should certainly not be larger than the matches between the grandchildren of Sarah and Hymen. And lest anyone suggest that Lydia's non-Jewish mother may have Jewish roots, let's look at her myOrigins.

Lydia is estimated to be 45% Ashkenazi Jewish and 46% East Europe non-Jewish, plus a few fragments. This is what we would expect from a child of a Jew and a non-Jew. So no endogamy between her parents.

But there is more. Lydia's closest second cousin match is Kay, who also has Jewish DNA from only one parent. Kay's myOrigins shows 44% Ashkenazi Jewish, 6% Asia Minor and 50% West and Central Europe. No relation between her parents either. But Kay and Lydia share 438 cM!

So why are Lydia's second cousin matches nearly indistinguishable from the rest of the Rosenbloom second cousins? It seems to me that Lydia's grandparents Alta Rosenbloom and Berl (or Baruch, there is some debate) Kaplan must have been closely related. Even first cousins. That would give Lydia an extra dose of DNA to be shared by the second cousins.

As it happens, we can test this theory. In two weeks, on my Hungary/Slovakia trip, I'll be stopping in Nuremberg to see Lydia's first cousin Inna. And to take some of her DNA. Both of Inna's parents are Jewish so her matches with the second cousins should be significantly greater than Lydia's, benefitting from both the structural endogamy that Lydia lacks and the personal endogamy of related grandparents.

And if my summer plans work out, I will stop in Moscow on my way to Orlando, to see another first cousin of Lydia and Inna. That would be Lea and she too is Jewish from all directions. So if Lea and Inna match the second cousins significantly more than does Lydia, I shall see that as strong evidence that Alta and Berl are closely related. Whether we can use that to get anywhere is another question. 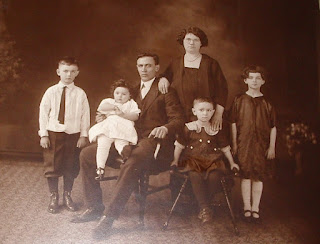 Here she is with her husband and first four children. My mother, the youngest, was not yet born. Aunt Ethel and Uncle George are on the right.

The picture was taken in Vandergrift Pennsylvania.
Posted by IsraelP at 9:17 AM