Dear Cousin Ethel, I've been working on what you wanted.

I am still waiting for confirmation, but I am pretty sure I have done at least some of what you asked. A bit later than I'd have hoped, considering that I have been saying kaddish for you for the last six months. But nonetheless.

This is what we knew until recently of our Rosenbloom family.

Here is a chart showing the five children of your grandparents (they are in red), the two children that your grandfather had with his second wife and, over on the far right, the two children that the second wife had with her first husband. (I learned the names Abraham and Bela Resnikov a few years ago. And of course, no one knows what became of Jack Bandis - just that your father had some contact with him early on in the US.)

For convenience, I marked in green the ones who went to America. And on the left, I put the four children of the older sister Alta Kaplan. All we know about them is that Jakov and one other son each had a daughter before Stalin cut off communication.

There is one other person unaccounted for in that generation, which would be the half-sister Mera (your father always said "Mary")  who was a physician in Moscow. The half-brother Moshe Herschel was killed just after the end of WWI and your brother Maurice is named for him.

Those old Yiddish letters that you gave me years ago include one from Mera dated 13 October 1929, asking your father to send her one of those new devices with tubes you put in your ears, to help hear a person breathing. She wrote her mailing address in Cyrillic at the end of the letter, so we know where she was living in Moscow in 1929. She signed her name "M. D. Goldina." That is the only thing we have telling us her married name. By the time we spoke to your father, he did not remember the name "Goldin."

I made some unsuccessful attempts over the years to try to find Dr. Mera Goldina, but did not have anything to show for it. I figured that perhaps a medical association might have something, but nothing came of those efforts. I posted on discussion groups from time to time, but mostly moved on to other things.

My friend Logan Kleinwaks has a site where he posts all kinds of eastern European directories, searchable by OCR (that's optical character recognition, a way to search the printed page), and recently he's put up Moscow directories for the 1930s, so I decided to have a look. First I wanted to make sure I had the Cyrillic correct, so I posted the name and address on Schelly Talalai Dardashti's Tracing The Tribe discussion group on Facebook, asking for help from Russian speakers. One thing led to another and Luba Tabolova (a native Russian speaker living in the US) mentioned the "D." as a patronymic.

As you may know, Russians use the father's name as the basis for a middle name. I realized that she must have been using her father's second name David rather than Israel or Srul - perhaps because it sounded less obviously Jewish. 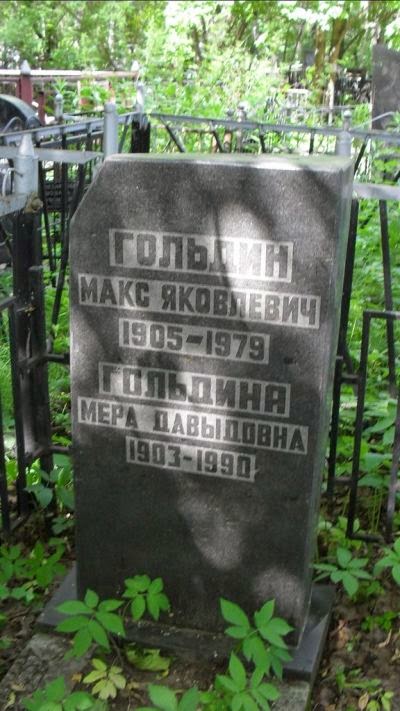 So, thinking that Mera might have remained in Moscow, Luba did a cemetery search for "Mera Davidovna Goldina" and she found a grave in the Malakhovskoye Cemetery in Moscow with precisely that name and the years 1903-1990. That means she died five years after your father. But is it the right person?

The same tombstone named Max Yankelovich Goldin 1905-1979, presumably her husband. We had never seen her husband's name before.

I have no idea how long this photograph has been available online. Perhaps recently or perhaps from the time that you could have actually seen it.

We are still trying to figure out how to confirm that this is your father's half-sister. Luba is trying to get additional information from the cemetery.  She also found a phone number for a Felix Goldin whose father is Max who is about eighty years old. Problem is, the phone number is not valid. but we are working on it.


a) he is the son of the couple in the cemetery
b) the Mera Goldin in the cemetery is indeed "ours"
c) perhaps that he knows something about the Kaplans.

But we couldn't make contact. Then last week, I checked my new Family Finder DNA matches and found this: 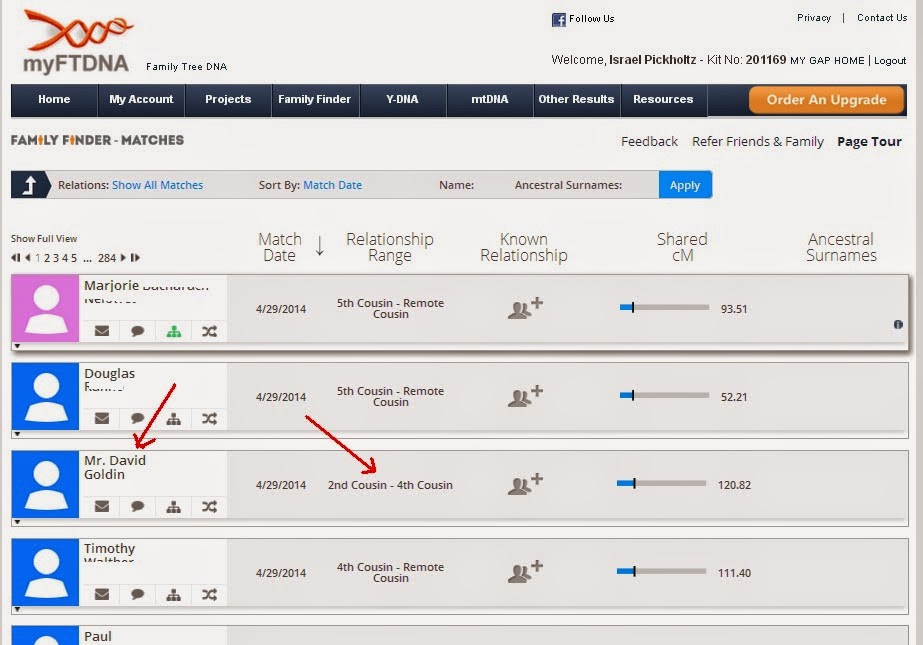 David Goldin. A second-to-fourth cousin. David as in Israel David, Mera's father? If he is Mera's grandson, he would be my half-second cousin. Is this perfect or what? I emailed him.

I see that we have a close DNA match - second-fourth cousin.

My grandmother had a half-sister named Mera Goldin who was a physician
in Moscow. Our last conatct with her was in 1929.

Is it possible after all these years that this is your family? If so please tell me
where you are and how and when I can reach you by phone.

A day later, I received a note from a man in Massachusetts, a nephew of David Goldin. David tested at his request but asked that he not have to deal with inquiries such as mine. He didn't say how old David is, but David's father (1910-1983) was born in Greenport NY and lived his whole life there. David's grandfather went to the US from Poland. So David is clearly neither a son of grandson of our Mera.

The nephew gave me David mother's and grandmothers' maiden names and they don't mean anything to me.

Still, the DNA says that David Goldin is a second-third cousin, so the nephew will give me some additional information on those lines.

No one on my mother's side has done DNA testing, so I cannot see if he matches that side.

Luba will continue trying to get information from the cemetery and to make contact with Felix, so I am still hoping we have Mera's grave, even if we don't have any descendants yet.

I'll let you know when we know more.

PS - Funny thing. I was speaking to Beverly on the phone and I told her that I thought I had found the missing sister, the doctor. Her first reaction was "Aunt Ethel would be really happy."