Leading into the month of Sivan

The reunification of Jerusalem - 28 Iyyar
During the lifetimes of many of us, we were blessed to see the reunification of Jerusalem. During the nineteen year occupation of the Old City, the Mount of Olives and other significant places of Jewish heritage, the Jordanian Arabs destroyed synagogues, other buildings and grave sites, in addition to preventing Jews from approaching these places. (My apologies for the quality of these photos, particularly the ink that bled through.)

And the Kotel Plaza was not the great open space we recognize from the last forty-five years.  There was work to be done.

The archealogy on the southern end of the Temple Mount didn't appear ex-nihilo either.

There were the places where residents of the Old City has been murdered and buried in mass graves - in what was then and is now "the Jewish Quarter." As though there can be any other quarter. 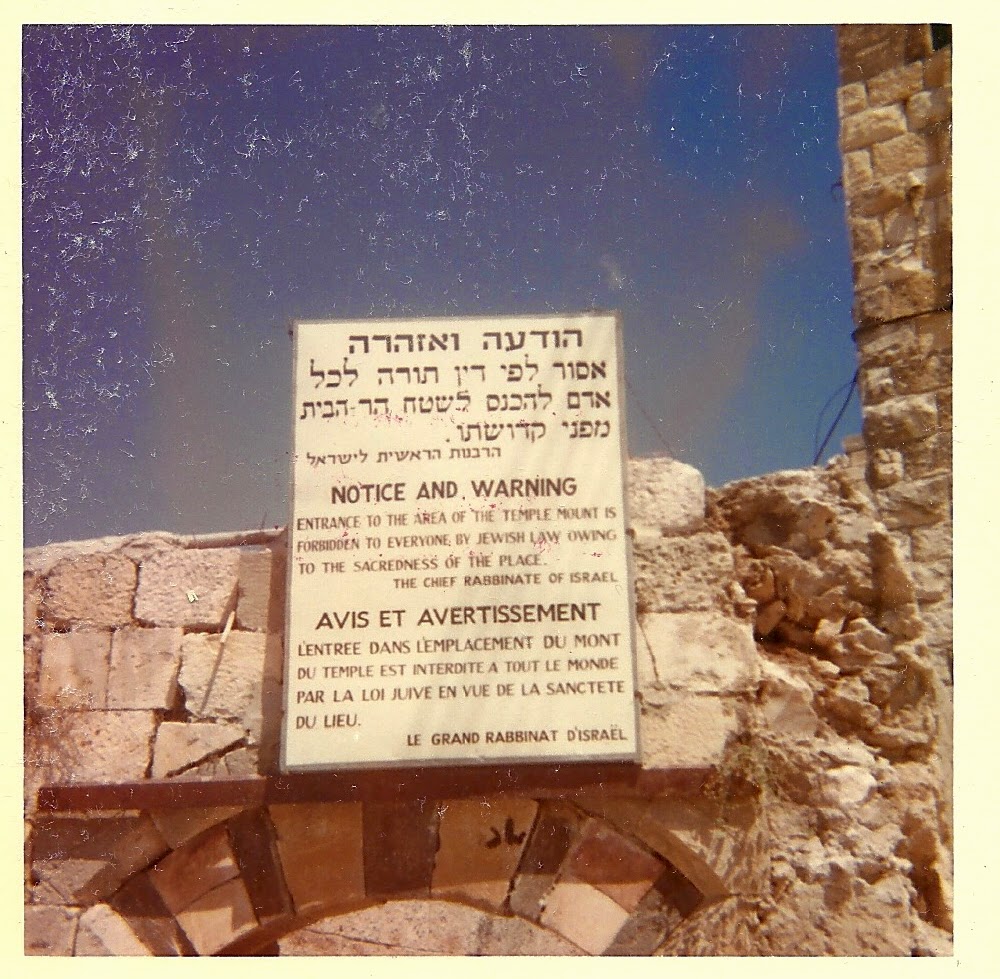 I have been using the word "reunification," not "liberation," for as long as we cannot go up to the Temple Mount, neither it nor we are liberated.

Above the Kotel on the right, the Chief Rabbinate says that it is forbidden to tread on the holy ground, even in the areas that clearly should not be forbidden. (We are reminded from time to time why the Law of Unintended Consequences is sometimes a good thing.)

But back then, we could get close enough to take pictures through windows that open onto the Temple Mount itself.

Whenever I took people into the Old City back then, we would stop and see how it had looked before the Six Day War. We could not get a better view than this.


A word about united Jerusalem vs what they write in the papers. We waited Thursday night at a stoplight up near French Hill. On the island waiting for the light to change, there were two hareidi boys, maybe ten years old, with their backpacks, no doubt on the way home from school. On the same island were three Arab men, forty-ish, probably also on their way home. Sharing the same small traffic island. No one thought a thing of it. 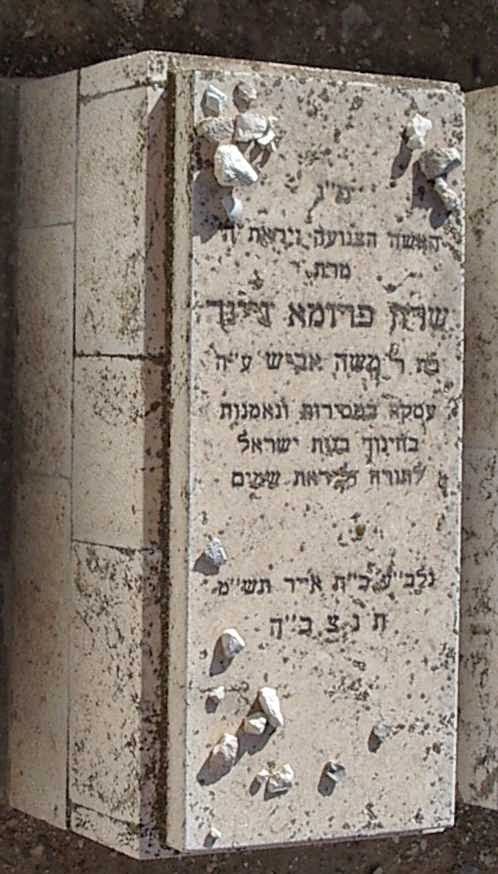 I heard a long interview last week with Steven Pressfield on his new book The Lion's Gate, about the Six Day War, with a great deal about the reunification of Jerusalem. Some lucky family member is going to get a copy from me.

I have written here and here about two non-family members who were buried on the Mount of Olives and whose graves were desecrated during the Jordanian occupation.

We also have a family member buried there - but not from that period. My wife's second cousin Sheila (Sarah Fruma) Goldson Weiner, born in Cincinnati, made aliyah with her husband and four children, had a fifth here in Jerusalem and died on Yom Yerushalayim thirty-four years ago. She was forty-one. I have lost count of her grandchildren, but there have been over thirty for some time. (Her husband is from Memphis and is related to a third cousin of mine who, last I knew, lived in Tuscaloosa.)

We pray for our children - 29 Iyyar
Rabbi Yeshayahu HaLevi Horowitz, born 1558 in Prague, served as a rabbi in a number of communities in Europe, eventually returning to Prague. After his wife died in 1620, he made aliyah to Jerusalem, where he wrote his seminal work "Shnei Luhot HaBerit" and he became known as the Shelah, the acronym of his book. This particular work - which was meant as instructions to his children - was published by his son some years after his 1630 death. The Shelah left Jerusalem after he and other community leaders were jailed for ransom, and lived in Zefat befiore moving to Teverya, where he died. He is buried in the same compound as the Rambam. 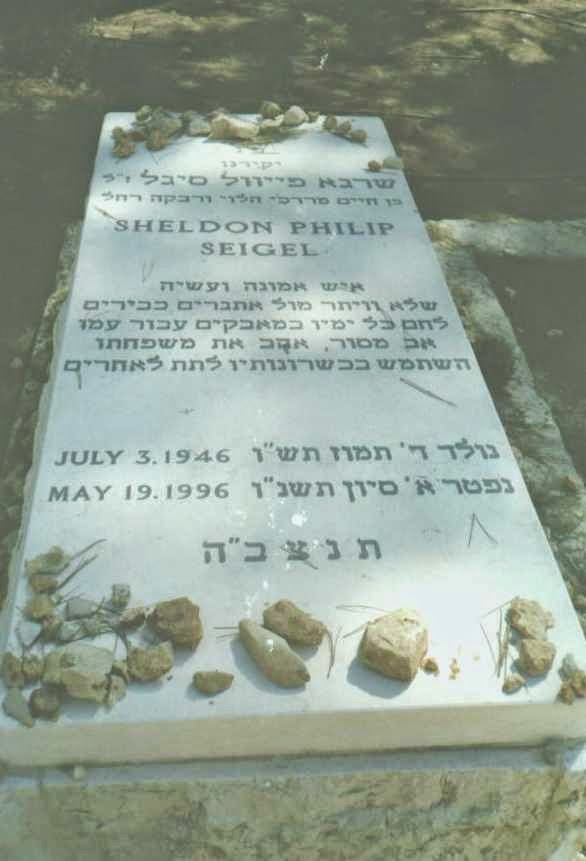 His prayer, which he instructed should be said on 29 Iyyar, the day before the beginning of Sivan, the month we receive the Torah, can be found (with translation) here.

Rosh Hodesh Sivan
We have three Pikholz yahrzeits on the first of Sivan, all buried here in Israel. Two are in Holon - one from Skalat and one, a Pikholz spouse, from Rozdol and this one on the right who lived in Efrat and is buried in Kefar Etzion.

I discussed Hevron here a couple of years ago, including its capture in the Six Day War by the Chief IDF Chaplain, Rav Shlomo Goren.

For a few years, before we moved to Jerusalem, Devir and I used to go to Hevron for a sunrise minyan every time Rosh Hodesh would fall on a Friday. Then for awhile we went every Rosh Hodesh.

Devir has been after me to go, as we have not been there is quite awhile and we plan to do so this week.

It will give me an opportunity to update my Hevron Cemetery website..

Houskeeping notes
The panel discussion I am participating in at the Conference in Salt Lake City has been moved to Monday at 4:45 PM.

My own talk is at 9 AM Wednesday and I have just learned that I have been assigned a room with a seating capacity of 480. Methinks someone is being optimistic. My good friend Renee Steinig has agreed to introduce me, as she did three years ago in Washington DC.

The Conference website has a link for a live stream of "Over 50 of the best conference programs," but they haven't announce which those would be. I don't know if being assigned a room for 480 people qualifies as "of the best." We'll find out. Registration for this is $149.
Posted by IsraelP at 7:30 AM