A Party on Chromosome 6

A couple of weeks ago, I received an email from Dr. Steven Turner in the United States telling me that he had some DNA matches with a number of people in our DNA project. At first, he thought he matched eight Pikholz descendants.  I gave him my standard response about our project's being about how to connect our own families with one another, not so much about connecting with non-Pikholz from the pre-surname period two hundred-odd years ago. And I told him that if he matches more than half of our twenty-seven Pikholz testees, we could talk.


That twenty-seven is a new number. We just received results for my double second 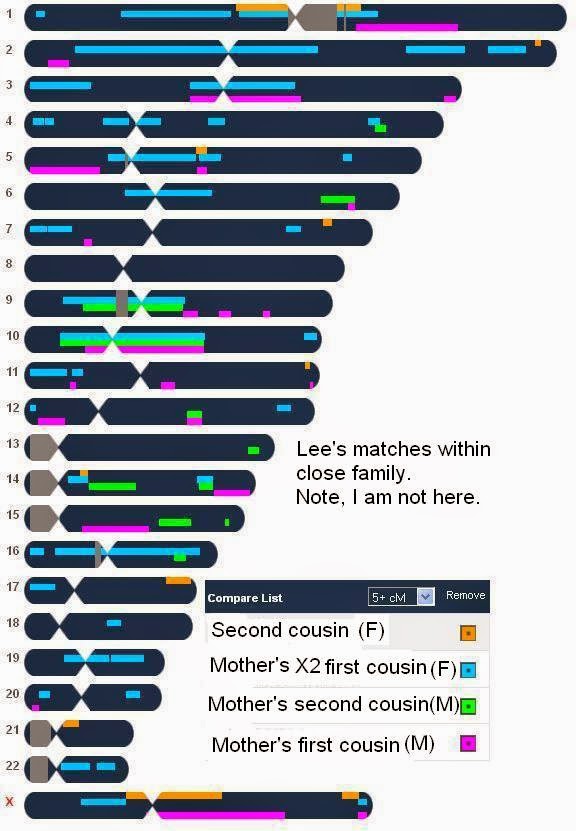 cousin, Lee. Our grandfathers are brothers and our grandmothers are sisters. .I really wanted his mother to test, but it didn't work out. Lee ought to match the other Pikholz very much as I do, but that is not the case at all.


I have thirteen matches within the Pikholz group and Lee has eighteen. In additioon, we have a documented fifth cousin named Cyndi on our grandmothers' side, whom I match accordingly. But Lee matches her much closer - probably due to something on his father's side. I have not gone back to check how Lee matches with the non-Pikholz I have discussed here earlier, but for the newest ones, his place in the DNA analysis is prominent.

Yet another reason that we should test as many people as we can and not just say "Well, my third cousin already tested."

he is a match for fifteen Pikholz descendants. That put him across my threshold of 50% and I had a closer look.

He also matches both my Kwoczka cousins, descendants of the brothers of my great-grandmother. In fact, one of those, Pinchas, is better than all of Steve's Pikholz matches but one.

He joined our surname project at FTDNA, making it easier for me to examine his data. He added his mother to the project as well. She matches fourteen Pikholz, and not all the same as Steve. So clearly he has matches with us both on his mother's side and on his father's side.  (Steve's father's family is from Rohatyn, which is between Rozdol and Skalat, so there is some geographic logic to that.)

So I ran Steve's results on a chromosome browser against all his Pikholz matches, as well as his matches within the non-Pikholz who match most of us. There were a number of very interesting matches, but the match on chromosome #6 was remarkable.

Look at his matches with our group on chromosome #6 between the two vertical red lines on the left. He matches nine Pikholz (the ones whose names are underlined in red) and twelve non-Pikholz. He also has four significant matches towards the center of the chromosome, between the blue vertical lines. Now I have to figure out how to do more with those twenty-one matches on the left.

Well, the one thing I know how to do is to look at those same twenty-one people against Steve's mother. Some of them do not match at all and I omitted them from the comparison below.

The whole group on the left has all but disappeared. Those twenty-one matches of Steve's do not come from his mother. But the large matches towards the center, with Terry and Herb, together with the smaller match with Vladimir, are still there, so those must be matches on Steve's mother's side. Plus a match with Pinchas in the same place, that Steve didn't have. 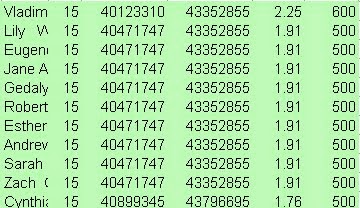 On chromosome #10 on the left, there are six areas with interesting matches, some of which are known close relatives (Marla and Hartley in the third and fourth segments are siblings as are Douglas and Pamela in the fifth), but in general, most are people whom we do not know to be related either to us or to each other. But obviously they are. Probably in the 1700s.

The experts tell us to ignore the small matches, the ones with fewer than four or five or eight centiMorgans (depends which expert you ask). The small segments are supposed Identical By State (IBS) which means they are just left over from some really ancient ancestor and not significant for us today. The larger more interesting matches are said to be Identical By Descent (IBD) which means they match because of some relatively recent, theoretically knowable, mutual ancestor.

But look at the matches on chromosome #15 in green, above. (Or below or wherever Blogger has decided to put them today.) These are all very small matches and nine of the eleven are perfect matches. None of the eleven are as close to one another as second cousins. So I take issue with the IBS/IBD distinction especially when a large group share that small match. I mean, it had to come from somewhere, no? And if it were ancient, would it really have preserved itself in so many distantly related descendants - known to be related by other parts of their DNA?

I really have to learn more about this analysis business. Eleven weeks until the course at GRIPitt.