The Gabriels, The Breines And The Etie Goldes

The Budapest records
Last week, the incomparable Lara Diamond had a blog post abut Hungarian Civil Records on FamilySearch and I figured I should have a look. Before I got to it, she sent me links to nineteen records which mention people named Pikholz, with one spelling or another. There were two births, seven deaths and ten marriages. (Elizabeth Long helped out with deciphering some of these records.)

Two births, two deaths and seven marriages are people I already knew from one particular Pikholz family that lived on Nyar Street - Mozes and his wife Lifsche Kornberg and their children. They are part of a family that I call the IF3 family from Rozdol, where Mozes was born. (Lifsche was from Tarnopol and I have long wondered how they met.) I am in touch with one descendant of that family group and she has even done a DNA test for my project.

Two other records are the marriage (1907) and death (1922) of Matel Lam, whose mother is a Rozdol Pikholz of unclear lineage. The marriage was recorded when Matel and her husband Feiwel Bohrer were in their forties.

Four death records and one marriage appeared to be from the non-Jewish Pikolcz family and I passed them on to Ron McComb who confirmed that they belong to his wife's family..

Etie Golde Gottlieb
I had never heard of Etie Golde Gottlieb, but I knew her parents Dawid Gottlieb and Regina (Rivka) Riss, my grandfather's half first cousin. Some of the Riss family were recorded as Pikholz and that is why the record showed up in Lara's search. 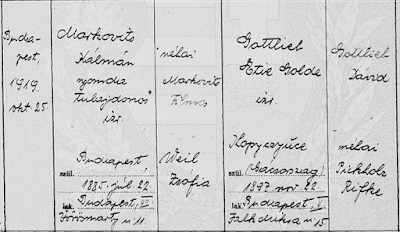 Dawid Gottlieb was born in Kopicienice and Regina in Kolaharowka (near Husiatyn). Three of the five children I already knew about had been born in Kopicienice and my guess was that the other two were as well. Of the five, two died in childhood, two went to Vienna where one survived WWII. The fifth ended up in Sweden and no one knows what happened to her. Dawid and Regina also lived in Vienna where they died before the War. 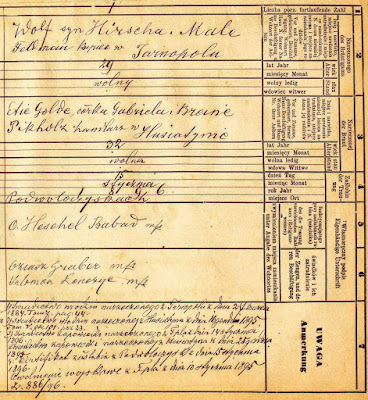 So now we have a sixth, this Etie Golde who was born in Kopicienice in 1897 and married in Budapest in 1919, four months after her mother died. Etie Golde's husband Kalman Markovits was from Budapest. I am in touch with several of the Riss cousins and no one ever mentioned this couple. Nor am I aware of any other connections between our Riss family and Budapest.

But the name Etie Golde was familiar to me in another context connected to Husiatyn. Some time ago, I found an 1896 marriage record in Podwoloczysk for Wolf Feldman of Tarnopol and Etie Golde Pikholz, age 32, the daughter of Gabriel and Breine of Husiatyn. It was not at all obvious whether Etie Golde's Pikholz parent was her father Gabriel or her mother Breine, but the record appeared to me to be in error.

I had no couple named Gabriel and Breine, but I did have father-daughter and grandfather-granddaughter pairings, both connected to Husiatyn. And one of them lived in Podwoloczysk. So although this marriage record appeared in some way wrong, I recorded it as is.

The Gabriels and the Breines

So these (on the right) are all the people we know in the Pikholz family represented in the 1896 Podwoloczysk marriage record. Gabriel and Breine, one of whom is a Pikholz, and their daughter Etie Golde, born about 1864.

We have seven Pikholz named Gabriel from the Skalat area. Etie Golde's father is the second one in the following Gabriel Chart. I cannot attribute the third and fifth in the Chart to specific families and in any case, they both died as infants. 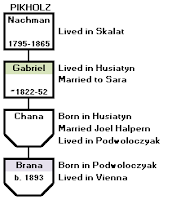 Nachman Pikholz (1795-1865) had a son Gabriel who had a granddaughter Brana. What's makes this family interesting here is that Brana's mother Chana (Gabriel's daughter) was born in Husiatyn and, after her marriage, lived in Podwoloczysk.

This is the first line in the Gabriel Chart above. The Gabriel on the last line is a grandson of this Gabriel, the son of Gabriel's son Moshe.

We might consider that if Gabriel's wife Sara died and he later married a Breine, he could have been the father of Etie Golde. But that is quite impossible as Gabriel died at age thirty in 1852, a dozen years before Etie Golde was born in about 1864. But the Husiatyn/Podwoloczysk angle remains intriguing. 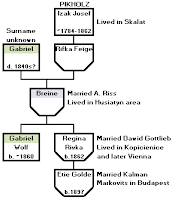 Now we have this new Etie Golde Gottlieb, who has a grandmother named Breine and an uncle and great-grandfather named Gabriel. (That Gabriel is married to a Pikholz, so does not appear on the Gabriel Chart himself.) Etie Golde's uncle is the fourth line of the Chart and another cousin is the sixth line.

Obviously Gabriel Wolf Riss, the uncle, cannot be the father of Etie Golde who married Wolf Feldman, because he would have been only abut four years old when she was born.

We run into many coincidences in genealogy, particularly with repeated naming patterns within a family. But this triple Gabriel-Breine occurrence has me flummoxed, even before we find the name Etie Golde in two of those cases. Yes, I know that the two Etie Goldes are thirty-three years apart, but that too may be one named for the other or both named for the same person. Or maybe it's just a coincidence.

In the meantime, I shall send this blog post to the surviving members of the Riss family. Perhaps they can shed some light.

It is my hope that this book will encourage and inspire other researchers of their European Jewish families and other endogamous populations to say “I can do this!”