Customers of Family Tree DNA are familiar with the match alerts we get from time to time, whether our own kits or the kits of members of our projects. 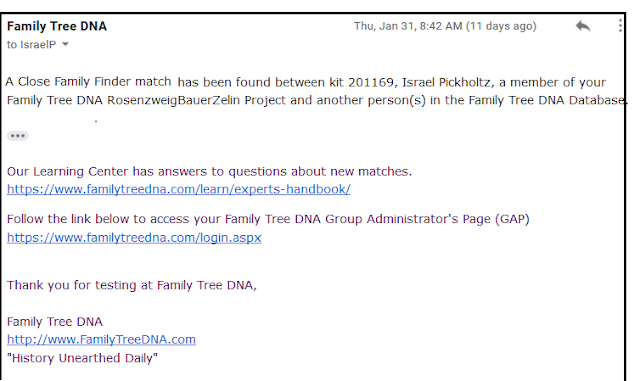 As I manage over a hundred kits, I am not about to stop what I am doing to look at these every time I receive one and in any case, I want to see how a match fits not just with me  but with other family members including those not close enough to warrant an alert. So nearly two years ago, I decided to look at all the new matches across my family members every few months. Then I write to the ones that look interesting and ask them to upload to GEDmatch to see if these matches are on shared segments.

Usually nothing much comes of it. Even when the DNA points to a very specific portion of my family, the match usually doesn't know any of my surnames or even my geography.

Last week I prepared the matches for the past four months and Sunday I sent out messages to the scores of matches who looked even a little bit promising. So let me tell you about Cynthia, who happens to be the wife of a fellow I actually know.

So I asked her to register for GEDmatch/Genesis and after it batched I looked at her top 20,000 matches using the Tier1 one-to-many search. She matches seventy-eight of my kits and I did some chromosome browsers to see how her matches line up in family groups. As usual I was looking for segments of over 10 centiMorgans with multiple meaningful matches with my families.

On chromosome 3, she matches seven of us - four of my parents' children, one first cousin and two second cousins, all pointing to my maternal grandfather's side. All we have there are the surnames Gordon and Kugel. And it was a small match anyway, so probably from a pre-1800 common ancestor.

Chromosome 5 showed a 12 cM match with a pair of second cousins in the Nachman Pikholz branch of the family. Not much with that either - but if Cynthia had the relevant surnames, it could have been nice.

Chromosome 6 had two segments of minor interest - one with some second and fourth Pikholz cousins of mine and another with one first cousin and three second cousins on my maternal grandmother's Rosenbloom side. Here too, we have no other surnames, but we do know that the
family lived in Borisov (Belarus) for at least half of the 1800s.

Chromosome 22 has seven descendants of my Pikholz great-great-grandparents. Both of these ancestors are Pikholz.

Then there is the X, chromosome 23. The relevant matches look like this. 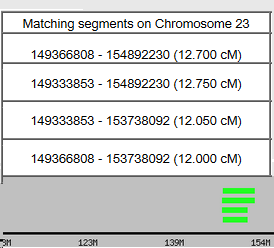 The four nearly identical matches belong to two of my sisters, my father's brother and my fourth cousin Lydia. They all triangulate, so they are all from a common ancestor.

This cannot be from my grandfather, because Uncle Bob gets no X from his father. So we know it's my grandmother's side. So given Lydia, who is part of my grandmother's paternal grandmother's Zelinka family, how exactly does this fit together and who is the candidate for the common ancestor?
Our most recent common ancestral couple are Isaak and Sari Zelinka, who were born in the mid-1780s. But Lydia's second-great-grandfather Nathan Zelinka received no X from his father, the source of the match between Lydia and Uncle Bob must be from Sari, Isaak Zeinka's wife.

Nearly two years ago, Uncle Bob's daughter Linda and I were in Slovakia, together with our fifth cousin on the Zelinka side, Cyndi and while in Zilina we met Lydia. In the course of taking down her family information, I asked if she knows anything about our third-great-grandmother Sari. Lydia said that she understood that her surname is Politzer. This made sense to me because many years ago, my grandmother had told me that her father was related somehow to Joseph Pulitzer - he of the prize. - but she had no idea how. I have tentatively recorded Sari as Politzer, pending some kind of actual documentation.

So last year, Lydia gave our third-great-grandmother a name and perhaps a family and now we have an actual bit of her DNA.

(Note, I could have seen this with an analysis of Lydia, having nothing to do with Cynthia, but I didn't - so I can thank Cynthia for that.

Caveat - it is theoretically possible that the segment comes from my grandmother's MOTHER's side and that Lydia has some unknown ancestry in Hungary, but I consider this to be a vanishingly small possibility.

The Matching Segments tool on GEDmatch does not include the x chromosome, but on Genesis it does. They call it "Segment Search" and it is on Tier1. There are about three dozen people who share that match with both Uncle Bob and Lydia and I suppose I should write to them. Maybe something else will turn up.

(What I don't understand is why Uncle Bob and Lydia do not show up on Cynthia's Segment Search. I'll have to speak to GEDmatch about that.)

It is my hope that this book will encourage and inspire other researchers of their European Jewish families and other endogamous populations to say “I can do this!”
Posted by IsraelP at 11:39 PM