The Cemetery on the Mount of Olives


The ancient and most important cemetery in Jerusalem is on the Mount of Olives. The Mount was used a burial ground of the Jews of Jerusalem from as far back as the days of the First Temple, and continues to fulfil this function to the present day. During the First and Second Temple Periods the Jews of Jerusalem were buried in burial caves scattered on the slopes of the Mount, and from the 16th century the cemetery began to take its present shape. Many famous names are buried in the cemetery such as the Ohr ha-Chaim, Rabbi Chaim Ibn Attar and Rabbi Yehuda Alcalay who were among the heralds of Zionism; Hassidic rebbes of various dynasties and Rabbis of "Hayeshuv Hayashan" (the old – pre-Zionist - Jewish settlement) together with Rabbi Avraham Yitzchak Kook, the first Askenazi Chief Rabbi, and his circle; Henrietta Szold, the founder of the Hadassah Organization and the poetess, Elza Lasker-Schiller, Eliezer ben Yehudah, the father of Modern Hebrew, Sh. Y. Agnon, the Nobel Laureate for Literature, and Boris Schatz, the founder of the Bezalel School of Art; Israel's sixth Prime Minister, Menachem Begin, the victims of the 1929 and 1936-39 Arab riots, the fallen from the 1948 War of Independence, together with Jews of all generations in all their diversity.

The Jewish people lost all access to the cemetery during the nineteen years of Jordanian occupation and that period saw much destruction of the tombstones. Since its liberation in 1967, there have been sporadic efforts to restore order and many people replaced their relatives' stones. Although most Jerusalem burials are on the newer Har Hamenuhot, the Mount of Olives has become an option once again. But security and safety concerns continued and newly-smashed tombstones were all to common.

I have been there many times and have helped several people find their relatives' graves and on several occasions assisted in setting new tombstones. I described two of those projects here and here.

In recent years, the various Jerusalem burial societies, The City of David and Ir David Foundation and other bodies have led to something of a rebirth of the cemetery. Repairs to the tombstones and pathways, a bit of signage, increased security, an Information Center and a growing website, database and search engine have made the ancient cemetery more friendly. Someone not familiar with the area will still have to do his best to find the right section and then phone the Information Center or the relevant burial society to get specific directions.

David's great-grandfather
My high school class set up a website a few years ago in preparation for our xxx-ieth reunion and from time to time people still post about their doings. Sunday of last week, Jacquelin Bazell Majek - whom I did not really know though we were in  the same homeroom - posted something about finding her family in census records. I put in my two cents and soon David Slavkin joined the conversation. He and I had a few classes together and I mentioned that I had seen several of his family members' graves in Anshe Labovitz cemetery when I was there looking for some family from Schedrin three and a half years ago.

One thing led to another and he told me that his great-grandfather Yitzhak Hillel Slawkin left Pittsburgh for Jerusalem and was buried on the Mount of Olives sometime in 1936. Monday morning I found the grave in the Mt. of Olives database and was able to tell David his great-grandfather's father's name and date of death. He had died on 26 Shevat which fell in 1936 on 19 February - the same date I found the information. 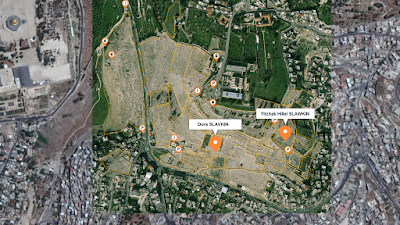 At first, I had found only a Dora Slavkin but when I looked at alternate spellings, I found him as the Hebrew equivalent of Slawkin. The database included a map which showed Yitzhak Hillel's grave in a section I know well, one which caters largely to Americans who either lived in Jerusalem or were brought to Israel for burial.

I told David that I would visit the grave the following Monday, which was today.

Max' great-geat-grandfather
In the course of mentioning this discovery on Facebook, Max Heffler, a genealogy colleague who, like me, has family from Galicia, said that he too has a great-grandfather buried on the Mt of Olives - one that he had not been able to find. He wrote:

My cousin ... has not been successful in locating the grave

I searched the database and found nothing, so emailed the Information Center and asked
for help. The person on the other end turned out to be Aharon Epstein, the son of my friend and fellow Pittsburgher Varda Epstein. Aharon did some more exotic searches and came up with "Rafael Yoel the son of Shemuel Helman who died in 1916." They had "Helman" as the surname, where Max was using the Russian equivalent Gelman as a given name.  No mention of "Zlot." 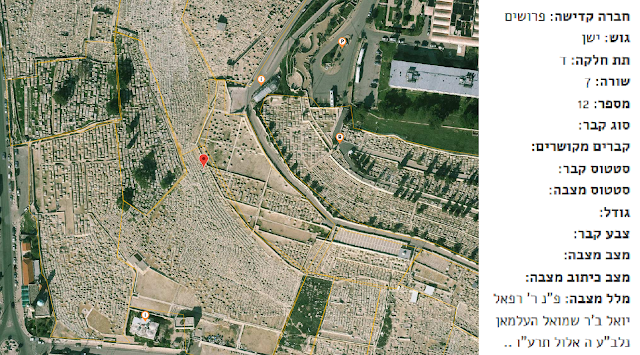 (NOTE: some of the information that Aharon gave me was based on information provided by MyHeritage.)

Visiting the graves
This morning, I ignored the light rain and went up to the cemetery. I did not find the Slawkin grave right away so I phoned Aharon. During the ten minutes it took him to return my call, I found the grave, right up against the wall next to the largest landmark in the area.

The database had described the grave as "neglected" but it looked pretty good to me.


Max' great-great-grandfather took me around and up towards the Intercontinental Hotel at the top of the mountain. Here I needed Aharon to get me into the correct section, but I worked my way down and found the grave itself even before he gave me the specific directions. 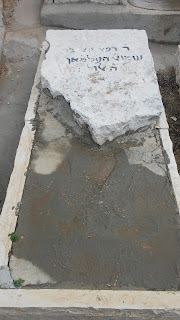 The grave has been repaired but the stone seems to be the original.

Purim is coming later this week. As the old joke goes, they tried to kill us, G-d saved us, let's eat.
Posted by IsraelP at 10:06 PM

Email ThisBlogThis!Share to TwitterShare to FacebookShare to Pinterest
Labels: City of David, Mount of Olives