A New Torah Scroll in Arad

Yes, there are some bits of Pikholz and personal genealogy here.

I left the southern Israel city of Arad twenty-six years ago, having lived there for eleven years. I maintained contact with Arad for quite a few years after that - my mother lived there for fifteen years after I left, I had other friends and family there and it was on one of my routes home from work.

And I maintained contact with others who had left either before or after me. One of these is Moshe Kalush, an electrician, now retired. He left a year or two before me and lives in Beer Sheva. He would often phone his old Arad friends before the holidays.

Moshe phoned me a couple of months ago to tell me that he was donating a Torah scroll to the Ulpana, a girls' religious high school in Arad and he really wanted me to come to the ceremony and celebration which was scheduled for last Wednesday.

He was never a man of great means, Moshe, and he financed this major donation by collecting bottle refunds and by taking apart and selling old motors. 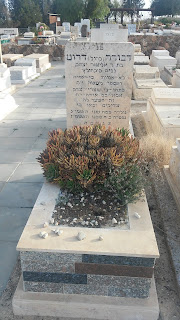 As it happened, the ceremony and celebration were scheduled three days before the thirty-first anniversary of my sister's death, about which I wrote at length here and in passing on other occasions. She had lived up the street from the Ulpana and for a time we had a fund in her memory to sponsor an Ulpana graduate for a year of nursing school.

So after the ninety-minute drive and before attending the ceremony, I stopped an my sister's grave and while I was there, paid my respects to four friends of mine who are buried in a group beginning one row from her grave. I had seen two of those new graves last year. The other two were more recent and in fact I had only heard about the passing of one of those later two. Had they lived a bit longer, they too would have likely participated in the day's activities. In fact, I saw the widows of two of them later in the day.

On the way out of the cemetery, I ran into an old friend, Mindy Sherman whom I had known in my pre-Arad days when I lived in Yeroham. Mindy still lives there. She had an aunt and uncle, Chaya and Yitzhak Yaakov Bistritz who lived in Arad. I knew him back then; he died years ago. Chaya, Mindy's mother's sister, had been living in a nursing hme in Beer Sheva and had died that very day. Mindy was there for the funeral. Small world stuff.

From the cemetery, I went into Arad to the Hashahar synagogue where the final writing of the Tprah scroll was taking place. I had been a member of Hashahar for a number of years and even after leaving Arad I returned there maybe half a dozen times for Yom Kippur. That is also where my sister's body had lain overnight while we waited for the morning funeral thirty-one years earlier. The assembled crowd included several others who had left Arad many years ago - Moshe Kalush had done a good job in gathering up much of "the old gang." Some of those still live in Arad, as do some of their children - whom I know, of course.

The program was organized by Yishayahu Ungar and his wife Shifra. He called me up to write one of the letters in the final verse. The scribe asked my name and when I said "Pickholtz" he asked if I know the school by that name. That would have been the agricultural school in Petah Tiqva about which I wrote here a few years ago. It was often referred to as "The Pikholz School," but Eliezer Pikholz Haniel - the first known Pikholz to return home - has been dead for nearly forty-eight years so I was surprised that the scribe knew it. Eliezer was an agronomist who discovered oil in Kibbutz Hulda before the First World War, but I have told that story before.

The scribe demonstrated one of my favorite family genealogy principles, that the name Pikholz is both uncommon and unusual, so anyone who has ever met one of us will undoubtedly remember when and where. 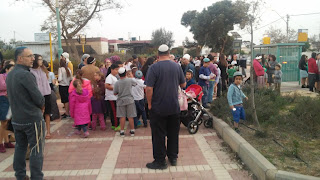 After the writing was completed (and the brief afternoon minha service) we went down towards the Ulpana and waited for the procession to begin. This took place right in front of my sister's house. (Remarkable how many connections there were between these two unconnected events.)

Many more people joined us, particularly young people. Those included my sister who still lives in Arad and probably the last of my mother's friends who still lives there. 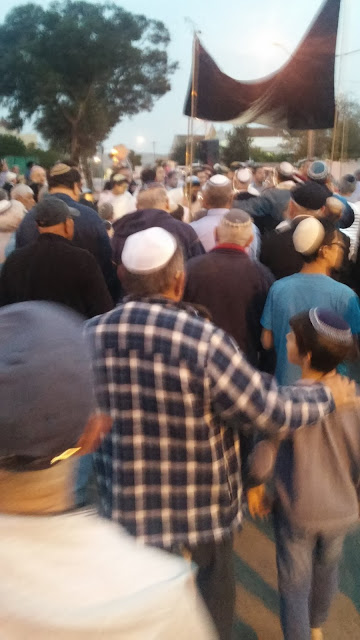 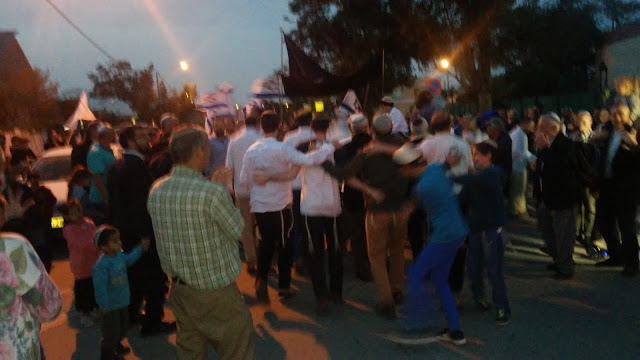 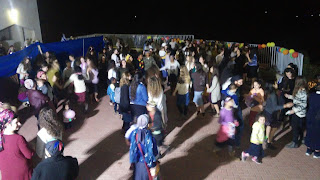 We danced our way down the street and continued the dancing in the yard of the Ulpana itself as night fell.

We ended up in the Ulpana synagogue where there was more dancing, including with the other two scrolls in the ark. 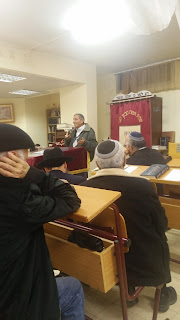 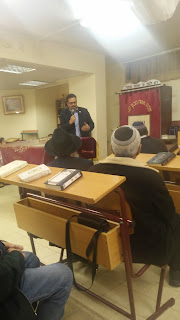 Yeshayahu read from the new scroll and and there were a few very brief speeches (Nothing long-winded here. Moshe wouldn't have stood for it!), including Rabbi Mordecai Cohen of "the old gang," the mayor of Arad and Moshe himself. After a brief evening maariv service, we adjourned to the dining room for a festive meal.

It was getting late and I took my leave before the eating began.

A couple of days ago, I found a reel of recording tape which, according to the label, is my bar mitzvah reading. I remember doing that for my father the Thursday before my bar mitzvah. It is undoubtedly embarrassingly bad, as I had no idea how to read properly back then but I have nonetheless given it to someone to have it digitized. So my grandchildren can laugh at me.

Lara Diamond has created something she calls Ashkenazic Jewish Shared DNA Survey, which shows how much DNA is shared by known Jewish relatives. This is new and I expect we shall see significant analysis in the not-too-distant future. This is different from Blaine Bettinger's Shared CM Project  which does not account for Jewish endogamy.
Posted by IsraelP at 9:52 PM