The Beglers: Bonnie and Marla

So Wednesday afternoon, I am minding my own business when I get one of these "I match [so-and-so-many] of your project. Can you tell me how we are related?" messages that seem to come every other day. In this case, the writer mentioned that her grandparents came from a particular town in Poland and when they arrived in Pittsburgh, they shortened their surname. So I asked her if she is related to my seventh grade teacher and sure enough she is.

Later, I wrote to Bonnie Morris, who sat in front of me during much of seventh grade, and told her the story. We laughed at that and talked a bit and for the first time I asked her about her family history. I knew her family. Two of her first cousins were also in our class and during much of the 1940s and 1950s her father and my grandfather served together in various synagogue capacities, particularly in the 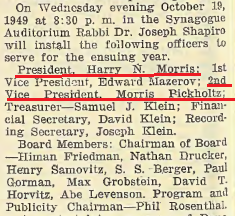 Men's Club. On this particular occasion, I learned that one of her cousins had an older sister I don't recall knowing about and that her father had another brother I have never heard of.

I asked her what "Morris" had been originally and where in Europe they came from and she said that her grandfather had been Matasarnik and that he had come from Uman, a well-known town south of Kiyev. Matasarnik is a name I had never heard so I had a look at the JewishGen Family Finder and saw no one listing it as a surname of interest.

Then I asked about her mother. Mrs. Morris (Pearl) was a Begler, Bonnie told me, from Russia someplace but Bonnie wasn't sure where. So I make another quick trip to JGFF and find this:

Marla Waltman, President of the Jewish Genealogical Society of Toronto, with whom I spent much of last Sunday. Marla Waltman whose mother has DNA matches with almost all the Pikholz descendants from Skalat. Marla has Beglers in what was then Russia and in what is now Pittsburgh. How cool is that!

So I opened a new Facebook chat, introduced them and the fun began. 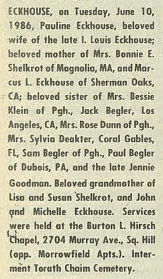 At first Marla thought Bonnie was Bonnie Eckhouse, a known relative of hers, "the daughter of Israel Louis Eckhouse and Pollie Begler."

Wait. I know who the Eckhouses are. Louis Eckhouse's mother is Rose Braun, the aunt of my father's cousin Herb. But Herb had told me that Louis' wife was Pauline Saville, not Begler. So I go off to the indispensable Pittsburgh Jewish Newspaper Project to look for a death notice for Pauline in the Chronicle. And there she is - sister of (among others) Jack, Sam and Paul Begler. (Scratch Saville.)

The burial database at the Rauh Jewish Archives (at the Heinz History Center) shows four Eckhouse graves at Torath Chaim Cemetery and Pauline's father is Yehudah Lev (sic - should be Leib), whose secular name is Louis.

Louis and (Bonnie's maternal grandfather) Harry (Yitzhak) Begler are brothers. Bonnie knows that. Kind of curious that the first cousins Pauline and Pearl (Bonnie's mother) Begler both married men with the same secular names as their fathers and both had daughters named Bonnie. 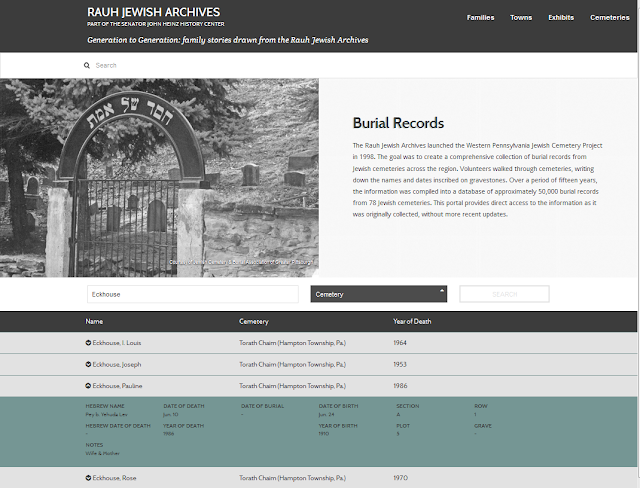 So what is Marla to Bonnie? Marla says that her great-grandmother Sosya Beigler is the elder sister of Harry and Louis. Sosya is the eldest and Harry the third. Sosya married Levi Ben Tzion Spektor and their son Louis is the father of Marla's father Irving Waltman.

How Spektor became Waltman is beyond the scope of this particular article, but if Marla wants to write up the family here, I'll be pleased to give her the space to do so whenever she is ready


Marla says that the parents of Sosya and Harry are Simcha Chaim Beigler and Freda Breteal. Marla says further that the family says they are from Shpikov (48 47 N 28 34 E) in the district of Bratzlav Podolia, later Vinnitsa Ukraine, but the records point to Radyanskoye some 27 miles away. 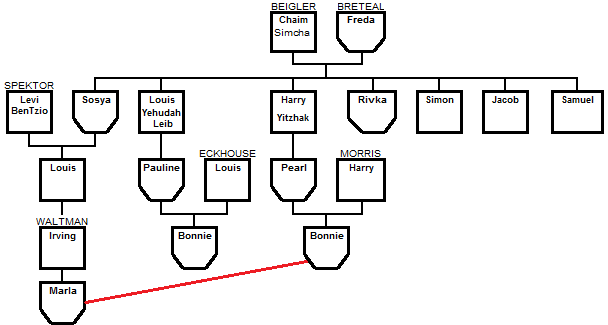 Marla and Bonnie are second cousins once removed. That's pretty close considering that they did not know of each other. For me that's a good day's work. They will no doubt continue talking and I'll be available as needed. Sometimes I'm just a facilitator. But then who else knows both Bonnie and Marla? And I love it when my friends meet each other!
Posted by IsraelP at 9:57 PM