While working a new presentation, I considered that I might want to say something about my second cousins Ruth and Judy, on my mother's father's Gordon side. They are first cousins to one another and their grandmother was the older sister of my grandfather.

My DNA matches with them seem to me to be odd and I have cited them before.

As you can see on the far right, I share 497 cM with Ruth and 249 cM with Judy; Ruth has about twice as much as Judy. (These numbers have changed a bit since I last cited them. Then Ruth's match was more than double Judy's.) My longest segment with Ruth is 64 cM and with Judy 41 cM. The ISOGG chart says that second cousins are 212.5 cM on average, so clearly Ruth is the outlier. 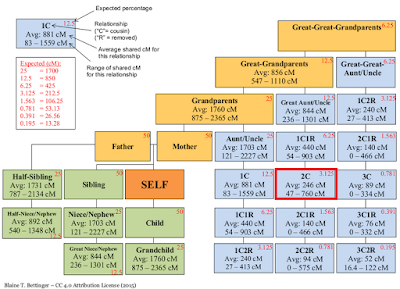 Since Judy and Ruth have the same grandfather, the difference between them - aside from the general randomness of DNA as it passes from generation to generation - is Ruth's father. I don't know much about his background. He was born in New York and both his parents were dead by the time he was twenty-two.

I have not done much to clarify Ruth's father's background, but Ruth has matches of one sort or another with more than forty Pikholz descendants from my ancestral town of Skalat, so I assume he was a Galicianer on both sides.

But before I used these numbers to make my particular point in this new presentation, I took a look at how my four sisters match with both cousins. (The numbers here are from GEDMatch, so are slightly different from those on FTDNA.)

The match between Ruth and me is much greater than her matches with my sisters - 1.7 standard deviations. The average of Ruth's matches with us - 356.4 cM - is nearly sixty percent larger than Judy's - 225.2 - much less of a difference than with me alone.

This would not serve the purpose I wanted for the presentation, but it is worthy of note on its own. Just for sport, I looked at how my sisters and I line up against the rest of our second cousins. I did not include our two double second cousins and our half second cousin, just the straight-forward second cousins with no known endogamy and with standard-issue Jewish parents and grandparents..


There is considerable variation in these numbers. Each of our eight cousins except Terry has matches with us that include one with a standard deviation above 1.4. And Sarajoy is less than 1.15 standard deviations from each of the eight cousins, the rest of us being further from the averages for at least one cousin - in my case, three.

The range of averages goes from Judy's 225.2 cM to Ruth's 356.4 cM and Sam's 360.4 cM. There is a very large gap between Sam and Ruth and the next largest matches - Beth and Susan. I am not sure what to make of it except to say that the "other sides" of the cousins are undoubtedly relevant. Blaine Bettinger announces studies from time to time of matches of known relatives and I have shared this with him.

My own lesson - one that I have written about before and which I hope the genetic genealogy community is absorbing - you must test siblings. You cannot assume that once you have tested one or two children in a family, the rest will not add anything. Even moreso first cousins. "I know he is my first cousin, why do we both have to test?" is, shall we say, not productive.

But test the siblings. Your own. Your parents'. Your cousins'. As much as you can afford. You cannot know in advance how and when it will matter. So just do it.

I will probably find another excuse to hammer at this, before too many more months.

New Family Finder results
Results are in for a new Family Finder test, this one a Pikholz descendant from Rozdol in a family where no one had tested before. This is the family I call IF3, headed by Abraham Pikholz (~1826-1878) one of several sons of a couple (or two couples with the same names) Isak and Feige Pikholz. Abraham's youngest son lived on Nyar Street in Budapest and the woman who tested is one of two daughters of his youngest son.
Posted by IsraelP at 2:27 AM