I have been Facebook friends with Jeannie McClenahan Cecil for not quite a year but it seems like much longer. She told me she had matches with me and several members of my family. Family Tree DNA had us as suggested second-fourth cousins, a category with includes about 130 of my matches and which surely doesn't mean we are that close. 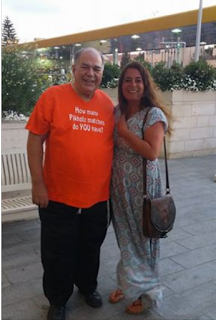 Her father was born in Mandatory Jerusalem to a Jewish mother but was adopted by a non-Jewish couple and from his teen years lived abroad. I don't have all the details straight, but in any case, this is her story to tell, not mine.

Jeannie and her daughter Gabrielle are here for the first time. A long visit, considering that they are first-time tourists.

Last week we went out to dinner, less than a ten minute walk from where her father grew up.

We talked about her research journey that began some twenty years ago, about her impressions of Israel and Jerusalem, about the first cousin of her father who shares his original name and whose wife does the genealogy research from their side. (I am a suggested second-fourth cousin to him as well and his wife and I are now Facebook friends. They live in the same small community as my third son. In fact another first cousin lives on my son's street!)

Jeannie sprinkled her conversation with basic Hebrew words that she had learned from her father, who passed away only last winter. She was clearly enjoying herself and was experiencing a sense of "home." ("Home" is in fact a small town in northeastern Ohio.)

Our matching DNA
And we talked about our DNA connections. We hadn't done much of that during the past year. I tried to be there to give her advice, suggestions and encouragement - the work she did herself, as it should be.

As it happens, of all the matches with my family members, I am the closest both for her father and for the cousin.

Her father, whose father remains unidentified, is in the Y-haplogroup R-M269. So am I, but not close enough to be a match. The cousin has not yet tested his Y-DNA.

These are my matches with Jeannie's father and his cousin. Two of the three are identical segments, the smallest one is not an identical match.

This looks to be fairly straightforward. The three of us share a little over 30 cM, which is third-fourth cousin territory, so the question is on which side.

Jeannie's father's DNA
Jeannie's father matches my sisters, some more, some less. But he does not match Aunt Betty or Uncle Bob. Nor does he match my double second cousins Marshall and Lee. So that points to a match on my mother's side. He matches all six of my cousins on that side - two firsts and two seconds via each grandparent. Here is how my sisters and I, those six cousins and Jeannie's cousin line up with her father on GEDmatch. 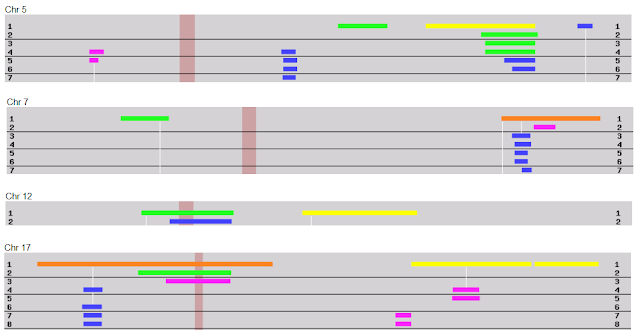 On chromosome 5 where I matched both of Jeannie's kits at 17.32 cM, we see the cousin's yellow bar at the top, followed by my second cousin Sam, then three of my sisters and me. Sam is on my grandmother's side. In the center of that chromosome my sisters and I and my first cousin Kay match Jeannie's father but not his cousin.

On chromosome 7, none of the matches under the cousin triangulate with him except my sister Amy on line four. So these are mostly matches with Jeannie's father including both my first cousins. The small pink segment is a second cousin on my grandFAther's side. But Amy matches Jeannie's cousin as well.

None of my cousins matched the FTDNA segment on chromosome 10.

On chromosome 12, both of Jeannie's kits match my cousin Sam, but not my sisters or me.

Chromosome 17 shows a long list of matches, but only mine (the fourth line) triangulates with Jeannie's two kits. The others who match Jeannie's father but not his cousin include both my first cousins and one of the seconds on my grandfather's side.

So it appears to me that the common ancestor with both of Jeannie's kits and my family is on my grandmother's Rosenbloom side, from Borisov in Belarus. Jeannie's family knows of no connection to that area.

There is likely also a common ancestor also on my grandfather's side who is not reflected in Jeannie's cousin. Since Jeannie's grandfather is not-Jewish, the connection with my grandfather's side must be shared by both him and his cousin since he would have no other way to receive this DNA. It's just the vagaries of recombination that each shows different matches.

The cousin's DNA matches
Jeannie's cousin too has a collection of matches which include my sisters and me and assorted combinations of the cousins on my mother's side. This is the other side of the coin whereby my grandfather's family's DNA came to the two cousins differently. (I am not going to lay all that out here. Jeannie can do it in her spare time.)

But what is interesting is that the cousin has significant matches with me that Jeannie's father does not have. They are not as impressive as the Rosenbloom matches which I discussed above, but there are many and they are pervasive. The cousin has matches with Aunt Betty, Uncle Bob, Marshal and Lee, but they are weak.

There are stronger matches with Craig, Ron and Felisa whose Pikholz roots are not clear, as their farthest known ancestors are from about 1860-70.

The matches cross my parts of the Pikholz family is all directions showing a wide but distant connection. But this does not look to me like a pre-surname common ancestor as there is relatively little with the descendants of Peretz Pikholz and Nachman Pikholz. So perhaps we are talking about the family of Rojse the wife of Isak Josef Pikholz or the family of Taube the wife of Mordecai Pikholz. Or someone via the mother of my g-g-gf Isak Fischel Pikholz. Or my Kwoczka great-grandmother. Most like some some combination of several of these. It would be speculation at this point to try to say more.

What is clear is that this Pikholz connection is with the mother of Jeannie's cousin, about whom I know nothing. Yet.

One other thought. The matches between Jeannie's kits and my mother's side include almost no X chromosome matches, and not many more on the Pikholz side.

Jeannie, you have work to do, though I do not know that we have enough to break this wall down. For now.

Jeannie's story is different from the usual "How I found my family" and I suggested that she might want to propose a presentation for the IAJGS Conference in Orlando next year. With or without the DNA component. A daughter of Jerusalem has come home.

Housekeeping notes
Y-DNA
A couple of weeks ago, I mentioned the study published in Avotaynu by Rachel Unkefer, J. B. Royal and Wim Penninx called Y-DNA Evidence for an Ashkenzai Lineage's Iberian Origin. This study is being done on a haplogroup called FGC20747 and it includes my line. That article is now available here. I mentioned this to the Pikholz descendants from Skalat, for whom it is relevant and my cousin Terry asked if this would permit us to eat rice on Passover, as the Sephardim do and would it help get EU citizenship.

I am an authority on neither subject, but I think the EU has a list of approved surnames and you have to belong to one of them to qualify for a restoration of Spanish citizenship.

On the question of rice - and I repeat that I speak with no authority - it seems to me that there are several problems. First of all these customs are generally patrilineal.  Terry's grandmother is the Pikholz, not her grandfather. So she is probably stuck with his rice.

Secondly, DNA has not achieved any status of halacha, so Sephardic ancestry would probably require a generation-after-generation proof, not something macro like DNA patterns.

Third - and again, I speak with no authority - even if we pass the test on the first two points, there is probably a requirement for nullification of a vow, as some ancestor six, seven or more generations ago surely took this custom voluntarily.