It was a few days before Hanukkah twelve and a half years ago and I was in the library at Yad Vashem when I first laid eyes on the testimony of Olga M. Pickholz-Barnitsch. I had first seen her name four years earlier in the bibliography of an article in the Journal of Historical Review, citing two articles she had written in the Yad Vashem bulletin. I did not know who she was or what became of her; I assumed that she was born Olga Pickholz and Barnitsch was her married name. I certainly did not know that she had submitted a testimony of her own that covered more than thirty pages of typewritten Polish.

Dr. Olga Barnitsch of Ramat Hasharon Israel, born 27 June 1914 in Lwow, gave testimony which mentioned, in addition to her own family, the following surnames:

The opening passage identifies her father as Maurycy Pickholz, the son of Jozef of Grzymalow. and Zisli (Gruber). From the opening line we learn that Michalina Pickholz took the name Olga Barniczowa during the war and her husband was Leon Auerbach of Stanislawow.

Later on page four, she names her Migden, Lippmann and Schwefelgeist cousins.

It was many years later, after our DNA project bore fruit, that I was able to identify Michalina/Olga as my father's third cousin, a great-granddaughter of Uncle Selig. 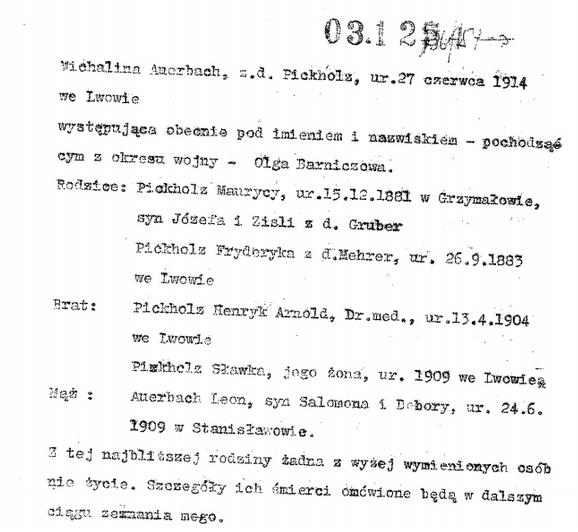 This is the family as we came to know it, down to Olga's generation.

But I am not here on this Holocaust Memorial Day - Yom Hashoah - to tell the story of the family structure. I am here to tell you that this week, Anna Mecik, the daughter of Olga's cousin David, has completed a translation into English of Olga's personal testimony. A copy has been submitted to Yad Vashem.

You can find Olga's testimony linked from this page, as a Word file. If I may say so, this is a good day to read it.


The population registry knew that Olga had died in 1964 at age fifty, however had no idea where she was buried. But the sole remaining Migden cousin knew and a few years ago I visited her grave at the very back corner of the Old Ramat Hasharon Cemetery. 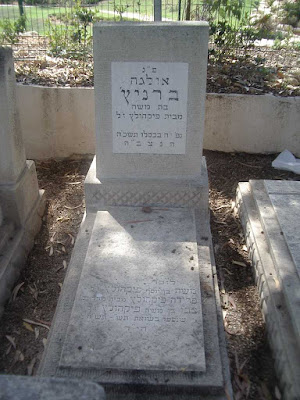 Anna Mecik, my fourth cousin, has begun working on a translation of Olga's report on the crimes against the Jews at the camp at Stutthof.
Posted by IsraelP at 8:00 PM