Let Me Say It Once Again - Siblings!

Less than a year ago, in a tail-end segment in a larger blog, I discussed the importance of siblings' testing.

The case at hand then was our fourth cousins Anna and David, two of the three living great-great-grandchildren of Uncle Selig Pikholz. Or more precisely, the demonstration that they are indeed our fourth cousins.

Anna and David are half-siblings and both have all their Jewish DNA from the father that they share.

Many of us have a tendency to test one person from each family, then move on to known first and second cousins, in order to get a genetic picture of our families. Partly it's a matter of budget. Who has funds available to test everyone. And besides, we tell ourselves, how much different will one sibling be from another. And if I have two, do I really need the third? And the fourth?

Many of us did that back in the pre-genetic days when the biggest thing was interviewing relatives. Who has time to get to everyone? And how different will one older relative be from another. We know they can and will be different, but we rationalize because we really cannot get to everyone.

Many of us did the same with records. When the AGAD records - for east Galicia - became available in the archives in Warsaw, we often saw hundreds of relevant records in the index. Our budgets were limited so we'd order one or two of each family. The parents are the same from one to another, so what's the point of spending money for another six births to the same couple.

The same is true for DNA. As this is important, I am going to quote myself verbatim before adding a new point. 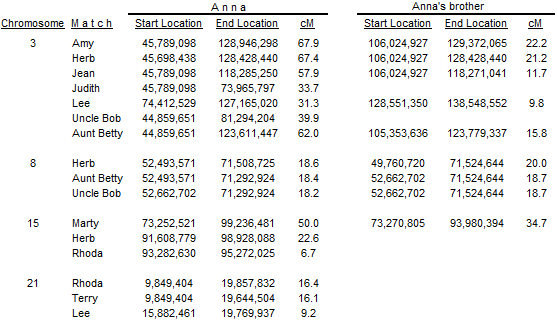 
Both have very large matches with Marty on Chromosome 15 - Anna's is 50 cM!


But Chromosome 3 is remarkable. Anna's brother has a nice set of matches with five of us, two of which are a bit more than 20 cM. But Anna has seven matches, all over 30 cM and four of them are 57-69 cM! This is huge for four fourth cousins and three third cousins once removed. And keep in mind that Sarajoy and I are not there at all.


If Anna were not known to be a cousin, these numbers would jump off the page - but only by looking at the largest segments or the individual chromosomes. 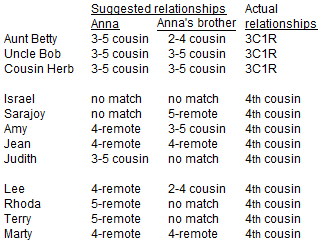 
And perhaps most important is the lesson about testing cousins and siblings. Before Anna tested, her brother's results were anything but inspiring. If someone had said "Why do we need her? We have her brother!" look what we would have lost out on.


And even with Anna, if all we had from our side had been Uncle Bob, Terry, Rhoda, Lee, Judith, Sarajoy and me, it would have been a fine test collection of seven people but we would have missed the best results.
In the meantime, we have one new test, Lee's brother Marshal. Does he matter? Could he possibly make the case stronger than it already is? Let's have a look.

Marshal's match - such as it is - adds nothing.

What does Marshal have?

Marshal matches David, but not on the chromosomes where Lee has his significant matches. And Marshal doesn't match Anna at all.

So indeed, why do we need Marshal in this analysis? (In fact, no one pushed him to take the test after lee had done so. Marshal decided that on his own.)

But this is the wrong question. This test was ordered for Cousin Margie, their mother. She was not able to do it and after she died, Lee took her test. I assume that was a random decision - Marshal could have taken it then. If he had, Lee could have said (we all could have said) "Marshal has tested, why do we need another one?" From where we are now, we know the answer to that. Lee had this wonderful match with Anna that Marshal didn't. Like three of my sisters who match Anna, while Sarajoy and I do not. And David's unremarkable matches do not compare to Anna's.

This is probably not the last time you will hear me on this particular soapbox.

Housekeeping notes
The deadline for ordering "ENDOGÀMY: One Family, One People" for pick-up in London on 1 June or in Toronto at the Ontario Genealogical Society Conference is 30 May.

I shall be speaking in Buffalo Grove Illinois on Thursday 14 July. Time and address to be announc3d.