Another year of mourning the Temple in Jerusalem and the loss of sovereignty that came with it. And another reminder that what we read ten days ago is still relevant.

Alliances are temporary and trust in the nations is folly. Always was and always will be. Tempting though it may be to think otherwise.

Yesterday's fast is behind us and this week's blog is a day later than usual.

Social Security Applications and Claims Index, 1936-2007
Last week, the genealogy community heard about a new database available on Ancestry.com, a database of the sort that most of us thought we would never see. The government has been chipping away at the Social Security Death Index for several years now due to some spurious privacy issues, so imagine our surprise to see a Social Security database with more information than before. It doesn't cover everyone that SSDI has, but it includes parents' names in both the data and the search.

Here is the way Ancestry introduces it. (The red emphasis is mine.)


This database picks up where the Social Security Death Index (SSDI) leaves off by providing more details than those included in the SSDI. It includes information filed with the Social Security Administration through the application or claims process, including valuable details such as birth date, birth place, and parents’ names. While you will not find everybody who is listed in the SSDI in this database, data has been extracted for more than 49 million people.
Information you may find includes:
You may also find details on changes made to the applicant's record, including name changes and life or death claims. You may also find some unusual abbreviations or truncated entries for county and other names and punctuation errors in the data. These are in the original; we have not altered the text.

Under Pikholz, there are two listings. One man who I knew spelled his name that way in the US. The other is a woman whom we know - the listing is her mother's maiden name. This woman's Social Security document gave her precise birth date which may or may not be correct and a confirmation of a middle name for her mother, which fits oral testimony from a descendant named for her.

Under Pickholz there are twenty-one entries, mostly Pickholz spouses. I know twenty of them, though I must check to see if any of them have information that I don't have already. 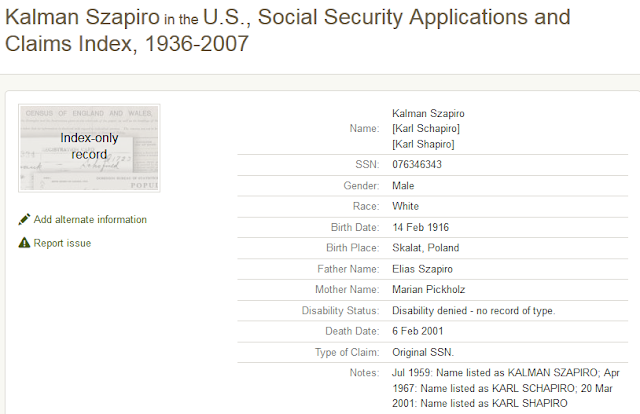 The one I have never heard of is Kalman Szapiro, born in Skalat in 1916, died in 2001. His mother is Marian Pickholz. The record also showed that Kalman became Karl in 1959 and that subsequently Szapiro became Schapiro and Shapiro. As usual, I turned to Renee Steinig for her people-finding expertise and she came up with a funeral home in Florida. I wrote to them asking if they would give me contact information for next of kin or at least pass on a letter from me. (An obituary had no family information.)

There are other kinds of follow-up to do, which I'll try to get to in the next week or so.

The Pickholtz entries
I moved on to Pickholtz where there are thirty-two entries. Among those is Max Greenberg about whom I blogged a few weeks ago. This new document could have saved me a lot of work finding him!

Most of the rest I know, but again, I must check for new details. 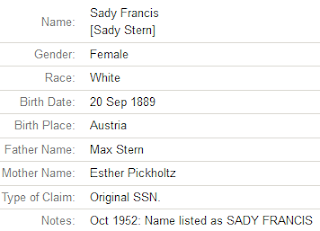 Another one caught my attention - Sady Francis, the daughter of Max Stern and Esther Pickholtz.

It took some time until I realized that I had first seen this woman last winter and had even blogged about her. Her husband's brother is the husband of my grandfather's cousin. This new document reminded me that I still have work to do on those two couples.

A completely new one is Abraham Izen, the son of Joseph Izen and Sophia Pickholtz, born in 1882 in "Charkoff, Soviet Union." That
would be Kharkov, a large Ukrainian city that was in the news a few months ago as part of 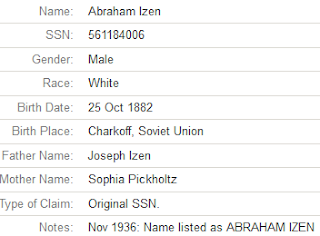 the conflict between Russia and Ukraine. In 1882 it was unambiguously Russia.

Though Kharkov is not near Galicia, we have another Pikholz family there, the three children of Rose Pickholtz and Jack Lipschultz. One of those three, a daughter Sylvia, was supposedly born in 1890. Unfortunately Sylvia';s great-granddaughter dropped off my radar about ten years ago. We know nothing further about this Kharkov family, but age-wise Sophia Pickholtz Izen may well be a sister of Rose Pickholtz Lipschultz. Or not.

The last of the thirty-two was also from Russia, but from a place of greater interest: Nemerow.  Mollie Wilder was born 12 May 1902 in "Nemrov, Soviet Union" to Benjamin Weinstein and Sheva Pickholtz. She died in 2001. Nemerow is in Podolia, south east of Skalat on the road to Odessa. Russia, not Galicia. 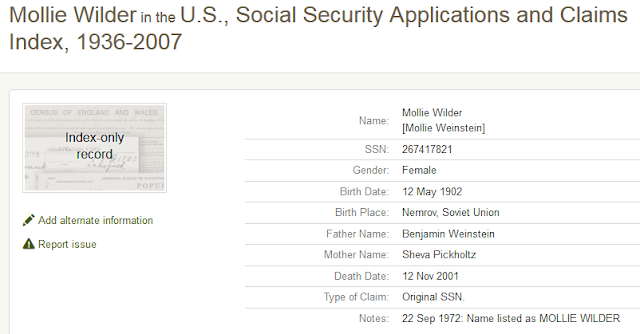 We know Nemerow as the birth place of Nellie Rochester (Necha Pickholtz) of Kansas City Missouri and Pomona California. She and her family went to California soon after 1920 but left behind a married daughter whose family remains in Kansas City today. In fact, one of Nellie's great-granddaughters, Joyce, tested for our DNA project. Joyce's matches with the other Pikholz descendants are few and weak. Now we have this "Sheva" as a probable sister to Nellie.

A probable brother Moses was last seen boarding a ship to London and New York.

Again, Renee jump-started my research, finding New York marriage records on Family Search for Abraham (b. 1892) and Samuel (b. 1900) Weinstein, sons of Benjamin Weinstein and Sadie Pickholtz. They are almost certainly be brothers of Mollie.

Among the other bits and pieces that Renee found is an Ancestry tree by Mollie's granddaughter. We have already made preliminary contact. Her father is living and I have already mentioned that I'd like his DNA. If he is a second cousin once removed to Joyce, that should be an easy match.  In the meantime, I have introduced Mollie's granddaughter to Joyce and we'll see how that develops.

Much work to do.

Housekeeping notes
ENDOGAMY: One Family, One People had a nice write up in "Nu, What's Nu" (a weekly genealogy newsletter by Gary Mokotoff of Avotaynu) yesterday and I am looking forward to some proper reviews as well.

A reminder, the pre-release discount expires on 3 August.

I have a few more talks set, both in the US and here at home. The schedule looks like this: