Max
As I have said on many occasions, the Pikholz families come from two towns in east Galicia - Skalat and Rozdol. Any others are presumed to have come from one of these towns. Usually it is not hard to tell which.

Then there is the family I call CHONE. (That's a nickname for Elkhonon and is pronounced with two syllables.) It refers to Elkhonon Reuven Pikholc who was born in 1888 in "Lenkow, near Poltava." This would be easier to define if there actually were a town called Lenkow near Poltava - which is in Ukraine well east of Galicia. Even east of Kiev. If there is, I have not been able to identify it. The family could have come from either Skalaters or Rozdolers.

According to the birth records of his sons, Chone was married to Rosa Wajnstejn of Bialystok and Bialystok is where their three sons were born in the period 1914-1921. The eldest son Max (=Mordecai) changed his name from Pikholc to something more Israeli-sounding. I am in touch with his daughter, who - for my purposes - represents her two younger brothers. All three live in the United States.

It is recorded that Chone's father is Nachum Leib and with that, the road to the past ends. Nachum as a Pikholz given name is nearly unique. So are Elkhonon and Reuven. In short, I have no idea who this family is and I have not spent much time on it. Max had a brother, whose name he did not remember, who died in Bialystok at the age of four. Another brother, Moshe, was born in 1921 and died in the late 1940s, perhaps in Warsaw.

Y-DNA
When we began looking at DNA, this family seemed like an obvious candidate both for a Y chromosome test and for a Family Finder autosomal test. Max' daughter began working on her brothers as she could not do the Y test. The brothers were very concerned with privacy and when, after two and a half years, one agreed to test, he did so under an assumed name.

In fact, after he did the tests, he delayed a number of months before releasing the results, which meant he couldn't even see them himself. For that reason, this family's results are not discussed in my book ENDOGAMY: One Family, One People which is now available for preorder.

Now, however, the results have been released, though I do not have permission to do analysis on GEDmatch. So let's see what we have.

His Y-37 test shows his paternal haplogroup to be R-M124, not at all similar to either of our known Pikholz families. That does not mean that there is anything amiss in the family genealogy. Chone could have gotten his Pikholc surname from his mother. Or his father Nachum Leib could have gotten it from HIS mother. Those are the easy, normal answers.

More complex explanations could be adoption or some non-paternal event. Not to mention that his Pikholc name could have arisen independently of our own.

Autosomal DNA (Family Finder)
Of his more than five thousand Family Finder matches (about ten percent more than I have), Max' son matches thirty-one Pikholz descendants. But he has 113 matches before he reaches his first Pikholz. That first one is Gene, a descendant of Peretz Pikholz and 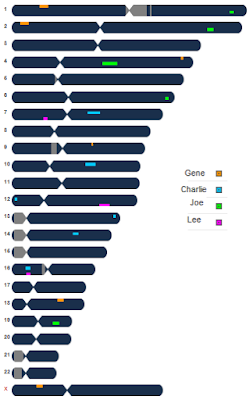 they are suggested second-fourth cousins, with shared segements of about 114.4 cM, the largest being just over 17 cM. His next three matches are with Charlie, my third cousin Joe and my second cousin Lee - all these suggested as third-fifth cousins with 74-104 shared cM. His largest match with each of those three is 13-14 cM.

I did a chromosome browser showing how those four match Max' son and except for a small segment on chromosome 16, there are no matching segments. On chromosome 16, we see a match with Charlie and Lee, but they do not triangulate, so Charlie matches on Max' side and Lee on Max' wife's side - or vice versa.

I compared Charlie, Dalia, JudyT and Nan - all descendants of the Isak Josef - Mordecai & Taube complex - and found some interesting results.  On chromosome 17, Dalia and Nan have nearly congruent, triangulated segments of 11-13 segments. 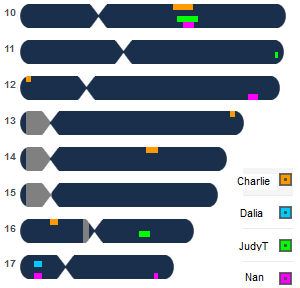 On chromosome 10, Charlie (13.6 cM), Judy (12.2 cM) and Nan (6.6 cM) have overlapping, triangulated segments with Max' son. These two seem to show that the family of Chone is part of that family group, though the evidence is certainly short of overwhelming. Considering that Chone's son is Max/Mordecai, if I had to guess, I would say that either Chone's mother or paternal grandmother was a daughter of Mordecai and Taube. But that is hardly more than speculation. Anything further would require documentation of the sort that we don't have. Of course, tests by additional family members could also be useful.

It appears, at least, that this family is a real part of the Pikholz family and not someone who comes at us from the presurname period in the early 1700s. And the Family Finder matches are with very few Rozdolers, so I think we can cross off that possibility.

Housekeeping notes
I participated in the IAJGS Conference here in Jerusalem for four days last week. The lectures were short this year - forty-five minutes instead of the usual seventy-five - and I attended two or three each day. I spent alot of time speaking with peoiple, meeting old friends, etc. And I was interviewed about ENDOGAMY: One Family, One People by a few Israeli publications.

I was also able to help people with their personal DNA analyses and sat at length with a few others discussing DNA testing and analysis in general.

The air conditioning was devastating but we were compensated with free coffee and tea.

I split much my time between the Israel Genealogical Society table and the Avotaynu Online table. (I have to get more involved with them.) Adam Brown gave an interesting talk Thursday afternoon about a budding Avotaynu Online project to do a genetic census of the Jewish people, because the endogamy factor guarantees that we are in fact one people.

I spoke briefly with Max Blankfeld of FTDNA who was selling test kits. Max is my closest Family Finder after my first twenty known relatives, but we haven't a clue how we connect. It is no doubt a large number of distant connections.

And I bought a one-year subscription to the My Heritage database.

Wednesday, six bloggers - including Dick Eastman - went out to lunch together.

Next year the Conference is in Seattle, but it ends the day before the Tisha beAv fast, so I do not plan to attend.
Posted by IsraelP at 4:57 PM