What DNA Came From Which Ancestors

As I have gotten older, I have become more hesitant just diving into new technology. Invariably, once I get into it, I get used to it fairly easily, especially when I really need what it has to offer.

A few days ago, I finally got into mapping chromosomes with the help of two graphic tools from Kitty Munson Cooper, whom I met in Salt Lake City.

The object of this exercise is to see which bits of my own DNA can be traced to specific ancestors, or more correctly to which ancestral couple. (An extension of that would be to reconstruct the DNA of those ancestors, but that is another story.)

I am going to present here only my paternal side. I expect to see test results from two second cousins from my mother's side and I'd rather wait on those before drawing conclusions there.

The chromosome browser provided by Family Tree DNA, allows a comparison to only five people at a time. Kitty's Segment Mapper allows comparison to as many as forty people at once.  Soon enough I'll try more comparisons, but for now all I need is ten.

Ralph has two bright green segments in chromosome 1 and another in chromosome 19, all of them overlapping several descendants of my grandparents. Since Ralph is on my great-grandfather's side, these segments must be from his parents Izak Fischel and Rivka Feige.

There is a nice match involving Ralph, my sisters and me on chromosome 3, but no one else among my father's relatives. I have not included that because it is quite possible - prehaps even probable - that this represents a connection between Ralph and our mother's side.

Many of the remaining segments are pretty clearly from my great-grandparents, but we don't know enough to say which of them. Yet.

I should be able to add additional segments to my specific ancestors by using someone other than me as the base. That would be the case if Ralph or Pinchas or Bruce matched a handful of my father's family members, but not me. I am not sure there is a tool for this. 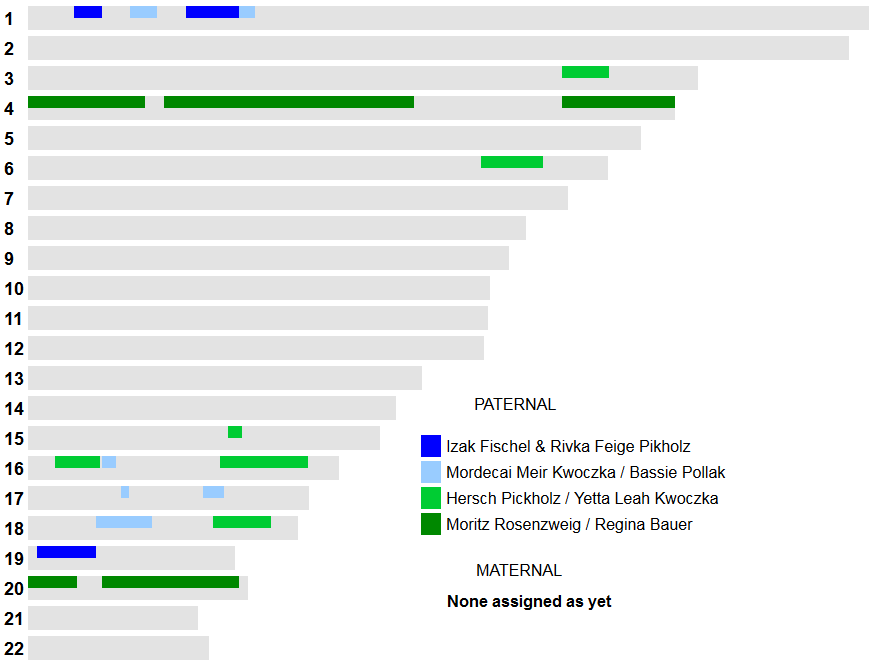 As I say, I am trying to be conservative here, so I did not label any of the sections of the middle chromosomes, even though the first figure shows a high likelihood that there are segments on my Pikholz/Kwoczka side.  I'd like a bit more proof there.

I am also aware that all of this is tentative because the chromosomes come in pairs and it is possible that when I have a match with two people at the same place, one might actually be from my mother's chromosome and the other from my father's. I need to figure out an efficient way to check this. (See my remark about chromosome 3 above.)


But thanks to Kitty, the process wasn't hard. I think I am getting the hang of it. I should be able to add some other Pikholz descendants to the segment mapper and we'll see what shows up. But not this week.

Housekeeping notes
We are away for a few days, so I may not be as responsive as usual.