Last year, my son concluded thirteen years as rabbi of a small congregation in suburban Chicago. During a number of those years, he and his family - his wife and six sons - would vacation at the yeshiva in Lakewood New Jersey, driving both ways. It is a long drive and usually they would stop overnight in Pittsburgh at Aunt Betty and Uncle Ken's.

This is the story of one of those stopovers.

Before the big event
I went to Washington DC for the IAJGS International Conference on Jewish Genealogy, after a few days in Baltimore (another story for another time). The Conference ended Friday and Elliot Greene dropped me at the airport in Philadelphia where I picked up a rental car and drove to Lakewood.to spend Shabbat with the kids. (I told a story mentioning that Lakewood visit here.)

I spent a very pleasant day with the family, my son his wife and five of their six boys. Their second son, Avrohom, was in camp in Cleveland. The plan was that Abrohom would meet up with the family in Pittsburgh, getting a ride from Cleveland with one of the Pittsburgh boys at camp. But that wasn't going to work out, so I became the back-up plan.

Avrohom's thirteenth birthday fell while he was at camp, and they made a bit of a thing about his becoming a bar mitzvah. The bigger,family celebration was to be the Shabbat immediately after returning to Chicago, with a Sunday evening planned at Skokie Yeshiva for more family, classmates etc.

The kids' trip back to Chicago from Lakewood included Wednesday night in Pittsburgh. Wednesday night, meaning Thursday morning. I saw an opportunity and everyone signed off on it. 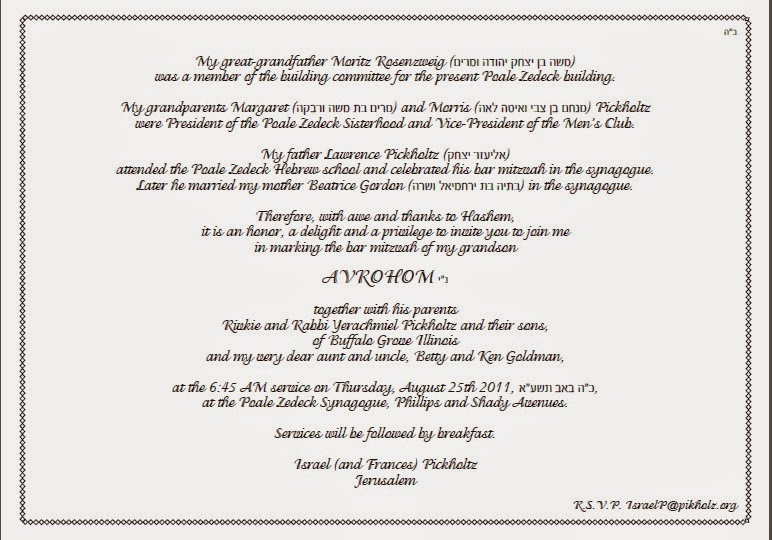 From my great-grandfather down to my grandson. That's six generations.

It was not meant to be something big. The invitation went out to family members in Pittsburgh, including some we barely knew, as well as to a few old classmates of mine.

Pittsburgh Week - the first days
Sunday I returned the rental car in Philadelphia and flew to Pittsburgh where I picked up another. Sunday, Monday and Tuesday I did alot of visiting with Aunt Betty and Uncle Ken and Monday I did a round of cemeteries on the north side of Pittsburgh. Probably a dozen of them.

Tuesday morning my wife arrived from Israel, to join the party.

Wednesday I drove to Cleveland to pick up Avrohom from camp. On my way up I stopped at the Ridge Road Cemetery where I photographed nine family graves. On the way back to Pittsburgh, Avrohom and I went to the Kinsman Road cemetery and visited the grave of my grandmother's brother Sig Rosenzweig who had died in1918 of influenza. He was twenty-seven.

The inscription is very difficult to read and finding the grave took quite a long time. I am guessing that we were the first family members to visit in decades.

Once in Pittsburgh, we made a stop at the Old Poale Zedeck Cemetery in Sheraden, where we visited the graves of my great-grandparents Regina and Moritz Rosenzweig (he of the shul building committee), my grandparents, Uncle Joe and Aunt Helen and some other family members. Avrohom appeared interested.

By the time we got back to the house, my son and family were there.

Thursday
Everyone was up early Thursday. How could we not be.

There had been some serious flooding earlier in the week, with deaths, and there would be more in another month, but this night was wind. And fallen trees. Rain as well.

We were only five houses away from the shul, but even that was something of a project. A number of our local guests did not make it, much as many had missed my own bar mitzvah years before due to an eighteen-inch snowfall the day before.

But we had out-of-town guests, despite the fact that we had only invited locals. Uncle Bob and his wife drove in by trailer from Baltimore ("Why go to a party in Chicago where there is an actual Torah-reading in Pittsburgh?") His daughter Linda - never one to miss a family occasion - came up from West Virginia. Three Kwoczka cousins - two of whom I had met less than two weeks previous - drove up from Baltimore. And a "new" third cousin from the South Hills and a classmate from Fox Chapel came despite the weather.

And sometime along the way, we heard that my great-grandfather, Moritz Rosenzweig, had made an appearance. He was on the building committee, but died in 1928, weeks after the first High Holiday services in the new building, but while they were still holding services in the old building in the Hill District. His wife had a stained glass window installed in his memory, at the top of the front wall of the main sanctuary, to the right of the Aron Kodesh. There was a heavy glass plaque.

During Shabbat services, less that two weeks previous, the plaque fell and shattered. They say it nearly hit the shul's executive director on the head.

It was as though Great-Grandfather was saying that we shouldn't forget him on this occasion.

We had the regular Thursday morning service. Avrohom read the Torah. I was saying kaddish for my mother that year, so there was that.

Afterwards we adjourned to the social hall downstairs, a room that had seen many family celebrations over the years. A buffet breakfast with enough left over that the kids made sandwiches for the drive to Chicago.

I spoke. My son spoke.

On the occasion of my father's bar-mitzvah seventy-five years previous, his grandmother, the wife of Moritz Rosenzweig, had given him a set of five machzorim, with the prayer services for the holidays.. Those came to me after my father died and I had them rebound a couple of months earlier. There - in the same place where my father had celebrated his own bar mitzvah - I turned them over to my grandson.

Afterword
Then everyone went home. 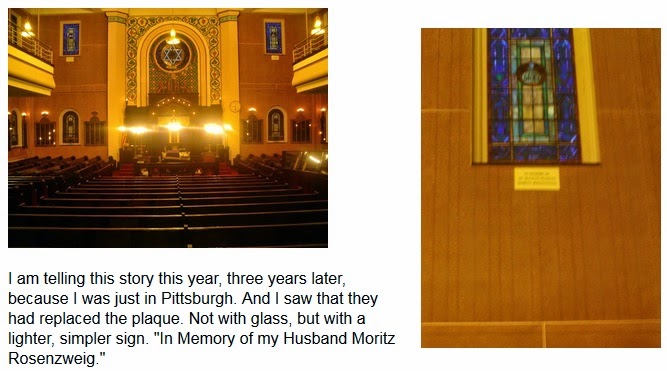 And because I have just spent a full week with Aunt Betty and Uncle Ken while in town for my DNA course. After having spent three days with Uncle Bob and Ro in Maryland. 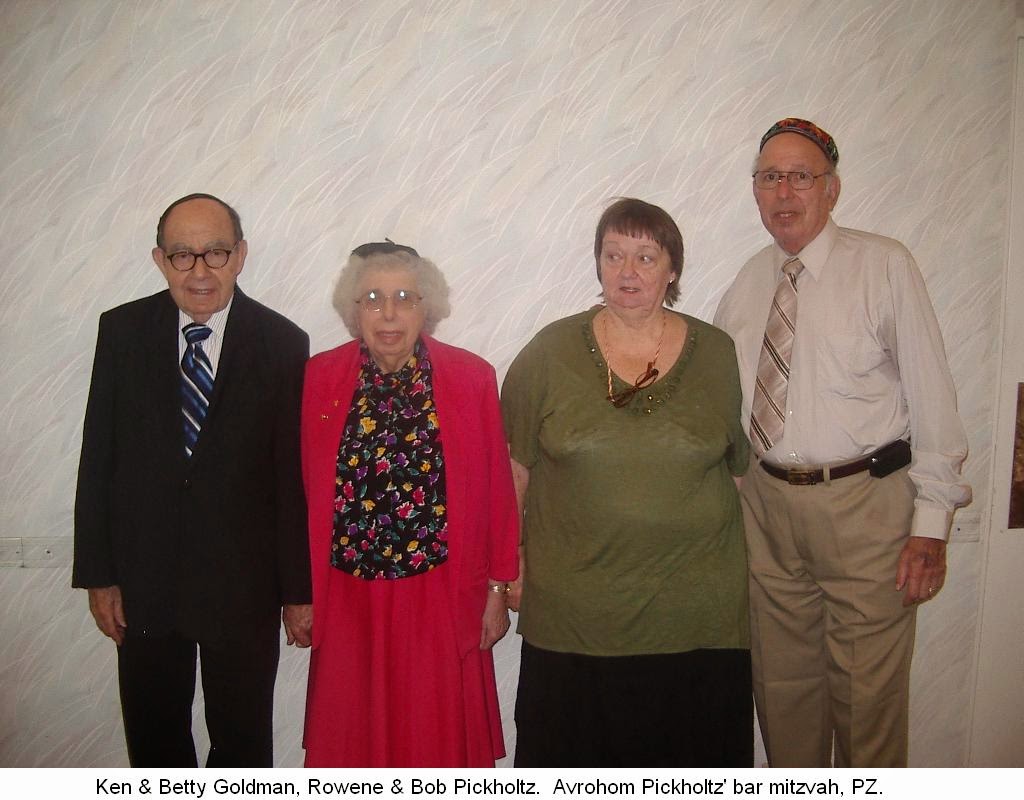