The Dead Man In The Zellermayer House

Last week, I wrote about the new acquisitions from the AGAD archives, including the 1909 marriage record for Abraham Eisig Zellermayer and Basie Pudles and the 1910 birth record for their son Jonas.


According to this record, Abraham Zellermayer was born 27 February 1883 in a town called Liczkowce, near Husiatyn, to Zelman Juda Zellermayer and Ettel Pikholz.

This index entry from JRI-Poland appears to be the birth of his father. The actual record is just below but it is very difficult to read. (Thanks to Mark Halpern for his help with that.)

There are several connections between the Pikholz and Zellermayer families, as shown below, with the Pikholz shaded blue and the Zellermayers shaded yellow.  I am not sure exactly how the Zellermayers on the right connect to those on the left, but there are clear indications that they do, including the fact that one on each side (in red) was born in Liczkowce. 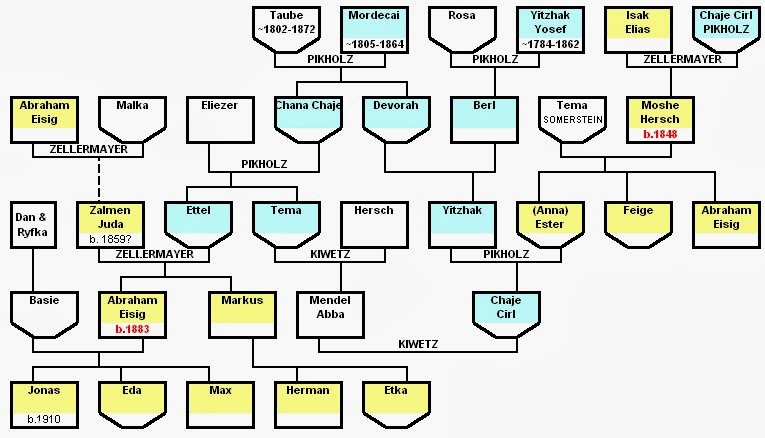 I have been particularly interested in Chaje Cirl Pikholz in the top right corner. I haven't a clue who she is.1 We have no other children for her.

It had been my impression that Abraham Zellermayer and his wife had come to Israel in the 1930s, but I had never found any
trace of them here and the two granddaughters I know have never been particularly communicative. But once I learned from the marriage record that he had been born in Liczkowce in 1883, I realized that I did have evidence of his arrival. I just hadn't realized that on his Mandatory Citizenship file, he had gone by Adolf. I already had the file for his son Jonas, aka Julius, and it was easy enough to copy Abraham's as well. Basie went by Berta. They had lived previously in Vienna.

When I sent the marriage record to the granddaughters, one of them told me that Abraham and Batya, as she was known here, were buried in Tel-Aviv's Kiryat Shaul Cemetery, which is online and where I had not seen them before. This time I searched by given names and fathers' names and found them.

I shouldn't have been surprised. I already knew that their younger son was listed as Max Zeller Meyer. Next time I am in the area, I'll photograph their graves and add them to our Virtual Cemetery.

So that should have wrapped up this inquiry, at least for now. Except for the matter of Gabriel.

I  have mentioned the family of Gabriel and Sara Pikholz from Husiatyn several times, including in connection with some of the new records last week. In fact, I wrote at some length about their family only two months ago. Gabriel Pikholz died in Husiatyn in 1852 at age thirty. I believed (and still do) that Gabriel was the son of Nachman Pikholz (b. ~1795) and the father of Moshe Pikholz, whose family appears here.

What I did not mention before is precisely where in Husiatyn Gabriel Pikholz died. 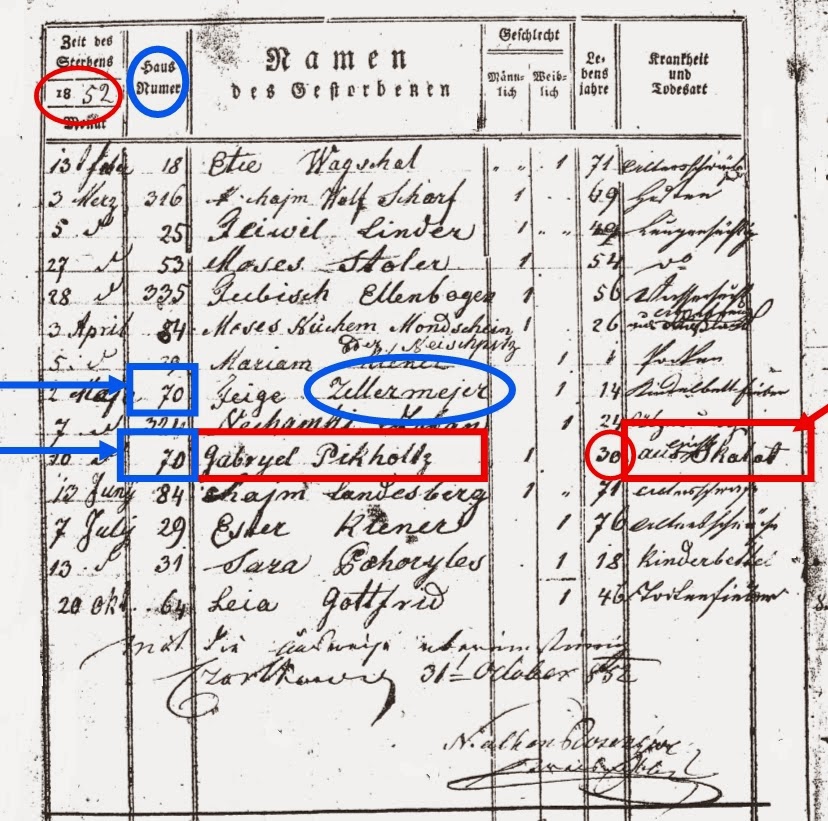 House number 70 in Husiatyn is where one of the Zellermayers lived. We see that Feige Zellermejer died in house number 70 just four weeks before Gabriel, identified as being "from Skalat," died in that same house.

My impression has been that this is where Gabriel stayed when he went to Husiatyn, very likely for some reason to do with his Hassidic rebbe.

I do not know exactly who this fourteen year old Feige is. I have not tried to piece together the Zellermayer clan and we do not have access to the full set of records.

But I do have a full copy of the Husiatyn death records for the period 1816-1876. I started looking through them in reverse order and saw that none of the later ones had house numbers. 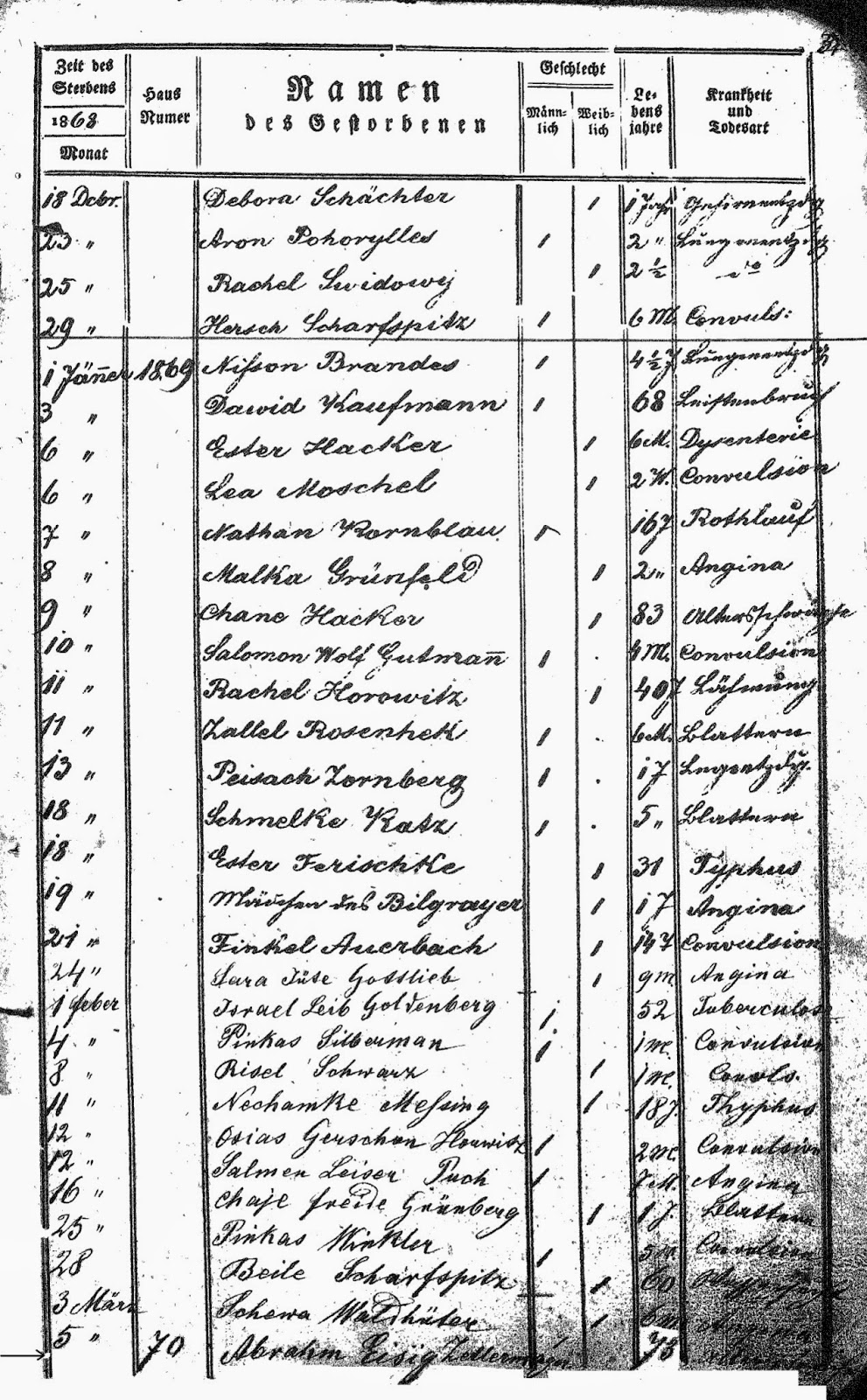 Down at the bottom of the page, in house number 70 is the death of Abraham Eisig Zellermayer, age 73.

Well, we have a birth of Selman (=Zalman) to Abraham in 1859 and he is very likely the father of the Abraham Eisig born 1883. If this Abraham Eisig who died at 73 in 1869 is Selman's father, it would mean Selman was born when his father was past sixty. Maybe. Or maybe not.

We have a thirty-one year old Malka Zellermayer who died in house 70. That's the name of Selman's mother. But this Malka died in 1851, so she wasn't the mother of the Selman born 1859. (No "maybe" about that.)

There was a Juda Zellermayer who died in that same house in 1850 at age twenty-eight and a Nisin(?)2 age ten in 1836 and a baby named Baszie in 1830. There is also a Chanzie Mariem Celler in 1837 and I am assuming that she is also Cellermayer.

The only non-Zellermayer who died in this house was Gabriel Pikholz. But it would be a leap of faith to cite a family connection between Gabriel and these particular Zellermayers - who may or may not be the family of "our" Abraham Eisig.

Or maybe there is one more Pikholz-Zellermayer marriage we hadn't known about. After all, we have no idea what Gabriel's wife Sara's maiden name was. Perhaps Gabriel's presence in Husiatyn (and the birth of his son Moshe there in 1851) had nothing to do with the Rebbe and everything to do with his wife's family.

Now if I could only get some DNA from a couple of Gabriel's putative descendants and from the Zellermayer granddaughters, I could perhaps muddle the picture further.

A happy Purim to everyone.

1 After considering that Gabriel is probably the son of Nachman Pikholz, it is tempting to think that Chaje Cirl (top right corner of the tree chart) might be his sister. But we are pretty sure that Nachman had a year old daughter Cirl who died in 1840. That pretty much rules out his having a daughter Chaje Cirl who had a child in 1848.

2 The handwriting on the 1836 death record is not clear, so I crowd-sourced it on JewishGen. The results were Nisin-32, Ruven-10, Bevin, Nevin and Besin five each, and a handful of names with one "vote" each. In fact, we know that there were Zellermayers in Husiatyn named Rubin. We do not know of any Nisin (Nathan, Nisan, etc.)
Posted by IsraelP at 7:30 AM