Simon Pikholz and the Waltuch sisters
Simon Pikholz lived in Skalat. We don't know who his parents were, but we think he is closely connected to my own family. (It would help if some of his living descendants would take DNA tests, especially the one male line descendant who could do a Y test. Thusfar no one has agreed to do so.)

Anyway, Simon was married to Dwore Waltuch, the daughter of Herz and Lea, also from Skalat. They had two daughters that we know of - Lea and Breine. Breine was born in 1860 and Lea probably before our earliest Skalat records in 1859.

Lea married Berl Pfeffer and I have written a bit about her children here. We know nothing about Breine aside from her birth.

Dwore died in 1861 at age twenty-three and as was customary when there were small children,
Simon married within the family soon afterwards. His second wife was Chana Waltuch, Dwore's sister. They had nine children (1863-1885), four of whom died in childhood, four went to the US and for one we have only a birth record.

We have no record for Simon after the birth of the last child.

Chana and her son Max followed her two daughters to the US in 1892 and by all indications,she was a widow. She lived in Elizabeth NJ until her death in 1923. We have census and other documents for her daughters Malka Dwojra (aka Dora) and Ryvka (aka Beatrice) and her son Max and I am in occasional contact with descendants of all three.

Jossel Leisor and his children
There were five Pikholz births in Skalat in 1881, three more in nearby towns. Jossel Leisor was born to Schimon and Chana on 25 July.

We next see him getting married in 1899 to Katie Smith in Elizabethport NJ. Katie's parents came from Russia and somehow in the US Lechowitz became Smith. The Smiths lived in Philadelphia and the young couple did as well. The 1900 census says that Joseph (who for some reason is called John) worked as a window cleaner.

Joseph and Katie had four children in fairly rapid succession - Sam, Ida, Selma and in 1906,
Leonard J. Pickholtz. Katie died in November 1909 and is buried in an unmarked grave in Har Jehudah Cemetery, Upper Darby PA. In the 1910 census, Ida is in an orphanage, the other three children are with the Smith grandparents and Joseph is nowhere to be seen.

By the time of the 1920 census, the elder Smiths have died, Leonard and Selma are in other Philadelphia orphanages and Sam has disappeared. Still nothing on Joseph. We began working on the assumption that he was dead, but could find no trace of death or burial. And none of the descendants of his brother and sisters had ever heard of him. As though he had been some kind of black sheep.

Much of the work on this family was done by Steve Pickholtz of New Jersey, who grew up in Philadelphia. We were joined in this search by a descendant of one of Katie's sisters.

Joseph's older sister Dora had gone to the US with my grandfather's first cousin Sara Frankel, who had ended up in Denver, so I had this cockamamie theory that Joseph had gone to Denver to join family and look for work. I brashly predicted to Steve that we would find that he had died in Denver or en route, probably while Katie was still alive. I even considered that he died before the youngest child was born and that "Leonard J." would turn out to be in memory of Joseph Leisor.

We found a directory reference to Selma Pickholtz in New York in the 1930s. And a file for Ida showing that she had married in 1922 and had a son and that she was in poor health. Steve made contact briefly with the son a few years ago, but we have not been able to find him again.  He knew nothing of the family history. Ida died in 1938.

Ida's file included the name Pickford and it took quite awhile for Steve to convince me to follow that up. He was right.

Sam indeed had become Pickford. He added five years to his age when he married an older woman, Lillian, but he kept the same birthday, making it easy to recognize him. He married in 1917 and took on her son and daughter. In 1919 Sam and Lillian had a son.

Sam died in 1996. Lillian's family has a plot in Montefiore Cemetery in Philadelphia and they are buried there. So are the two sons - the younger one in an unmarked grave. Ida too is in that family plot and her grave also contains the remains of an unnamed daughter of Lillian's older son.

I phoned the cemetery to ask about Ida's grave and it turned out that the woman who answered the phone at the cemetery had been a neighbor of Sam and Lillian. She told me what she could. She knew Selma, who had married in NY - there were no children. She knew nothing of Joseph or of Sam's brother Leonard. I think she felt she had spoken too freely and she never took my calls again or answered my letters. When I visited the cemetery three years ago, she had retired.

We corresponded for a couple of years and she tried to do some family research. Then she died. Leonard's other son died a bit later, as did the first wife.

So what happened to Joseph?
Joseph was definitely alive in 1909-1910, involved in some matters that are better not spoken of. There is an indication that he had spent some time in Pittsburgh before that.

Then I found this. 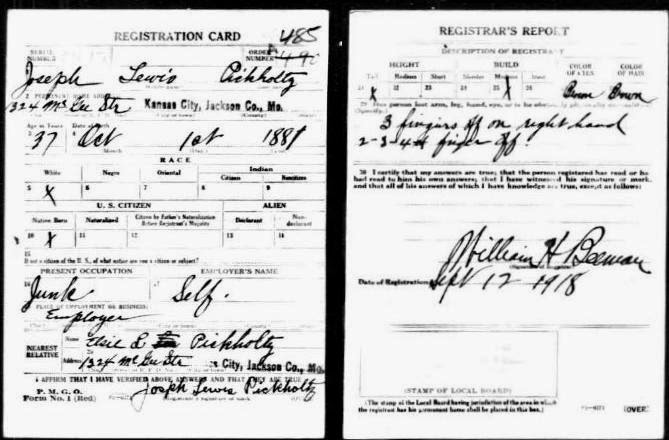 Joseph Lewis Pickholtz, born 1 October 1881, registered for the draft in Kansas City Missouri in 1918. He is married to Elsie, is in the junk business and is missing three fingers on his right hand. "Lewis" is a reasonable substitute for "Leisor" and the birth year is correct, though not the full date.

There is a Joseph Pick in Perth Amboy in the 1920 census, born in Galicia in 1881. He said that he came to the US in 1906. With him were his wife Catherine and children John, Joseph, Josephine, Mary and Sophie. Catherine and John entered the US in 1913. It looked too strange and I never followed it up. Perhaps I should.

I considered that he continued his life with the 1 October 1881 birth date that was on the draft registration and just for sport, I looked up people named Joseph with that birth date in the Social Security Death Index, which normally begins in 1962. And this turned up.

The middle initial "L" again. He died in 1953, when we generally do not find SSDI results. And Gatewood certainly sounds like something that could have been derived from Pickholtz!

I went to the 1940 census and found him with his wife Pauline, twenty-four years his junior, in Natchituches Louisiana. The census record says he was born in Kentucky and was a farmer.

Unlikely to be our guy? You bet. I ordered the death record from the State of Louisiana. His parents are not Simon and Anna, but John Gatewood and Amanda Smith, both of Hartford Kentucky. Close but no cigar.

Back to the drawing board.

Housekeeping notes
Motel Weissman died last week. He was born in Skalat ninety years ago and was the person who said kaddish at our annual Skalat memorial.