Until about a year ago, east Galician records were available from the AGAD archives in Warsaw, based on the indexing done for JRI-Poland. During the previous five years, I had placed about two dozen orders for these records - for my own research, for other people and occasionally for research clients.

Then last year, AGAD put those records online and there was no longer a need for these cumbersome orders.

But in the meantime, new records have become available, some listed at JRI-Poland and some in the All Galicia Database of Gesher Galicia and among them were a few records I wanted. This order took a long time to put together because I kept hoping that additional indexed records would be posted, but finally I decided to go with what I had.

Seven records in this order were for other genealogy researchers, six of them for people in Israel. One wanted his record to help him acquire Polish citizenship. Two others were for a man in my shul, whose family comes from Rozdol. The other nine were Pikholz records.

All told, there were a dozen births, five marriages and one death. Seven were from Podwoloczysk, four from Rozdol, three from Lwow, and one each from Drohobycz, Rohatyn, Skalat and Zbarazh.

The records arrived a few days ago via an online link. The total of eighteen were actually seventeen, as two of the Rozdol records were on the same page. In one case, they sent the wrong page and I have requested a replacement.

So here are the nine new Pikholz records.

Nachman, born to Abraham Pickholz and Lea Gelbling in Drohobycz
We already had a death record for this child. He died after only sixteen days. The birth  record shows that he was born 21 September 1911.

We do not know for certain who this Abraham Pickholz is, but I would guess he is part of the family we call IF2, where the name Nachman is prominent..

We know of two sisters before born Nachman, Hinde Feige and Sara Rivka.

Sara Lea, born to Markus Pickholz and Blime Jubjener in Rozdol
Here too, we cannot identify the father's place in the Pikholz structure, as the name is common and there is no identifying information on the birth record. The mother's name also appears as Jupiener.

The birth date is 19 July 1904. The couple had older children Matias and Gittel and a younger son Michal.

Gittel Rappaport, born to Josel Rappaport and Ryfka Luftschein Pickholz in Rozdol
We know this family, although the living descendants have not been willing to speak to us.

family went to the US in the late 1920s. Gittel was the second of four children. She married Mayer Heilweil and died at age thirty-two.

Gittel's mother is the daughter of Fischel Pickholz and they lived in Bialkes, near Skole - which is where her older brother's birth was recorded.

Josel Rappaport  was from Zurawno - so Gittel must have been born when they were visiting some part of her mother's family in Rozdol. The birth was 1 January 1905.

Izrael Pikholz, son of Moses Hersch of Kaczanowka, recorded in Zbarazh
This is a death record. Izrael is thirty-five, died of cancer and was married. He died 20 April 1909 and was buried the following day in Zbarazh.

We know this family. The deceased had five younger brothers and sisters that we know of.

The best fit I see for Izrael is a man who married Ester Lyncyz. They had a daughter in 1901 who died at birth. But maybe not. 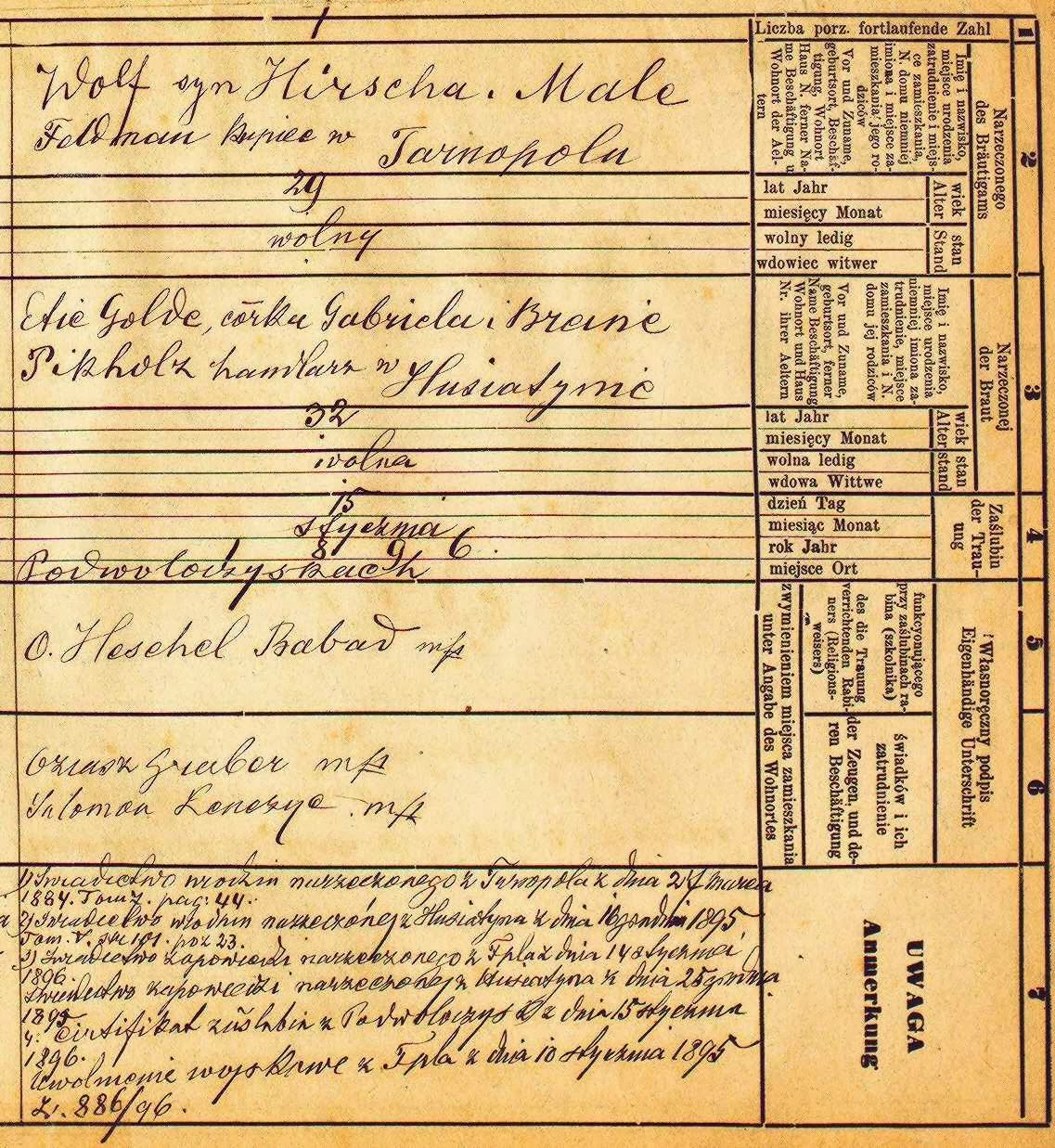 This is an odd one. The marriage took place in 1896. The bride is identified as being thirty-two years old and her parents are from Husiatyn. But Gabriel Pikholz of Husiatyn died in 1852, a dozen years before Etie Golde was born. And in any case, the wife of that Gabriel was Sara, not Breine.

The groom is Wolf, the son of Hersch and Male Feldman of Tarnopol.

There is a four-part note which appears to be just technical matters, but we are trying to determine if there might be some interesting information there.

And perhaps there is a Feldman descendant out there somewhere.

Abraham Eisig Pikholz (Zellermayer) marries Basie Pudles in Podwoloczysk
This is a record that I have wanted for years but had my doubts about ever finding.

We knew that Abraham was a grandson of Eliezer and Chane Chaje Pikholz, but had no idea what his mother's name was. Abraham and Basie had three children who all lived in Israel. One granddaughter is a well-known (if you are old enough) radio personality who in recent years has been writing Hebrew subtitles on Sponge Bob and other cartoon shows. Another granddaughter is the wife of an old boss of mine.

So now we have the record showing that Abraham's parents were Zalmen Hillel Zellermayer and Ettel Pikholz, that he had a second name Eisig, that he was born in 1883 and that the marriage took place 29 June 1909.

There is also a lengthy note which we are working on. After we get that figured out, I'll send the record to the granddaughters, as best we can tell, my fourth cousins..

And they had a son in Podwoloczysk
In May 1910, Abraham and Basie have a son. We knew this, of course, but now we have the birth record.

Jente Halpern (Pickholz) marries Schamschon David Sirki in Podwoloczysk
We know this family - or at least we know the bride's parents. She was born in 1884 to Joel Halpern and Chana Pickholz of Husiatyn. Chana is the daughter of Gabriel and Sara whom I mentioned above.

The marriage took place in 1911. One of the witnesses, Salomon Lynczycz was also a witness at the marriage of Etie Golde above. We have two Pikholz men married to Lynczycz women, but I don't see a connection between either of them and a Salomon.

I have not seen the surname Sirki anywhere else. I'd really like to find a descendant.

Ester Reizie, born to Basie Pickholz and Schaje Wolf Jorysz in Podwoloczysk
This is the fourth child we have for this couple. The birth was in August 1909. Ester Reizie was married in Grzmaylow in 1939 to Ojzer Swartz. (We also have a marriage for her older sister.)  We have nothing further.

Basie - or more properly Chaya Basie - is the daughter of Josef and Fradel Taube of Tarnoruda. This should be the RITA family. We do not know if Josef or Fradel Taube is the Pikholz.

I am told that there has been a new transfer from the Civil Records Office to AGAD, but we do not yet know which towns' records those would be.