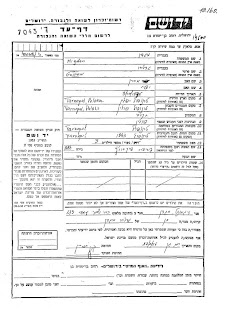 Zygmundt Migden
Back at the beginning of my research, I found a Page of Testimony at Yad vaShem in the name of Gustaw Migden of Tarnopol. He was killed in Tarnopol in 1943.

The Page listed Gustaw's wife - Freida Pickholz, born in 1886 - and three unnamed children. There was no other information about Freida and I did not recognize her from my work to that time.  The Page was sumbitted in 1956 by their son Zygmundt, a resident of Beer Sheva.

I made some inquiries and eventually learned that Zygmundt had lived in Ashkelon and had died in 1986. But the local burial society didn't have him - not in the old cemetery and not in the newer one. Zygmundt had been born in Tarnopol in 1913 and had made aliyah in 1936, a single man.

I renewed my search for Zygmundt from time to time and the road kept leading to Ashkelon, where it ended abruptly.

In the meantime, new records became available and I found the marriage record for his mother Freida Pickholz. She was born 25 November 1885 to Josef Pickholz and Sussel Gruberg. We knew Sussel, who died in Karlsbad in 1928, but did not (and still do not) know anything about Josef's family. Eventually, I found Freida's two brothers and younger sister. One of the brothers seem to have died young, but the other two lived in Lwow and their small families included several physicians.

According to the Page of Testimony, Zygmundt was one of three children, but all I found was an older sister who died as a child, before Zygmundt was born.

Eventually, I came back to the burial society in Ashkelon and I spoke with someone in the office who looked once again and found nothing. Then she said "Wait a minute" and she gave the phone to an older gentleman who had just walked in. I asked him my question and he said "I think he is in Adivi."

The Adivi Cemetery
Rehavia Adiva was the first mayor of Ashkelon (1965-1972) and when his married daughter died at age twenty-four in 1953, he bought a piece of an orange grove near the cemetery and buried her there. Over the years, he and his wife were buried there as well as assorted others.  Over forty in all.

He gave me directions and I went to the site. Follow the dirt road around the side of the old cemetery, then further along a dirt road to the right. Look for the cemetery inside an orange grove on the left.

And there it was. Hidden inside the orange grove. No sign or anything.

I spent the better part of an hour, recording the names on the stones and taking photographs of the four Migden graves. They are side by side - Zygmundt, his wife Helena, their fourteen year old son Gedalyahu and Zygmundt's forty-seven year old unmarried brother Dr. Meir Migden. Meir's grave has a plaque in memory of Gustaw.

When JewishGen inaugurated JOWBR, I decided that I should enter all the graves in this cemetery, but Ashkelon is not on the way anywhere, so it waited.

Adivi Today
About sixteen months ago, I was in Ashkelon with my wife and youngest son and we decided to photograph the whole cemetery. It was easier to find this time, as the orange grave was gone. There were still the dirt roads, but you could see the cemetery from a distance. 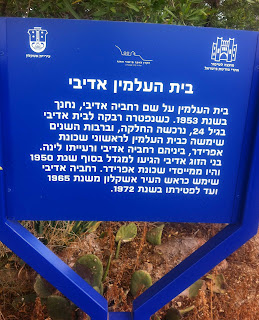 There was a sign - a sure indication that someone had taken responsibility for maintenance. In this case, the Council for Preservation of Historic Sites and the City of Ashkelon.

There didn't seem to be any preservation going on - no fence or anything and no obvious maintenance. There has been a bit of vandalism.

We took photographs and made handwritten notes on the ones where the epitaphs were not clear. When I got home, I saw that some of those photos were not good enough, so another visit would be needed before submitting it to JOWBR.

The oppotunity for that came a few days ago. I went to Ashkelon with Dvorah Netzer, to meet my putative cousin Vladimir. Dvorah's Russian-speaking Medved cousins generously agreed to host the meeting and to help with the communication.

After that meeting, Dvorah and I went  to the cemetery to finish the photography and I passed on the pictures and the data to JOWBR that same evening. Occasionally, something actually gets crossed off my to-do list.

Housekeeping notes:
1. Next week begins a three-part series on the huge breakthrough on our family structure, based on DNA testing.

2. A colleague of mine in Europe writes as follows:


I am writing to you because I have an iPhone / iPod / iPad etc game developed, the name is Famble. It is the classical word search game - but the words you are looking for are Jewish surnames. It is so funny if you have to find your ancestral surnames, my wife, who is neither a big genealogy fun, nor plays around with computer games, laughed out when she tried Famble and found both times a friends' names popping up. Here is the link:
http://itunes.apple.com/us/app/famble/id543534434?l=hu&ls=1&mt=8

It is also possible to add one's family names to the game, currently it has some 3,000 names in it.

I don't have any of these devices, so cannot venture an opinion. Just passing it on.
Posted by IsraelP at 10:00 AM