A SINGLE DNA TEST TURNS MY GENEALOGY ON ITS HEAD

(Part two of three)
Here is part one

Hey, let's do some DNA testing! What fun.

A few weeks ago, I told you about a Polish woman named Joanna who learned that her grandfather was the son of a Pikholz man whom we have tentatively identified as one of the sons of Josef Pikholz of Klimkowce. (We thought it might be Josef himself, but he seems to have died a bit earlier.) Josef has a great-grandson here in Israel named Jacob, who is an active participant in our Pikholz research. In order to determine that this story is true, I suggested that Jacob and someone in Joanna's family do autosomal DNA tests.

As I say, I discussed this in detail awhile back.

Of course in order to apply the results of Bronislaw's Y-chromosome test, we would need to check the Y-chromosomes of the other Pikholz branches. There are seven such branches for which I can identify candidates for testing.

1. Last week, I discussed Mordecai Pikholz (1805-1864) who appears to be closely related to Isak Josef Pikholz (1784-1862). The twenty-one year age difference could fit father and son or brothers or uncle and nephew or any sort of cousins. Isak Josef has no male line that we know of, but Mordecai has a great-great-granddaughter, Dalia, who is very interested on our project. Dalia is not eligible for a Y-chromosome test, of course, but she could do an autosomal, while her late brother's son does the Y-chromosome. So let's test Dalia and her nephew. They agreed and did the tests.

2. Vladimir lives in Ashkelon and is the great-grandson of Jachiel ben Mordecai Pigoltz. This could be the same Mordecai as Dalia's, making Vladimir and Dalia third cousins. So let's test Vladimir. His test is being processed now.

3. Aryeh Leib is almost certainly a son of Dalia's Mordecai, but he has no male line. However, his daughter Ettel (b. 1860) was married to a Jachiel Pikholz of whom we know nothing. Jachiel and Ettel have a male line to a great-grandson named Lloyd, in the United States. A Y-chromosome test would tell us something about Jachiel. An autosomal would be unpredictable because both parents of his paternal grandfather are Pikholz, but that could lead in interesting directions. So let's test Lloyd. He agreed, but hasn't done it yet.

4. Mordecai (Pikholz) Allon died here a few years ago. His family was from deeper in Ukraine, but there is a good possibility he is part of a Skalat family. His three children live in the US and I am in touch with Daphne. Let's test one of Daphne's brothers. She agreed, but no one has done it yet.

5. The family of Simon Pikholz went from Skalat to New Jersey in the 1890s. This family appears to be close to mine and to Dalia's. Simon has one great-grandson from a male line and I am in touch with him intermittently. He is a bit elusive and does not always reply. But since we are doing it, let's test Simon's great-grandson. I asked him and he has not responded.

6. Yaakov Pikholz, his son Israel Aharon, their wives and five of Israel Aharon's children spent the War in the forests around Skalat. The young adults survived. We have no idea how they connect to anyone else. One of the two sons, Moshe, is still living. I have never had contact with him, though I have with his older sisters. Let's see if we can test Moshe. I wrote a letter and received no response.

7. Jachiel and Israel were brothers. Jachiel had three daughters who went to the US before World War I and I am in touch with some of their descendants. Israel had two sons here in Israel, one of whom has a living son Aharon who has had absolutely no interesting in contact, though he did refer me to his sister. Let's see if we can do a test for Aharon. I wrote a letter - even cc'ing his sister - but received no response.

Perhaps some of them are simply not willing to spend the money.
We also have several other families with four or more generations for whom an autosomal test could be very useful, once we have results from some of those listed above. But that will come later.

We also have a number of smaller families, but in most of those cases we have no evidence of living members for many years.
I realize the irony in all of this, particularly the autosomal tests. In one of my first blog posts, I  wrote about my skepticism of this whole testing business, calling it "smoke and mirrors." There is just too much that is based on probability and guesswork, especially once we get into fourth and fifth cousins. (Not to mention that the website of the testing company does not always make it easy to understand the analytical tools they offer.)

But I figured if we were doing this, I should do an autosomal test myself. Who knows what might show up.

Reasonable preliminary results
My autosomal test (the company calls it "Family Finder") showed thirty-five third cousins, only one of whom was someone I could account for - and he is on my mother's side. He is at best a fourth cousin and none of the others appeared to have any chance of being third cousins in any direction, based on my previous research.

﻿ But even the ones that both my aunt and I match could be either on my grandfather's side or my grandmother's side, so I enlisted my father's first cousin Herb. Anyone he and I both matched would be on the side we are looking for. Cousin Herb took the test.
﻿﻿﻿﻿
Dalia's results came in. She shows up as a "suggested fourth cousin" to me. That's about what I would have expected. Dalia is also a "suggested third cousin" to my aunt, which is also about right. But oddly enough, Dalia is a "suggested second cousin" to Herb, which is definitely too close. Well, Dalia and Herb are both Galizianers on both sides of their families, so there could be an additional connection between them that we don't know about.
﻿﻿﻿﻿

Then came the big surprise. The one result that no one had considered. A result that contradicted one of my most basic understandings. A result that was based on a comparison that we hadn't even intended to make.

Dalia's nephew's Y-chromosome test. And my own Y-chromosome test. They matched perfectly. Thirty-seven out of thirty-seven matches. No smoke and mirrors here - just a straight Y-chromosome, not affected by other sides of our families.
My great-great-grandfather Isak Fischel is not from some family that I have to look for. He is a Pikholz. All this business about how my great-grandfather got his Pikholz surname from his mother - flat wrong. His wife still appears to be a daughter (or maybe granddaughter) of Isak Josef Pikholz, so it seems both parents of my great-grandfather were Pikholz. Why did they live in Zalosce, rather than in their birth town Skalat? Who knows.

According to the company's website, a match like that gives a probability of over ninety percent that my Isak Fischel and Dalia's Mordecai are brothers and the autosomal tests just strengthen that. I ran that possibility by the DNA discussion group on JewishGen and had some cold water dumped on me. But I consulted with the genetic genealogist CeCe Moore and she says they almost have to be brothers. Some others thought so too.

I am aware that the fact that Isak Fischel's wife is almost certainly a Pikholz may make these relationships seem closer than they are, but the testing company says that their system "prevent[s] over predictions due to intermarriage and reflect[s] more accurately your relationship to other Ashkenazi Jews in our Family Finder system."

I don't know if this means that I can officially record Isak Fischel and Mordecai as brothers or not. Perhaps the citation police consider this no more than supporting evidence, but it is certainly good enough to put it on a wall chart. If I had a wall chart. (I'd love to see your thoughts on this in the "Comments" section below.)

Either way, the web site will have to undergo major revisions, but not just yet.

I also do not know if we can strengthen this conclusion by upgrading the Y-chromosome test. Dalia's nephew and I had 37 matching markers, but they also do tests for 67 and even 111 markers. I actually tested for 67. So if we upgrade his to 67 or both of ours to 111, would we get results which would be recognized as "fact?" I have been getting conflicting "expert advice" on this question - some say that 37 is sufficient, others say we should both upgrade to 111, which would be a significant expense.

And how much do the autosomal results that we have vis a vis Dalia count? They certainly should! But here too, there are different thoughts from different people. There is a conservative view that DNA can never prove anything - only report on probability. 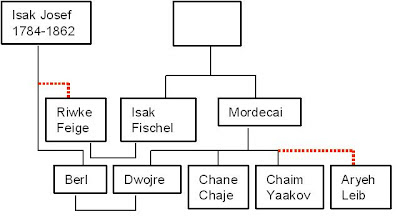 And there is more. But this is enough for now.

One thing for certain. When someone says "What do you hope to prove with this test you want me to do?" I don't really need a specific answer. "You never know what might turn up" is my new mantra.