I have decided to put this into a blog format so that everyone can see everyone else's comments. Please sign your name to comments, with something that indicates who you are. You can also write me privately by email if you wish to say something not for general consumption.

I have tried to bring this to the attention of most of the relevant Pickholtz descendants, to a number of the descendants of Schewach Wachs (of Podkamen), to the genealogy researchers who responded to a question I posted on jewishgen.org a few weeks ago and to some of my gen-friends whom I think might be interested.

BACKGROUND
There are two bits of background:

Isak-Fischel and Rivka-Feige had four children that we know of - Yechiel, Leah (married Yaakov-Hersch Brunn/Braun), Bassie (married David Lazel Frankel/Franzos/Francis) and Hersch (married Jutte-Leah Kwoczka), during the approximate period 1843-1855.
Yechiel's family was lost in the Holocaust, Bassie's family was largely in Denver (though she and her husband were in the New York area) and Leah and Hersch lived in Pittsburgh, though Leah lived for a time in Denver as well.  Hersch is my great-grandfather.

David Lazel Frankel was from Skalat, where the Pikholz families (including Rivka-Feige) came from, but the spouses of the others were from Zalosce, the next town over from Podkamen.  We have access to birth records from Zalosce for 1877-1890 plus quite a few years of death records, though these have little actual information.

In the course of my genealogy work over the years, I have sought out records of anyone named Izak-Fischel or Fischel-Izak, particularly in the records from east Galicia, just to see if something might turn up. Of the six I found, two lived in Tarnopol and one lived near Skalat, but there wasn't much I could really do with any of them. (Fischel is usually found as a Yiddish form of the Hebrew names Ephraim or Yeroham.  We know that our Isak-Fischel is Yeroham, not Ephraim.) I suspect something may show up in nearby Brody, but I haven't found anything yet.

Where the Braun and Wachs connections fit in
My father's first cousin, Herb Braun - who lives in Florida - is named for Hersch Wachs, who died 20 March 1917 in Pittsburgh. Hersch Pickholtz, Herb's grandfather, was alive at the time, so Hersch Wachs must have been quite close to the family. (We don't name for living relatives, so using the name while the grandfather was alive would be unusual, even if it were after someone else. So I figure it has to be someone important.)

When Herb told me this about a dozen years ago, I made contact with a number of Hersch Wachs' descendants.  Some of them were aware of a vague connection with the Pickholtz family, but aside from Herb, no living Pickholtz descendant had ever heard of such a connection.

When I made some broader inquiries, I learned that the brothers Zale and Chatzkel Anis - whom I knew well during my brief Chicago period forty years ago - were descendants of one Schewach Wachs and Chatzkel had a tree that included the Hersch Wachs from Pittsburgh, as well as his namesake who was born about 1814. Chatzkel put me in touch with Lenny Schorr - a native Pgher living in Haifa, whose grandmother was Devorah Feige Shapiro, the sister of Hersch Wachs. Lenny told me back then that the Wachs were not related to the Pickholtz family, but to the Brauns - Herb's father's side.
﻿﻿
That's where things stood until this past summer.

Feige Rifke Silbermann, daughter of Chana Wachs
Last summer, I was preparing a large order of east Galician records from the AGAD archives in Warsaw and while looking for something else, I happened to see a listing in the JRI-Poland index for Feige Rifke Silbermann, daughter of Chaskel Silbermann and Chana Wachs. This Feige Rifke was born in 1878 in Tarnopol, which is the provincial capital of an area which includes all the small towns I mentioned above. The juxtaposition of my great-great-grandmother's given name Feige Rifke and the surname Wachs was intriguing, so I ordered the birth record, without doing any further research in the index.

The record came in early December and much to my amazement, it showed that Chana Wachs' parents were Isaak and Feige Rifke Wachs. Those are the same given names as my great-great-grandparents', minus the "Fischel."  My first thought was that this was perhaps the same couple and that there was a fifth child, Chana, whom we had never heard of. Not to mention perhaps finally putting a surname on our Isak Fischel.

That euphoria didn't last long.  I went back to JRI-Poland and found the marriage record for Chaskel and Chana.  Chana was born about 1842, which - if she had been a sister to my great-grandfather - would have made her the oldest, but well within the normal range of birth years. But the marriage record also showed that her father was not Isak Fischel, but Isak Leib.  Still it was worth following up.

I also posted on several of Jewishgen's message boards as follows:


Does anyone have any Isaac WACHS references in the mid-late 1800s, particularly one with a daughter Chana who married Chaskel Silberman?

These would likely be in (or from) the Tarnopol area.

I also went to the JewishGen Family Finder (JGFF) to see who else was researching Wachs in the right area and sent those researchers a similar message.

I received a number of responses, none of which made specific contributions to my search. All those who responded have been invited to this conversation. 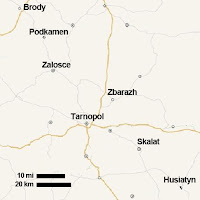 I then touched base with Chatzkel Anis and Lenny Schorr and had another look at the list of Schewach Wachs' descendants. Perhaps the most striking thing there is the total absence of anyone named Isak. Schewach Wachs (b. ~1770-1780) was known to have had seven children, but the chart has names for only four of them.  (See Diagram 3, above.)

One of those sons is connected to the town of Husiatyn, a town the other side of Skalat.  (The chart says "Rusiatyn," but that is surely an error.) The Husiatyner Rebbe had a large following in Skalat, so those towns were well connected to one another. One of the researchers in JGFF has Wachs in Husiatyn.

It is entirely possible that one of the less developed lines from Schewach Wachs has the Isaks. And it may or may not have anything to do with our Isak Fischel. But I can't just walk away from it.

I have been trying to make contact with the keeper of the Schewach Wachs chart to see what she might know and what her sources are.

Incidentally, this index entry, which I just found now, is particularly interesting

and I will include it in my next order, in the spring. It is from Mosty Wielkie, which is about 55 miles NW of Podkamen and includes an Isak whose surname is both Schewach and Wachs and who has a specific connection to Podkamen and Brody.

That's it for now.  Thank you for your attention. (If you click on the images, you can see a larger version.)
Posted by IsraelP at 4:21 PM