At least five of my wife's ancestors died in Shevat, all in the last seventy years. Four of those five have their yahrzeits this week. My wife's maternal grandfather, Mendel Baum, died seventy years ago and in reverse order my wife's father, HIS mother, HER mother and HER father - four generations. 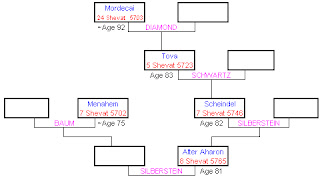 MENDEL (Menahem) BAUM was born in Vidrany (Slovakia) in 1867. He went to England a few years before WWI as a widower with no children. His landlady brought her niece from Poland to marry him and they had five children - one of whom died in early childhood.

He was a very learned man and was the study partner of Rav Avraham Yitzhak HaKohen Kook, the Chief Rabbi of Eretz Yisrael during the Rav's WWI exile. (The Rav was the sandak for his eldest son.)

MORDECAI DIAMOND was in England in time for the 1901 census, where he appears with his wife Beile Gittel (Betsy) and younger daughter Tova. An older daughter was already married and her husband had preceded them. (The husband is the only one for we have documented immigration information.) I am working with a descendant of the older daughter to nail down as much information as we can about the Diamonds. The family came from somewhere near Warsaw, perhaps Plock, and their name was probably more like Diament.

TOVA DIAMOND was nineteen in the 1901 census and soon afterwards married Moshe Avraham Schwartz (originally Scharf).  They had four daughters and two sons. Tova died 5 Shevat 5723 (30 January 1963).
﻿﻿﻿﻿﻿
﻿﻿﻿﻿﻿
JANE/SCHEINDEL SCHWARTZ was Tova's eldest daughter, born 5 June 1903. She married Jacob Harry Silberstein and they had three sons, one of whom died just before his twenty-first birthday.

The family was in the restaurant business in London.


Jane and Harry's eldest son ARTHUR AARON (Alter Aharon) SILBERSTEIN was born 4 Kislev 5684 (12 November 1923). He married Esther Baum on 23 December 1945 and they had three sons and a daughter. He worked with his father and grandfather in the family restaurant, eventually bringing his family and the restaurant on aliya in 1969.